In today’s lesson, we look at how to use vibrato on guitar when creating memorable guitar solos. Vibrato adds expression to a note by moving the pitch up and down which allows a note to have a more vocal, human quality. There are many ways to use vibrato on guitar, but in this lesson we are going to examine the modern rock ap-proach to this fundamental technique. Be sure to watch the video that accompanies this lesson so you can see how I apply this technique throughout these three examples.

Knowing where to place vibrato in a lick can make or break the phrase. Although there are no hard and fast rules as to where to apply vibrato, it is usually applied at the end of each phrase to add emphasis. Example one demonstrates this by using vibrato at the end of bar one and two, showing the end of each lick.

Adding vibrato to a bend can be tricky to perform in tune, but the rewards far out way the initial effort. The aim is to add vibrato to the bend after the bend has reached it’s required pitch, keeping the original bend in tune. Watch the slowed down Ex-ample 2 video to see how I use this wonderful technique. 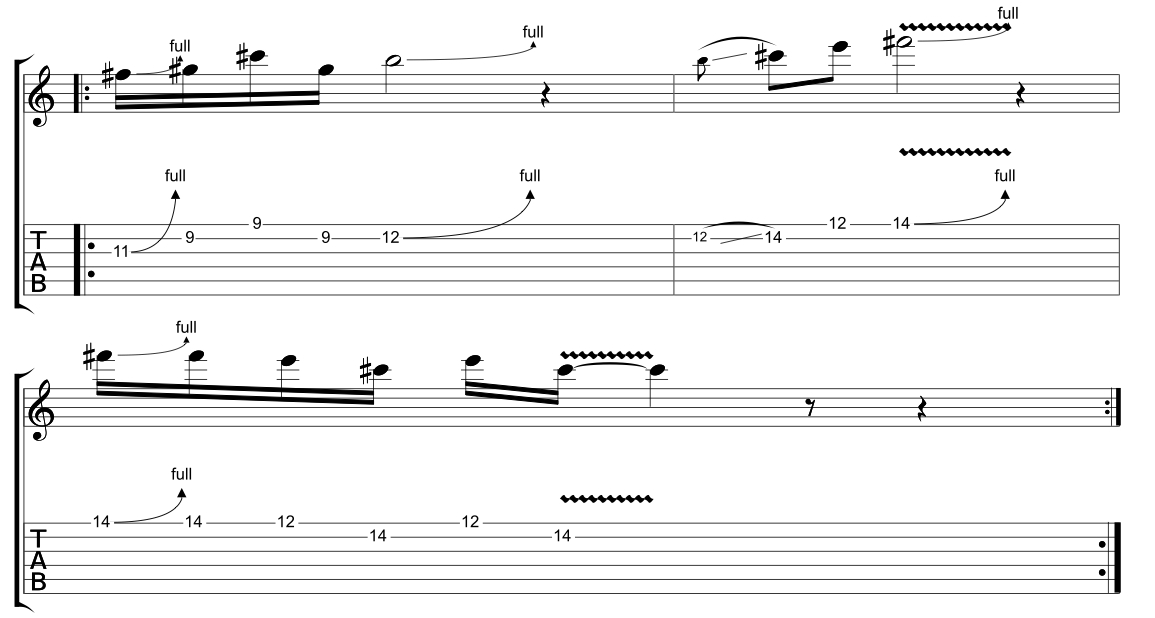 Example three shows a double stop lick that uses vibrato in the middle of the bar instead of the more traditional technique seen in example 1.

If you want to develop stronger vibrato technique, click here.

For classic vibrato guitar licks, I recommend buying the album “Texas Flood by Stevie Ray Vaughan.” My favourite track on that album being “Lenny.”

Hi YouTube, Simon here once again for the amazing Fundamental Changes. Today we’re going to be looking at some rock vibrato techniques to create your memorable solos. Let’s go and have a look at 3 examples of those just after this.

Being expressive on the guitar and adding in vibrato can often make or break licks, and it can be the thing that really, really develops your own sound. For me, it is the most im-portant thing to develop.

If you think of the best vocalist in the world, they all have fantastic vibrato. They go up to a note, and then they add the vibrato in. That’s what we’re going to do on the guitar as well, because we’re always trying to replicate the human voice when we’re playing this instru-ment.

When you’re doing these notes here, they’re all around C sharp minor pentatonic, C sharp blues. They shouldn’t feel too problematic. By now, you’re getting used to the backing track. If you haven’t seen the other videos, make sure you check those out.

The hard thing to add in is bend vibrato. What you want to do is bend up a note here on the start of Example 1. We’ve got 12th fret bend on the B, so you bend up, hit the pitch of where you’re bending to, and then add your vibrato in. You tend to go 1-2-3, and stop.

You’re going to go: bend up, 1-2-3, and stop. You’re going to try and keep it in tune at all times,not easy to do with bend vibrato. For me, after bar chords, it’s the 2nd hardest thing to teach and to get perfectly right. Take some time with it, practice it – you’re going to be on your 3rd finger when you’re doing these bend vibratos, don’t do it on your little finger.

The other vibratos, keep them nice and wide, pulling from the bottom of your wrist. You want this modern rock vibrato sound today. Obviously, you can try out other vibratos in a different time.

I hope you enjoyed Example 1. Let’s got and have a look at Example 2.

Okay, so similar ideas here, but coming up into position 2 of your minor pentatonic scale up around the 12th, 14th frets. Again, you’re bending up, hitting the note, and then adding the vibrato. If you listen to guys like Dave Gilmore, they get this love-ly swooping bend and then having their vibrato sounding so fantastic and memorable as well, emulating the human voice there.

Nothing too complicated here, check out the tab for more details. Let’s have a look at Ex-ample 3.

Usually, vibrato comes at the end of phrases, or the end of little bars, or the end of individ-ual little licks, like we’ve seen in Example 1 and 2, they’re generally ending bars and stuff like that.

This one I tried to throw a little bit of a curve ball in there, and I put vibrato in the middle of the lick. It can either be used to punctuate the end of our musical sentences, or it can be used as the highlight point in the middle of a sentence, just like me saying “and!”, it gives it an exclamation point instead of me just blabbering on full sentences in.

In this example we’re using some double stop 4th on the G and the B strings, sliding these in 2 different positions, and then getting this little fun C sharp minor pentaton-ic run with the big fat chunky vibrato at the 9th fret.

You can see my wrist there – The vibrato is really coming from the wrist in this part down. I’m pulling the wrist downwards towards the floor, and bending and manipulating the pitch of that note, but always coming back to the underlying pitch, which is what you want.

You don’t want to bend it out of tune and vibrato and wobble it, you want to have the pitch that you’re working on, and then bringing it in and out of that pitch by manipulating the strings.

I hope that’s given you something to work on. You can of course practice vibrato on all of your fingers, but the little finger is not going to come up so often. Index or first finger will come up all the time, middle fairly often, ring finger will be used mainly – your 3rd finger – mainly for vibrato when you’re bending. Those are the main exam-ples there.

Vibrato and bends takes some practice, vibrato and your notes – fill out your phrases by adding in vibrato to your normal blues and rock licks. See where you can add it in, see where it fits well.

I hope you’ve got something from this lesson, and I will see you again soon for more les-sons. Take care.

Hi everyone, I really hope you got something from this vibrato lesson. Please head on over to Joseph’s website fundamental-changes.com, check out his books on Amazon, and go and have a look at my YouTube channel, SDP guitar for way more free videos to inspire you in your playing. Take care, see you next time.