In today’s lesson, we examine the use of bends in creating memorable solos. Exclusive to the guitar, string bending produces a smooth expressive sound perfect for rock and blues solos. By bending a string, you can create one (or several) new pitches, without the need for picking any other notes. Famous melodic rock guitarists including David Gilmour, Jimi Hendrix and Carlos Santana are all instantly recognisable by their unique takes on the string bend.

Unison bends provide a raw, edgy tonality to lead guitar solos. Make sure that the bent note is perfectly in tune, otherwise it will ring dissonantly against the fretted note. A fantastic example of unison bends in action is the song ‘Samba Pa Ti’ by the wonderful Latin rock king Carlos Santana.

When I first heard the track ‘Another Brick In The Wall Part 2’ by Pink Floyd I remember hearing the solo and being amazed at Dave Gilmour‘s two-tone bends. Bending the equivalent of four frets is never an easy task, however, I recommend using a light string gauge to help. I used 9-42’s on this video recording. Make sure to watch the YouTube video to see how I tackle this monster bend! 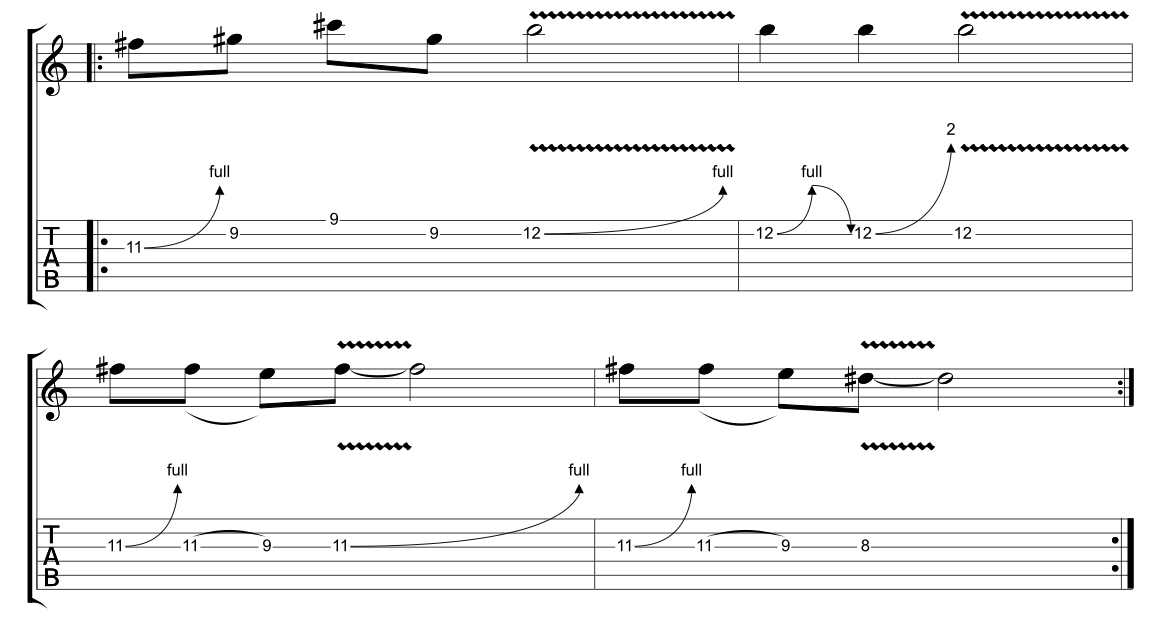 A technique I have recently picked up from the YouTube master Mateus Asato is to break up unison bends and pick the notes individually. Instead of creating a unison bend double-stop, playing each bend individually can sound softer and more melodic.

For classic slide style guitar licks, I recommend buying the album “The Wall – Pink Floyd.” My favourite track on that album being “Another Brick In The Wall Part 2.”

Hey, my lovely YouTubers. Simon here once again for the amazing Fundamental Changes. Today we’re going to talk about some techniques of using bends to create memorable solos, our 4th part here. Let’s go and have a look at 3 examples of that, just after this.

Today we’re not really looking at the traditional bend and things like that. I’m going to assume that most of you have come across how to bend, or how to bend in tune. I’m going to try and give you a few ideas that aren’t so common and mainstream that might give you some new flavors in your solos as well.

A great song example of unison bends is Samba Pa Ti by the Latin rock king Carlos Santana. At the end of the melody at the first part there’s some, and some bits throughout the solos and everything like that as well. The most important thing with a unison bend is that the bend is perfectly in tune, because you are bending to the note that you already have on, so if those 2 are slightly out, there’s going to be a real dissonance that can be a little bit unsettling.

Make sure you get those bends bang on in tune. You’ll see it in the slowed down version of this, that I tried to just demonstrate getting the bends nice and in tune perfectly straight away.

Bending is unique to the guitar. It’s expressive. The most famous guitarists have their own take on bends. One of my personal bend maestros is the magnificent Dave Gilmour from Pink Floyd. When I first heard Another Brick in the Wall part 2 solo when I was studying back at the institute, it just blew me away when I first heard the 2-tone bend, and some 2 and a half tone bends, because up to that point I had been doing traditional 1-tone bend, and little chord to tone bends, stuff like that.

Then I heard this enormous swoosh bend and I was like “I just had to have it.” Ever since then I’ve been using that. Once again, we’re using the same backing track that we’ve been looking at through the past 3 sessions. All of these examples are around a C sharp minor.

When you’re bending 4 frets here from the 12th fret, 2 tones up there to 4 frets, it’s going to take some practice to get that in tune. You can pick the note you’re bending to 4 frets up before you play this bend, and I recommend using light string gauge if you’re going to be attempting these massive bends.

I’m using 9 to 42s, Ernie Ball super slinky on here just to make things nice and easy for me, because obviously I’m doing this all day. Work on that bend – the rest of this lick, fairly straightforward C sharp minor. Classic Dave Gilmour tones, and work on 2-tone bends into your bending vocabulary. Let’s look at Example 3.

A technique I picked up from my favourite guitarist at the moment – a guy called MateusAsato. If you don’t know anything about him, click on the link in the article to a track that I’ve linked. The guy is a genius guitarist – is that he breaks up a unison bend, so instead of playing them at the same time like we looked at in Example 1, he picks 1 string, then picks the next string.

Then he goes through like a unison bend example, but picking 1 at a time. Pick the bend, pick the string adjacent to it, and go through your unison bends like this. It’s a really cool technique for applying notes of your C sharp minor scales up and down the neck, but not having it so raw as the unison bend.

This sounds a little bit softer, a little bit more melodic. Really cool sounds. So bends, obviously, there are – I could do multiple lessons on bends. I might well do a part 2 of this as well, because there’s so much I can cover.

Today I want you to think about unison bends, 2-tone bends, or bends above a tone or below a tone, but not just bending 2 frets all the time, and breaking up unison bends as well.

Hi everyone, thanks for watching this Creating Memorable Solos Using Bends. I really hope you got something from it. Check out Joseph’s books on Amazon, they’re fantastic value for money, so many examples and brilliantly well written.

Check out Fundamental Changes website, where you can see this lesson and tons more free lessons by top teachers, and also check out my YouTube Channel SDPguitar for way more free videos to inspire you in your playing. Take care, I’ll see you soon for more videos.