In this lesson, we are checking out three guitar licks in the style of Latin rock king, Carlos Santana. His style is instantly recognisable due to the Spanish influenced blues-rock licks, mixed with the rich, warm, overdriven tones produced from his PRS guitars.

Santana favours minor keys in his playing and Am7 is the chord that underlies this offbeat progression. The chord shape is easy to play, simply place normal minor barre chord shape at the fifth fret, and then remove your little finger. The ‘C shape’ F chord following the Am7 will take a little practice though.

I’ve added a little twist to the E7 chord, by including the flattened 9th  create melodic interest. 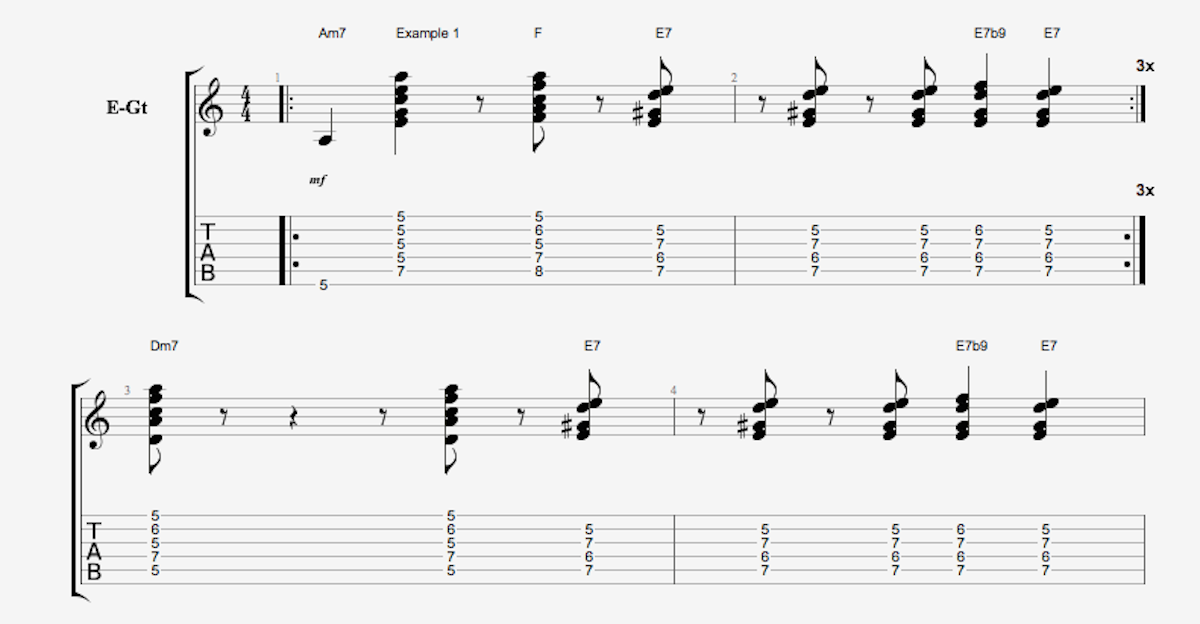 Tremolo picking is our technical focus here: Tremolo picking is sped up alternate picking on a single note. In this example we are using part of the A natural minor scale, working on one string  before ending with a classic Santana style use of triplets, and a resolving bend.

Try learning your scales on one string and then applying tremolo picking to them. It can sound highly effective, but use this technique sparingly. 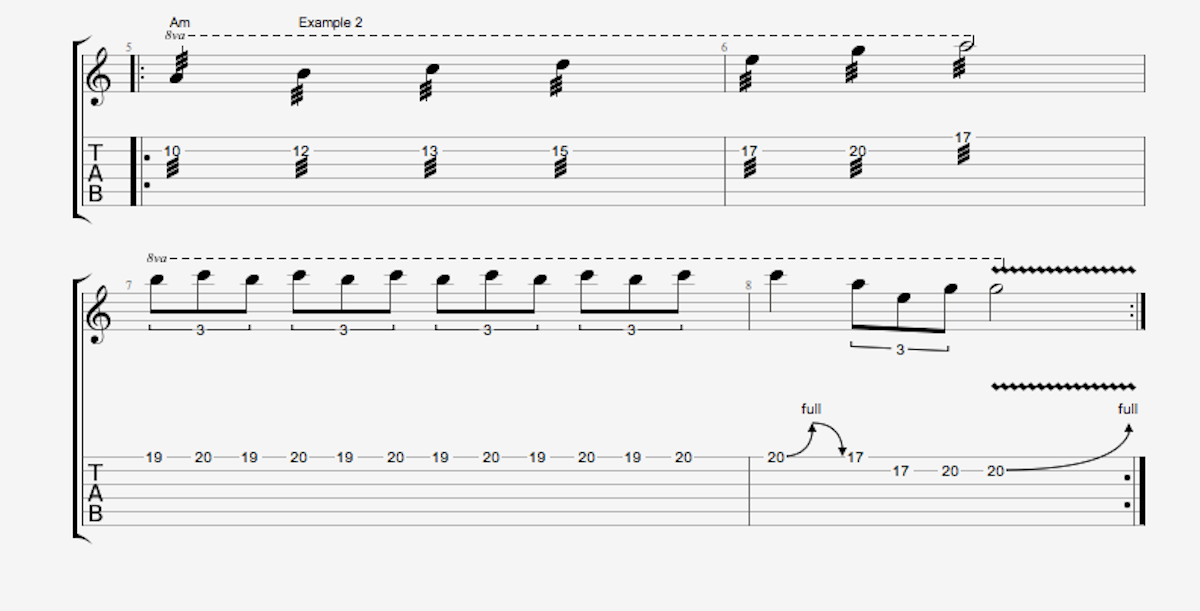 Santana infuses his blues licks with Spanish scales. In this lick, I created a melodic idea using the A minor pentatonic by adding in a G# note. This implies the A Harmonic minor scale (A B C D E F G#). I have included the scale shapes for A Harmonic minor in the first and 4th positions. 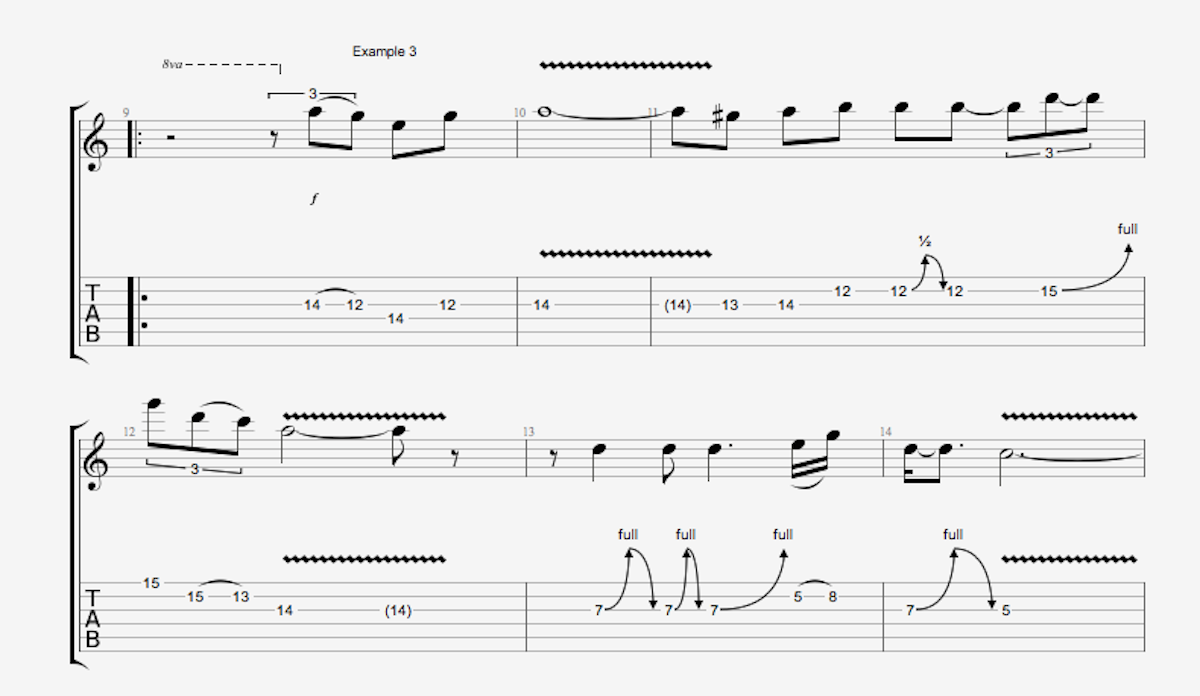 Hey everyone, Simon here once again for Fundamental Changes. Today we are looking at the Latin Rock King that is Carlos Santana, and a few examples in his style. I really think you’re going to like this. Let’s get to those just after this.

As you probably know now, Example 1 is going to revolve around a chord. The chord we’re looking at today in the sequence is an A minor 7. Now if you haven’t come across this chord before, it’s simply put, your E minor bar chord shape without the little finger.

Imagine your 5th fret E minor shape on the top, drop off the little finger. Now, the tough bit in this pattern is to get to the F in the C shape, which is going to be a little bit of a tough shape here. You’re going to have 8-7-5-6-5, which is basically just your normal C major, you’re dragging it up your bar, it’s now on the 5th fret and you’re putting your C above it. After that, we have a little E7, and at the end at the end of the phrase, you’re swapping your index and your middle finger, so you can get what’s the flat 9s.

You’re adding in a little bit of an alteration to make it sound a little bit more Spanish-y as well. At the end of the phrase, you’ve got a D minor 7, which is the other kind of shape you can do a minor 7 in. Once again, you’re going to put in your A minor shape,and you’re going to drop off your little finger. It’s a cool way to add minor 7 chords into your playing as well.

Then it goes back to your E7. It loops around. It’s kind of got this off-beat Latin feel about it. Keep your strumming hand fairly consistent when you’re going through this, and you can add in little arpeggios and other bits too. Let’s have a look at that.

Example 2 introduces a technique in the style of Carlos Santana. I could’ve gone with loads of different things here today, because obviously he’s such a master of loads of things, but I went with tremolo picking.

In this example, I really like tremolo picking, because it’s a fun kind of new idea you can bring into your soloing techniques. Now simple put, you’re basically going to have a note on one you’re playing. In this example, we’re using A natural minor, A minor pentatonic type ideas, and you’re going to alternate pick the string really, really hard. Back and forth, back and forth on the same note. You’re just going to almost tickle the string like it’s a feather.

One thing you can do with this is make sure you’ve not got too much plectrum on the bottom, actually hanging out going underneath the string. A lot of my students have so many millimeters of plectrum, but you just want to have maybe 1 or 2 millimeters, and just tickle the string, and build your speed up with the metronome.

That’s the start of it. At the end of this, we’ve just up around the A minor pentatonic, adding in a couple of notes right up around the 17th fret, and we end with a nice big chunky vibrato bend just to make it more into a lick.

Try writing your scales out on 1 string, and alternate picking them with this tremolo pick as well. Let’s have a look at that one too.

The lick in the style of today, I’ve tried to get the real Latin rock feel of Santana into this. It’s all around A minor as you might expect. We’re up around the 4th position shape for the start of the lick using your A minor shape, A minor, and we’re up around the 12th frets here, and you’re introducing some sort of note of G sharp, which is your major 7th, which gives it kind of harmonic minor feel as well.

If you haven’t come across those scale shapes, I highly recommend you learn your harmonic minors scale too. Then we do a classic kind of bluesy lick, we  move into position 1 around your E minor shape, and we’ve got a little lick, which once again revolves around this little Spanish-y sounding note of the G sharp, which gives it the very flavor of Santana.

If you’ve not come across the harmonic minor scale before, don’t worry too much, but you can learn this lick, and you can blend this new sound into your playing, that kind of slightly more Spanish vibe.

I hope you’ve enjoyed these, let’s have a look at that one. If you’ve got any questions or comments, just write it below this video and I’ll get back to you. Take care, see you soon.

I’ll see you next time for more videos.

3 Secret Plectrum Techniques The Pros Use