In this lesson, we are checking out three guitar licks in the style of the incredible Brian May. His style is raw and passionate with huge-sounding power chords, technical scale runs, and specialist techniques aplenty in today’s examples.

Brian May’s rhythm work is usually big and bold. This example shows a ‘normal’ open A chord, up one octave and incorporates slash chords. Simply put a slash chord is a type of chord / a different bass note. D/A for example, uses the main notes of D major, but has A as its new root note and not D. This progression is then moved into the keys of E and D, before returning to A with an A major pentatonic lick to finish. 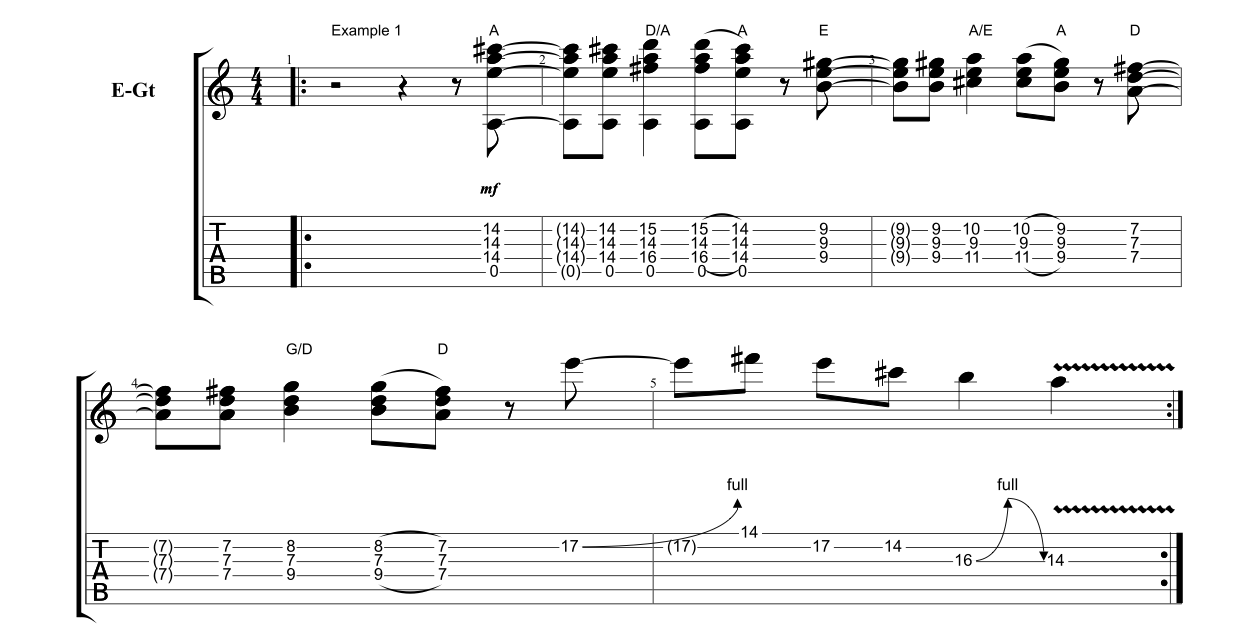 In this guitar lick, I wanted to demonstrate how to get maximum value from your scales. By sequencing your notes into a pattern, then adding the specialist techniques showed below you can get great excitement from even a simple scale run. Start of slowly with these hammer-ons and pull-offs. Then try applying the principle to other scale shapes you enjoy using.

We are putting  everything into this final guitar lick. Bends, hammer-ons, pull-offs and slides form the basis of creating speedier patterns in Brian May’s playing. The final part of the lick is what I really want you to concentrate on. Notice how the combination of a simple trill, and a slide, allows you to move effortlessly between your positions of the pentatonic scale. 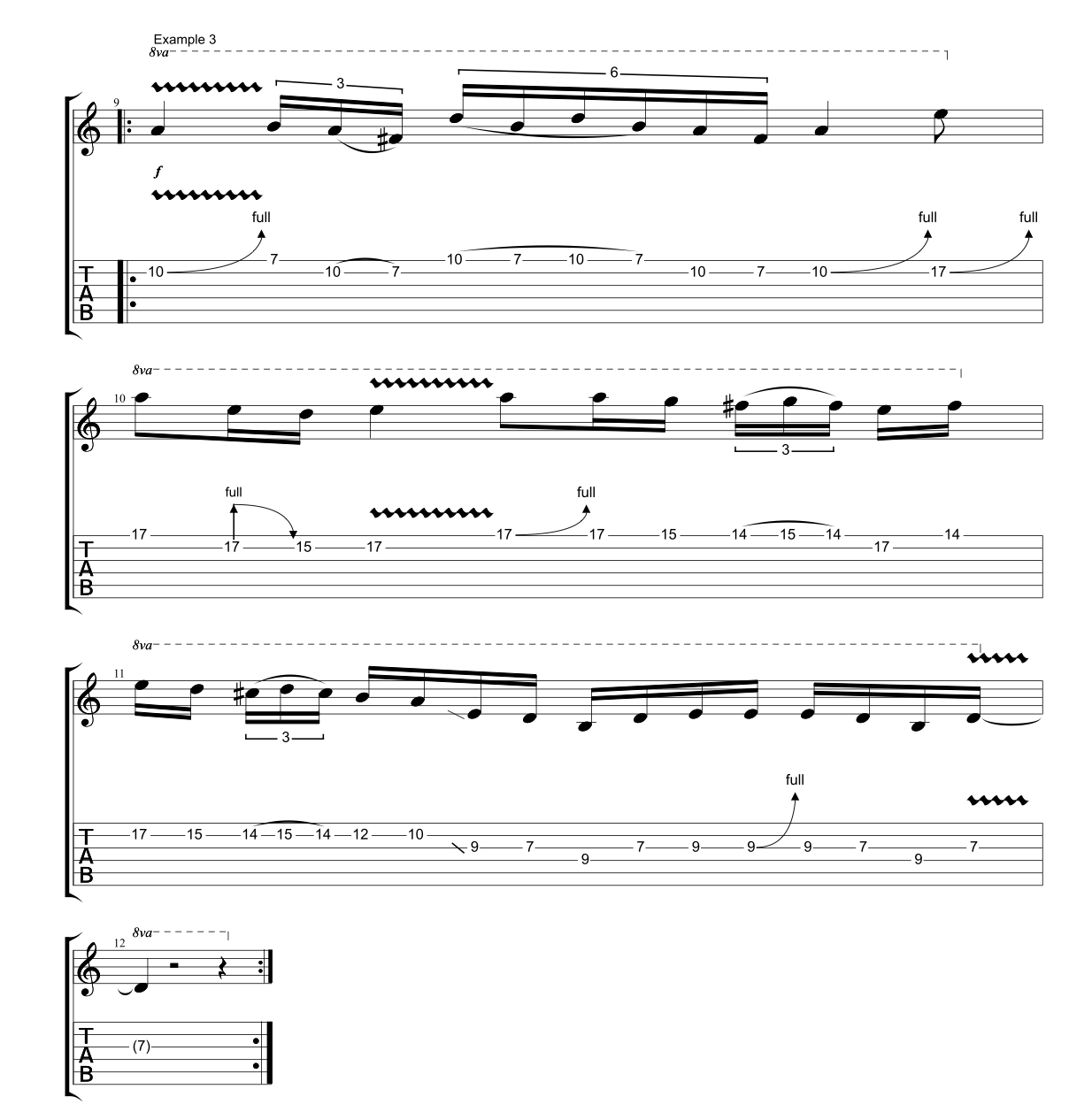 For classic Brian May style guitar licks, I recommend buying the album “Best Of Queen.” My favourite track on that album being “Don’t Stop Me Now.”

Hi guys, Simon here for Fundamental Changes. Today we’re looking at the magnificent style of Brian May from Queen. Let’s look at 3 of his examples just after this.

Example 1 today, as always, revolves around a chord. Once again, today it’s around a little chord progression. Brian May loves to do this little thing where he has a normal A chord that you could do with 3 different fingers. He does that with 1 finger, his index finger kind of bars across, and then he brings on 2 notes in the strings 4 and 2.

In this case, if it was down low it would be frets 4 and 3. This actually makes a D over A chord. If you’re getting really confused that, if you imagine your C shape that you would have open here, and you move that up 2 frets into your bar chord version of the C shape, and you take off your little finger, and you drop that one down as well.

You can see that there’s the part of the D with the A underneath it. It’s called a slash chord, not named after the player from Guns N’ Roses, because that’s a D over A. It’s called a slash chord. That’s a little tip there. We’re going to do this up an octave. We do this one here, the D over A, and then I’ve moved it around to different positions. He doesn’t do this a lot, but I wanted to make it a little fun example for you. We’re then going into A over E, and a G over D, and then we’ve got a little A major pentatonic lick to finish this one off. Let’s go and have a look at one,   style it slowly and build it up.

Example 2 revolves around a technique. Today I’m going to call the technique maximizing your scales. Now, Brian May does this extremely well, and what I’ve built here is a little run up, kind of like a D run up, and you’ll see when you’ve played through this, he runs a series of notes, then the 2nd note he started off runs from the neck same series of notes again, but adds in 1 more. In this case, a bend, kind of like a slight pinched harmonic too, so dig the underside of your thumb under the string to get that pinched harmonic. Then he runs it down with his signature trademark of hammer-ons and pull-offs, so you can also bring that out in this technique here.

Then I just resolved it to a root note of D at the 12th fret of the 4th string, the D string there. This is a little fun one. The technique, really, is try running wherever you’ve got a scale, a series of notes, start from the 2nd one and go up to the next note of the scale, then you can carry on from the 3rd, etc., and run backwards as well.

It’s quite a fun way of maximizing your scales. Let’s have a look at that in lick 2.

Lick 3 is your lick in the style of. I’ve tried to create something here that’s quite fun, quite jam packed full of techniques. Often, one of my most asked questions is how do I get speed on the guitar. Often, players like Satriani and things like that, they’re using big legato, they’re using tapping, whatever.

Guys like Brian May would get their speed by a combination of hammer-ons, pull-offs, and slides, so they’d be doing a hammer-on, pull-off in a specific scale, mainy pentatonic based, then they would slide back into a different position or up, to get the speed there as well.

Then we are on 1 string, we are hammering, pull-off, sliding all the way back into position 1. This is a really effective way to get between your shapes. If you just think about having those different techniques are a really fun way to get your playing sounding quick really, really speedily.

I hope you’ve enjoyed these, and I’ll see you next time.

Hi everyone, thanks for watching these 3 licks in the style of the fantastic Brian May. As I always say, go and check out Joseph’s website Fundamental Changes for tons of free lessons from loads of different distinguished tutors, and check out my YouTube channel, that’s just got over 200 subscribers, SDPguitar. Just go and have a look at that too.