After focussing on picking patterns for the first two articles of this series on metal rhythm guitar, I wanted to start to branch out and explore suitable scales and arpeggios. A strong picking hand is definitely the most important element for this style but without applying it to the right note choice, your playing won’t be convincing.

In this installment, we will be looking at a selection of scales that are commonly used in metal. Scales are unfortunately thought of as tiresome practice material that classical musicians run up and down for exams. However, ALL of tonal music is derived from them and their corresponding harmony, and the best way to think of them is as pools of notes with individual musical flavours which can be dipped into and mixed however you please.

When learning a new scale it is wise to understand how it is harmonised. This means what chords are found on each step of the scale. (If this is an unfamiliar concept then have a quick read of some theory to get up to speed) The scales in this article will be the Aeolian mode (aka natural minor), Phygian Dominant, and the diminished arpeggio/scale.

A lot of metal riffs make use of the semitone intervals in the scale, as these are usually on the darkest, most characterful notes in the scale, so It’s worth noting where they lie in the scale in relation to the tonic.

The Aeolian mode contains the same notes as it’s relative major scale. In A minor it would contain the following notes and the resultant 7th chords can be built on each step, the same as C major.

Example 1 shows the Aeolian scale in action. Note the majestic sombre quality to this scale. The character notes are the 2nd and the b6th (B and F), both of which are semitone away from their closest chord tone in Am.

Ex. 2 features the darker, more exotic sounding, Phrygian Dominant. It is the fifth mode of harmonic minor, but a better way to think about it is just be away of the character notes of b9, major 3, and b6. The wider minor third leap between b9 and 3 is what provides the exotic sound. Here is a harmonization:

The final example for this column is based around the diminished arpeggio, and the octatonic (eight note) scale from which is can be derived. The diminished chord is symmetrical, meaning it can be formed from any of its notes as the starting note. The scale also repeats every other note as it is just a repeating sequence of tone and semitone intervals. The following examples demonstrates this quality by moving the same ideas to different scale degrees.

Usually the diminished sound would be combined with other less tense tonalities but for the purpose of this lesson I have exclusively drawn from the octatonic scale for the whole example.

I used strict alternate picking, although a combination of legato and picking would work well too. Be sure to practice carefully to be even and precise. 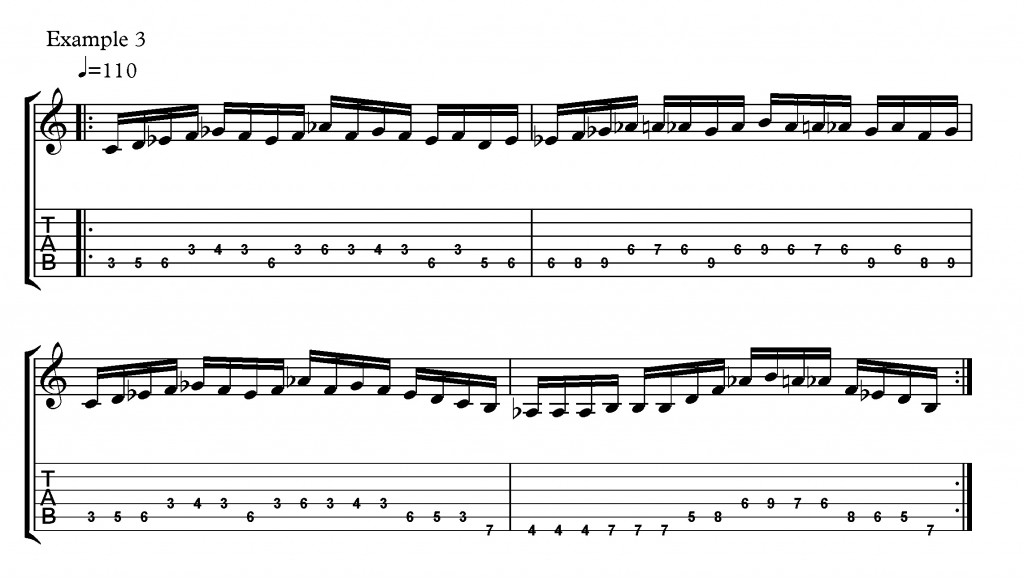 Try to apply your own patterns and rhythmic ideas to these and other scales, recording or notating any ideas that you like. The end judge should be your ear, the scales do not make the music! Also, try to see/hear these scales in riffs you may already know.

Recommended listening: Phrygian Dominant features heavily in neoclassical influenced players. Try Uli Jon Roth (Sails of Charon), and Yngwie Malmsteen (I Am a Viking), for the octatonic/diminished scale listen to the middle section of the title track from Dream Theater’s Octavarium, which exploits the symmetrical nature of the scale.