Look at the formula again, the Phrygian Dominant mode contains all the notes of a Domi-nant 7 arpeggio (1, 3, 5 and b7) plus some excellent extensions (b9, 11 and b13).

The scale can be played like this on the guitar: 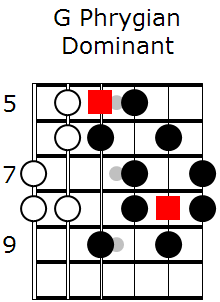 It is important to know this scale, but for our purposes we again want to create an eight-note bebop scale, which will keep the arpeggio notes on the beat, just as with the Mixolydi-an bebop scale in chapter six. We do this by adding a natural 7th between the b7 and the root. 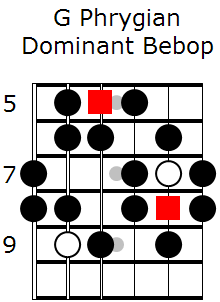 The b9, as you have heard, does sound great as a target note on the G7 chord, so one way to work with this is to target the b9, but then use a chromatic (bebop) note to place the root back on the beat. More on this later.

Begin by learning the changes between Bb7 and G7 over two-string groups. I’d advise using a Bb7 arpeggio on the Bb7 chord and moving to the Phrygian Dominant bebop scale over the G7 chord to begin with. You can also reverse this so you’re practicing moving from the Bb bebop scale to a G7b9 arpeggio.

Later move on to using bebop scales over both chords.

Here are some examples of melodic lines constructed on the top four strings to get you started. Work through these concepts in your own time and write down as many lines as you can. Keep a diary of what you’re practice and memorise any of your favourite ideas.

Remember to be methodical in your practice too, deliberately begin your lines from the root / b9, 3rd, 5th and b7th of each chord.

This lesson is a sample from my book, Jazz Blues Soloing for Guitar. For more information Click here

Using Guide Tones in the Blues (3rds and 7ths)