The Bebop Scale: An Introduction

The Bebop scale in jazz guitar

The bebop scale is an essential component of jazz guitar vocabulary. A common idea in jazz and especially bebop, is to ascend an arpeggio figure and descend a scale. When musicologists analysed solos by great players, they found that often similar scalic ideas were used to descend. They called it ‘The Bebop Scale’. Charlie Parker and Pat Martino really like this technique.

The bebop scale is an 8 note scale and is formed by adding a natural 7th to the Mixolydian Mode.

This table shows the intervals and notation of the A Mixolydian mode. 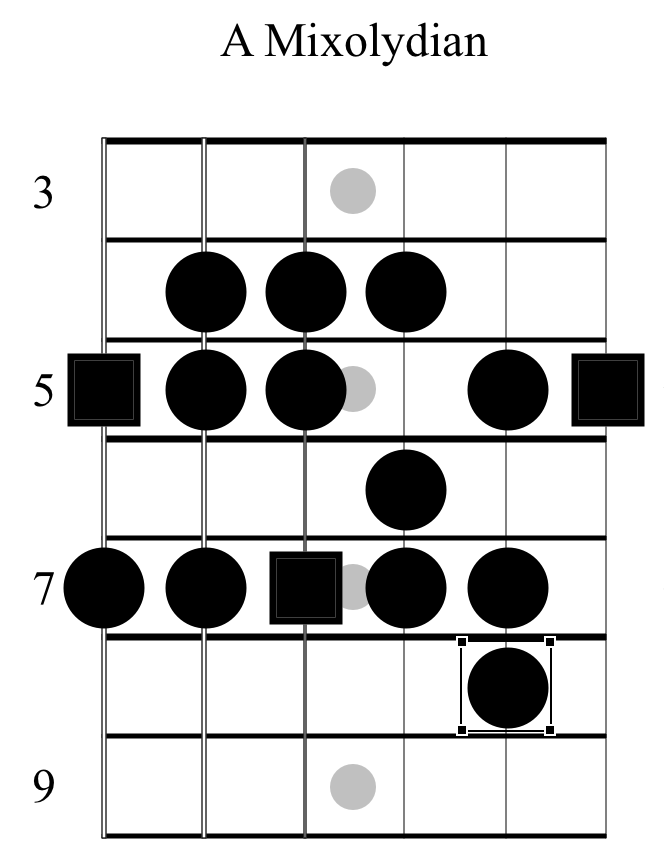 Whilst this scale sounds great over E minor 7 and A7, it sounds even better when played with the bebop natural 7th.

This table and diagram shows the intervals and notation of the A Mixolydian bebop scale in A: 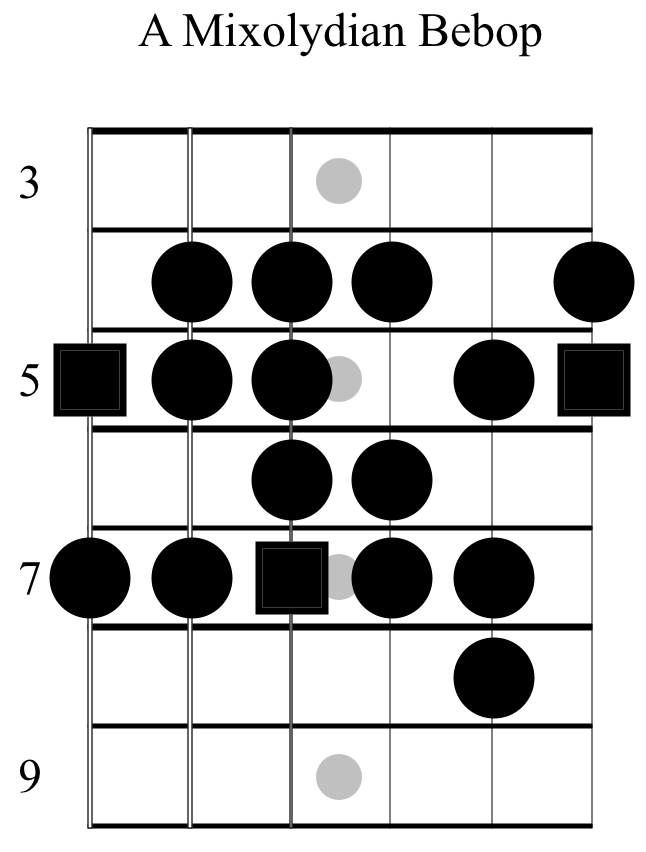 This scale works well for two reasons; it has all the chord tones of our E minor 7 Chord (E G B D) and the A7 chord (A C# E G). It also has 8 notes in the scale so considering that jazz music is most often played with 8th or 16th notes it fills the available space perfectly.

Once you are comfortable playing the bebop scale ascending and descending you should immediately bring the sound into your practice. For now we’re going to simply play over the ii V part of a ii V I progression.

Our only rule is to start from an arpeggio tone of each chord so, beginning logically, we will play the bebop scale from the root of E minor 7 and ascend 8 notes. The next note ascending the scale is the 5th note (E) of A7. Hit that note on beat 1 and then descend the scale as in figure 8c.

Do you notice that the bebop note (G#) falls on an off-beat? That’s exactly what we want otherwise the G# will clash with the G natural in the chords. This example also works well descending as shown in figure 8d.

Figure 8e shows this from the 3rd of the E minor ascending. Again, the G# is always on the

When we come to play the bebop scale from the 5th of E minor 7 we hit a small challenge in that the bebop note now falls on the beat. We don’t want this so figure 8f demonstrates one way to jiggle the notes to put the G# on the off-beat.

Finally, figure 8g illustrates ascending and descending ideas from the b7 of the E minor 7; jiggling the notes again so the G# is not on the beat and so we still hit an arpeggio tone of A7.

By now you should be getting the sound of this scale into your ears and starting to feel how to always put the G# on an off-beat. It’s time to start playing!

Here are some practice ideas.

Start from beats 2, 3 or 4 of the E minor 7th shown in figure and audio example 8h: See how this affects your placement of the G# and hitting appropriate chord-tones.

Start with a non-chord tone on an off-beat moving to a scale tone on the beat for a fairly authentic bebop sound as in figure 8i.

Only descend the bebop scale from different chord tones as in figure 8j. Try starting on different beats.

There are many other approaches you could take, for example, how about introducing interval skips?

For more ideas and a great introduction to jazz, check out Fundamental Changes in Jazz Guitar,