While clearly not the same thing, it is difficult to give useful independence exercises which don’t involve some degree of pick control.

It’s a tricky ‘chicken or egg’ situation, but we have to start somewhere. As many apparent ‘picking’ problems are caused by a hidden fretting hand weakness, we will start with finger independence in the fretting hand.

The most common problems I see regarding finger independence involve a lack of dexterity between the 2nd and 3rd fingers, and weakness in the 4th finger.

Lack of dexterity between the 2nd and 3rd fingers:

Each finger in your hand has its own tendon, except for the 2nd and 3rd fingers, which share one. Due to this human, physical idiosyncrasy, our 2nd and 3rd fingers do not like to work independently. Lay your fretting hand gently down on a desk and try to repeatedly switch between raising just the 3rd, and then just the 2nd finger. Compare that with lifting your 1st and 2nd finger…. You will see that a large part of building finger independence is learning to control these wayward fingers.

Weakness in the 4th finger:

Generally, the modern method of playing is to use the 3rd finger as much as possible, especially in those pentatonic bends. While I’m all for this, it can lead to a weakness in the 4th finger due to it not getting enough exercise. Strength and accuracy in the pinkie can often be the limiting factor in building speed and fluency.

This exercise was given to me by Shaun Baxter, an incredible player and educator who taught me while I studied at the Guitar Institute in London. Essentially, the idea is to target the weaknesses between any possible finger combinations on the fretboard. The key to building strength and control, at least for examples 1a and 1b, is to hold your first finger down throughout.

Hold down your 1st finger throughout and play the exercise, repeating it 4 times. This is tricky at first and will cause your hands to get fatigued quickly, so don’t play it for more than 30 second bursts.

At all times, these exercises are to be played one finger per fret. You should not use the same finger twice. Use your 1st finger on the 5th fret, 2nd on the 6th etc.

After 30 seconds of playing the exercise, take a break of 15 seconds and then study exercise 1b: 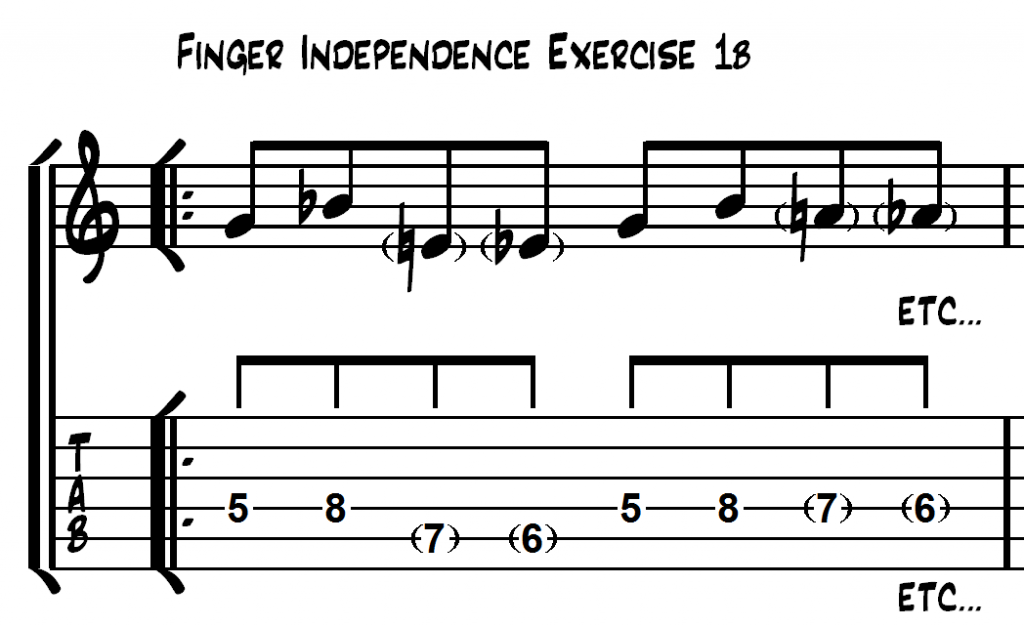 As you can see, this is the same idea, however the bracketed notes are reversed. Play through the whole idea as you did in example 1a. Keep playing for 30 seconds.

Next, swap the first two notes around: 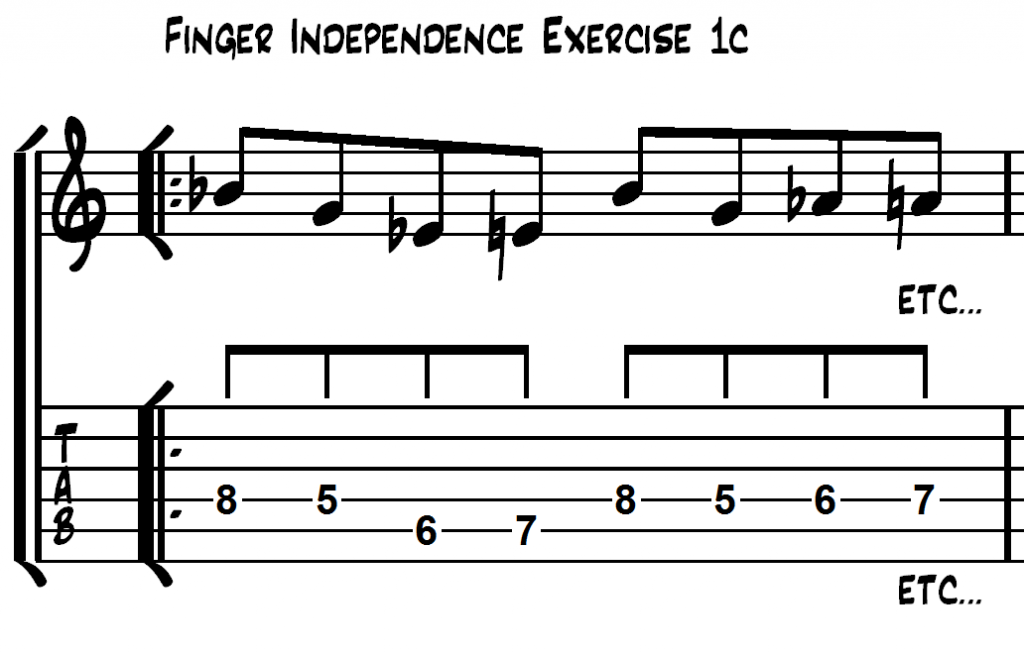 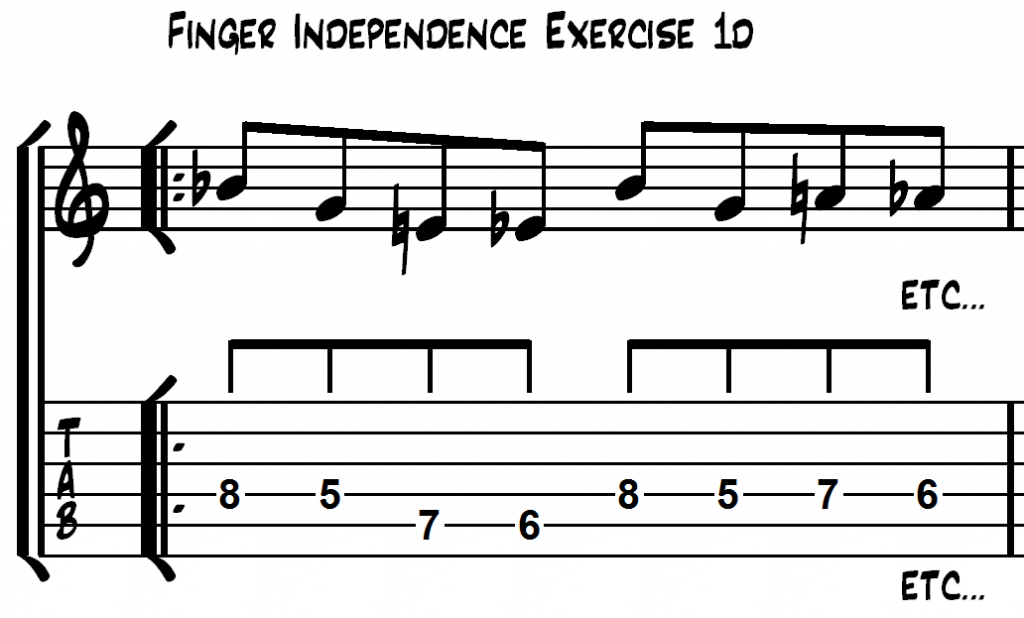 Practice the above four sequences slowly, set your metronome to 40 bpm and play 2 notes for each click. This exercise isn’t about speed, and practicing it quickly will make it less beneficial.

The next sequence of notes to practice is this:

It’s the same idea, but the repeated notes are now in the middle. Here are the other three permutations of the above: 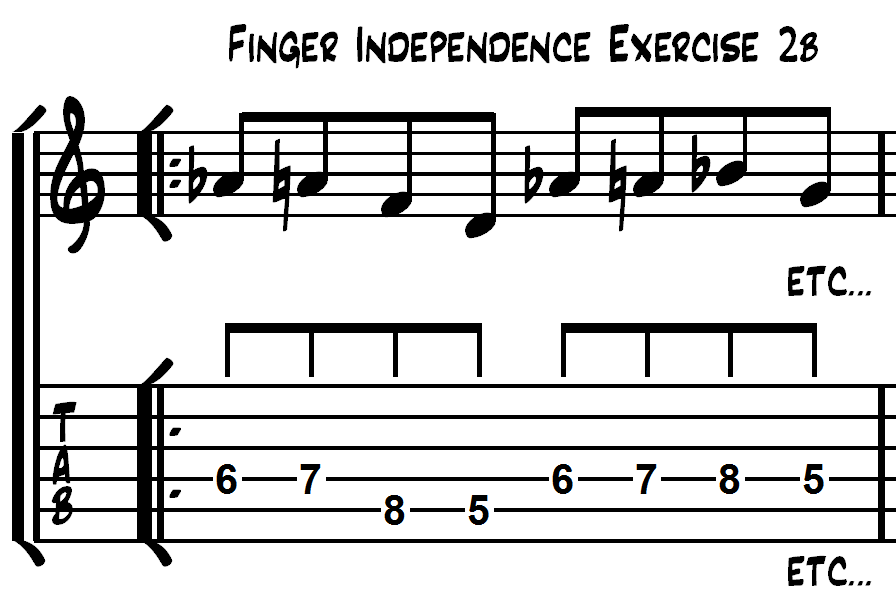 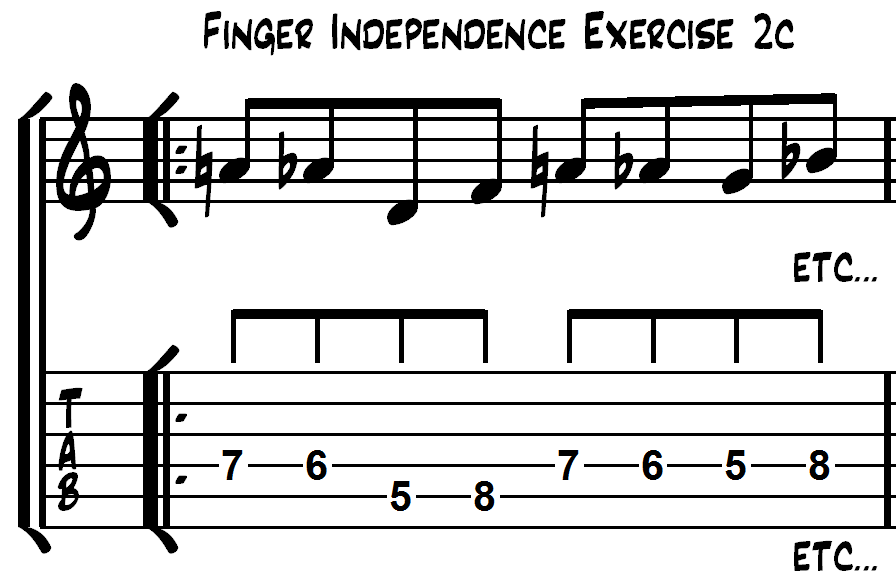 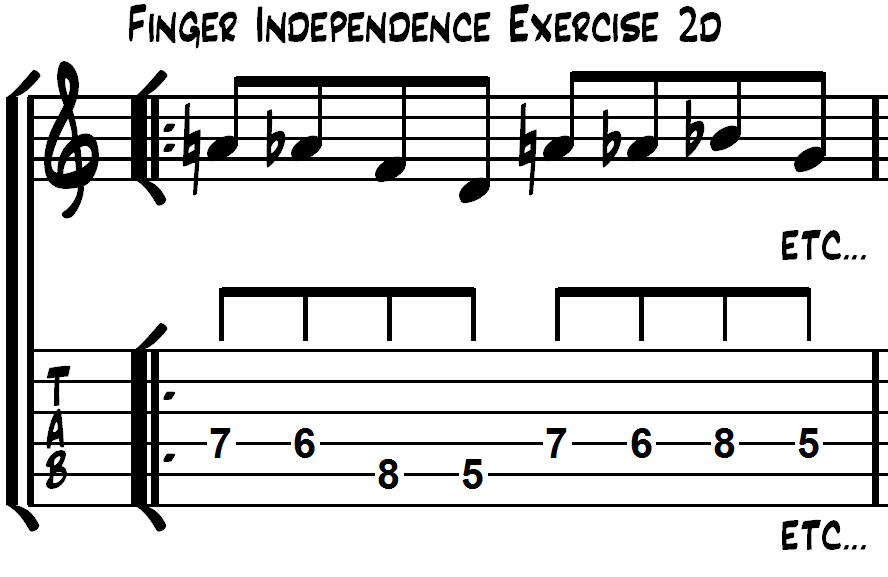 There are two other sets of possibilities to work on. Firstly: 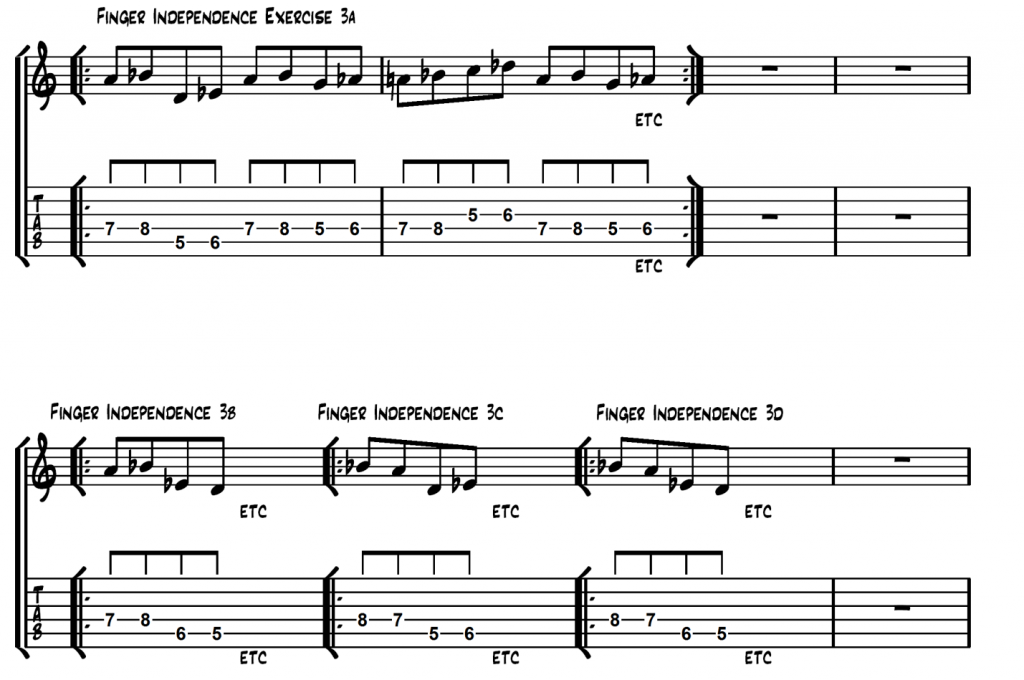 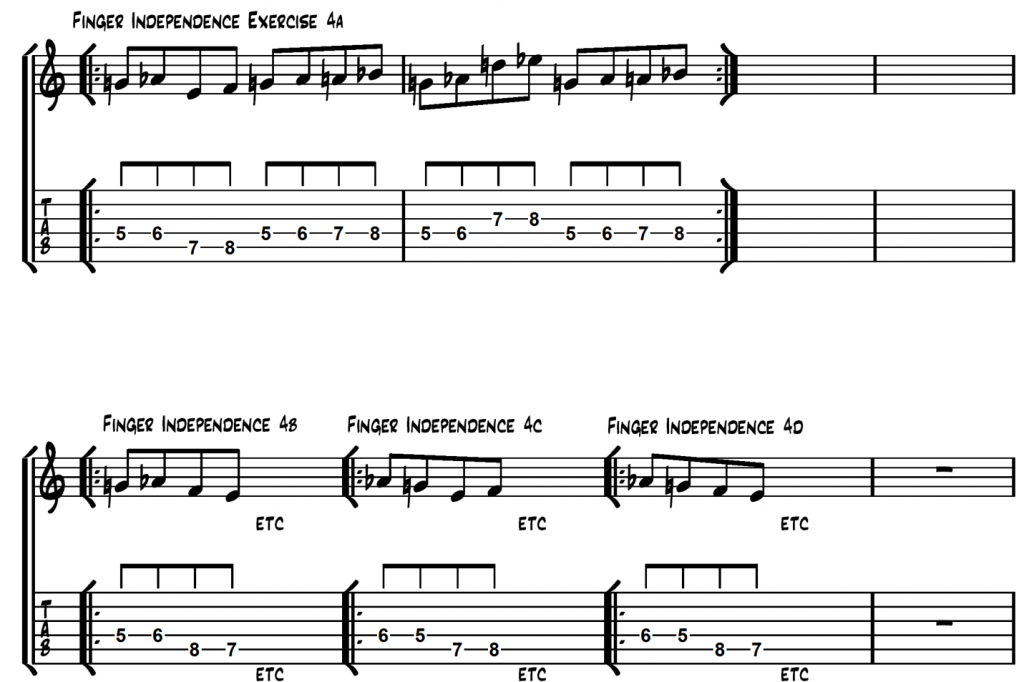 For all of the preceding exercises take the following approach:

Play for 30 seconds, take a 15 second break, and then move to the next example.

Aim to play every example in a practice session. Playing through all examples in this way should take no more than 10 minutes at the start of your practice routine.

If you find you can do an exercise comfortably, either play it slower or don’t bother practicing it. There is no point practicing something you can already play.

When you can pick every note in each exercise, try using hammer-ons and pull-offs.

Playing this in a controlled, slow legato manner is a great exercise for control.

If the exercises get too easy, try playing them with a slow swing feel, accenting every 2nd note as demonstrated below:

As with any kind of exercise, if you experience any type of pain, stop immediately.

The key to success is to control the fretting hand at a very slow tempo.

This lesson is an extract of my video series The Ultimate Video Guide to Picking Technique for Guitar available as an eBook on Amazon. 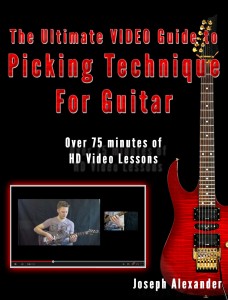 Triads over Bass Notes – An Explanation
Scroll to top