Triads over Bass Notes – An Explanation

Triads played over single bass notes (sometimes also termed ‘slash’ chords) have been a constituent part of popular music and jazz harmony for many years, but they still puzzle many players as to their application and actual function in harmonic terms. Hopefully this lesson will go someway in demystifying these chords and offer you a way to employ them in your own music, and perhaps also negotiate playing over them in improvisational terms too.

It should also be noted that triads over bass notes are not to be confused with playing two triads one over another, which is a completely different area of harmony and which I’ll maybe cover in a later lesson. This article focuses on the use of major triads played over different bass notes but you can in fact employ any triadic type in this fashion, creating a whole series of quite unique sounding voicings that can be used in place of more conventional chord forms.

For this lesson let’s examine a very common harmonic sequence in jazz music, the IIm7 – V7 – IM7 progression where we might begin with employing triads over bass notes. Illustrated below in the key of C Major (in chord symbols) is the approach that many players would employ for the chord progression using conventional harmonic thinking and chord forms.

In jazz circles, this simple progression is often diatonically extended or even chromatically ‘altered’ to create more colour and tension, especially between the V7 chord and the tonic major chord. See below.

This ‘enhanced’ version of the IIm7 – V7 – IM7 progression provides us with a great opportunity to use triads over bass notes and illustrated below is a resulting harmonization.

So why are we using these particular chords? The answer lies in the sound they imply over the original harmony and this is where many players become confused as to the use of triads over bass notes. To explain further, let’s examine in more detail what is happening here.

Traditional thinking with harmony often tells us that you have to have particular pitches contained within a chord structure to fully realize it’s sound and individual harmonic character, however that isn’t always the case and as we’ll see, these triads over bass notes often ‘suggest’ a chord sound rather than fully realize every possible pitch that the chord could contain.

In the last example above I’ve used an F major triad over a D bass note instead of the original Dm7 chord, which gives us the pitches: D F A and C. This actually spells out a Dm7 chord in full, as the combination of a Root, m3rd, 5th and b7th supplies all the required pitches to create a minor 7th chord.

The situation changes slightly however when we arrive at the dominant 7th chord (V7) within the progression, as here we are using an E major triad over a G bass note. The pitches produced are: G E Ab and B, which doesn’t immediately suggest a G7 chord as there is no b7 present (F).

What is actually happening here is that we are implying the sound of an ‘altered’ dominant 7th chord. If we assume that the chord is functioning as an altered dominant chord we can explain the use of the E major triad as giving us a 13th, b9 and 3rd, even though the expected b7 isn’t present. In short and simple terms, this voicing works because we are hearing it in a harmonic context, so the lack of the expected b7 isn’t an issue.

The final triad over bass note we are employing is over the tonic major 7th chord and here we used a G major triad over a C bass note. This gives us the following pitches: C G B D. In the context of a C major chord, we now have a Root, 5th, major 7th and 9th. You’ll also see that there is no 3rd present within this voicing but as with the previous chord, it isn’t a problem because we hear the voicing in context within the overall progression.

That about wraps things up then for this short lesson on triads over bass notes, but there is much more that can be achieved with them in many functional harmonic progressions. I’ve included a sheet here as well, which covers all the 12 major triad over bass note voicings and their most common applications. I hope you find it useful in your musical explorations. 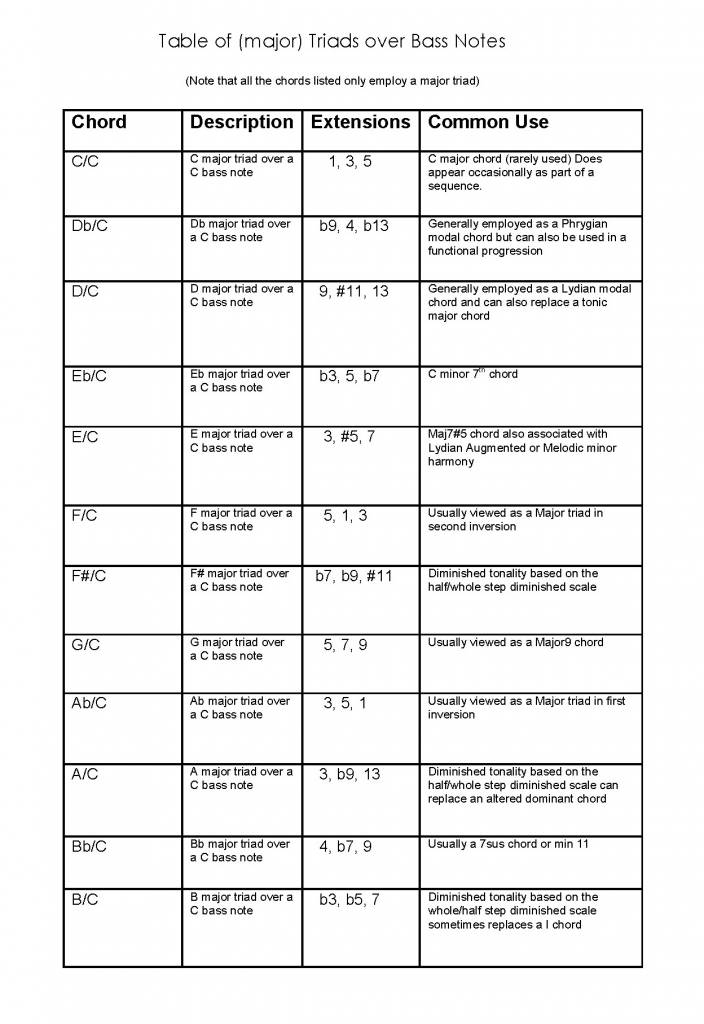 Pete Sklaroff is one of the top guitar educators in the UK… “The Teacher’s Teacher”. He is currently offering Skype lessons via www.petesklaroff.com which all include PDF’s and audio examples of the material covered within the lessons.