In this lesson, we are checking out three guitar licks in the style of the Sweedish neo-classic rock king, Yngwie Malmsteen. His style is fluid and impressive. Blistering alternate picking, eastern flavoured harmonic minor scales and a rock attitude, all add to this wonderful player.

Yngwie Malmsteen favours the harmonic minor scale as his basis for a lot of his compositions. This scale evokes an eastern sound, also when played like in example one can sound extremely classical. The term neo-classical, refers to classical progressions but played in a modern way, usually with copious distortion and attitude. Make sure you work slowly with the pattern and add strict alternate picking as well.

“If you’re worried or in doubt, always whip your arpeggio out.” This motto will set you up for your guitar-playing life. Arpeggios often frighten people, remember they are only the nights of a chord but broken into one note at a time. Malmsteen likes to apply mini arpeggios in his guitar licks. This example shows you how much speed you can build just using simple pull-offs. 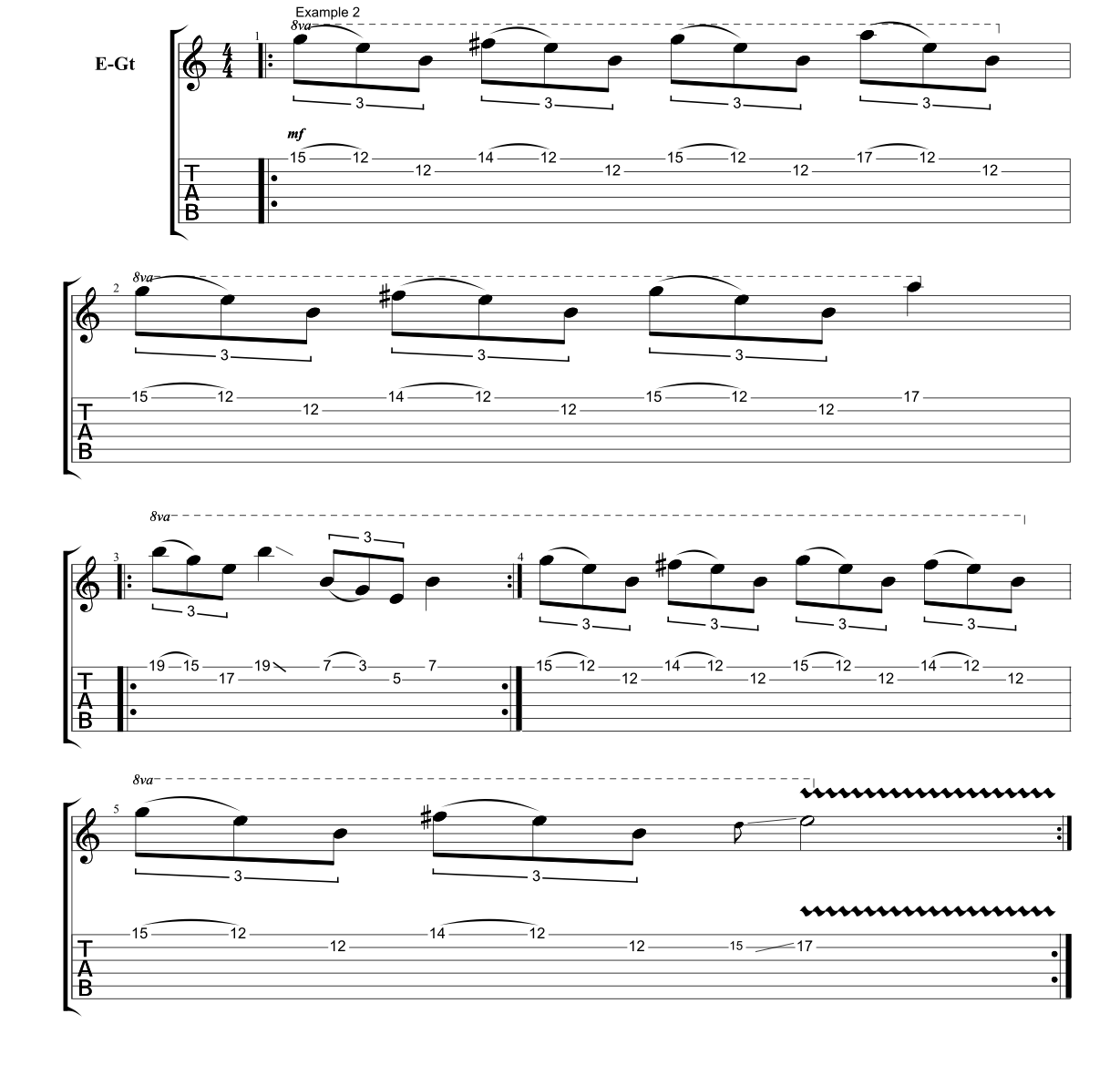 Once again, alternate picking forms the basis of this lick. You can apply some sweeping if you wish to. The D# diminished arpeggio that starts this lick, is very common is most modern metal styles. Another thing to keep your vibrato really wide. This alone will give you a heavier rock sound. 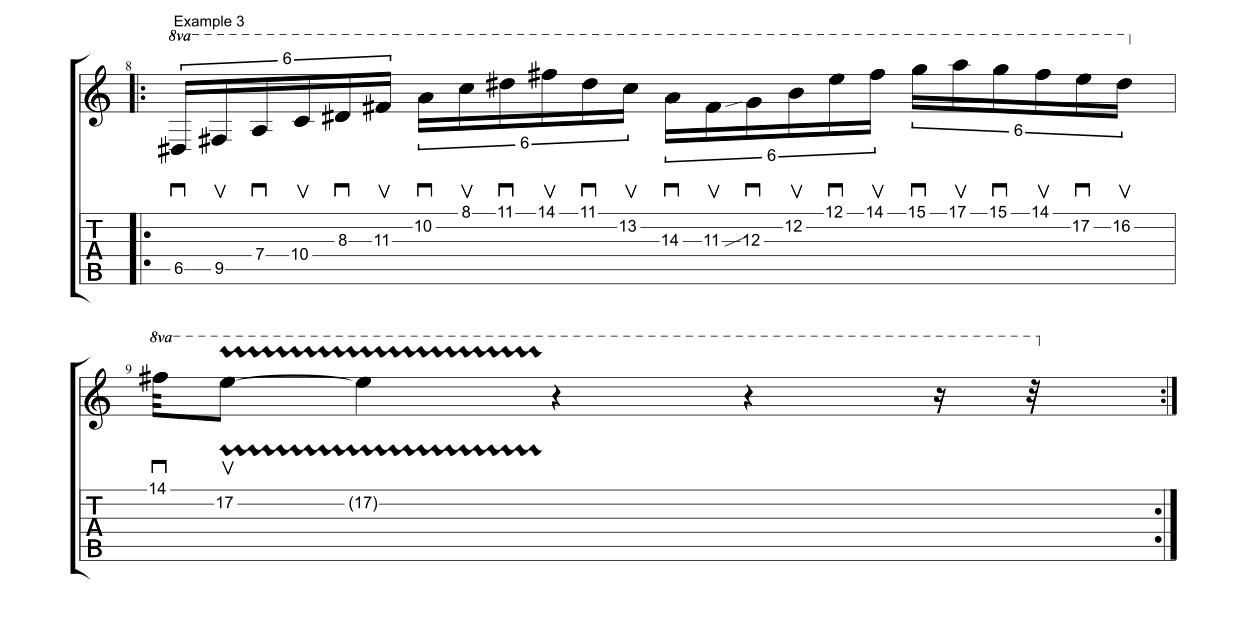 Example four is your E harmonic minor scale using three notes per string. Try applying different patterns similar to example one to get used to this awesome sounding scale.

For classic Yngwie Malmsteen style guitar licks, I recommend buying the album “Rising Force.” My favourite track on that album being “Far Beyond The Sun.”

Hi everyone, Simon here once again for Fundamental Changes. Today we’re looking at 3 techniques and styles in the style of Yngwie Malmsteen. Let’s get to that just after this.

Every week we look at a chord in the style of different players, this week we’re going to look at a scale. Now, the harmonic minor scale and Yngwie Malmsteen just go hand in hand. They’re just best friends, they just love each other so much.

You can see I’ve arranged those there, 3 notes per string. The example I’ve written here is just using that scale, getting used to it. It’s got a neoclassical feel, all that basically means is bark with distortion.

Let’s have a look at Example 1 quickly and slowly.

Example 2 introduces the mini arpeggio. As I’ve said in the past, if you’re worries or in doubt, always whip your arpeggio out, and Malmsteen is a master of that too. We’re up around again, E minor here. We’ve got a mini bar top 2 strings 12th fret,  and you’re going to be putting off 15-14-15-17 to the 12, and then rolling through there.

Then we’ve got a little E minor arpeggio up the top here, we’ve got 19-15-17, then we drag that down with the slide, do exactly the same thing down an octave, 7-3-5, then back up, and then on the end we’re using the same as the star and a little slide vibrato from 15 to 17, with some vibon the end of it.

You can, of course, bend the 15th fret on the end if you wish. This just shows you how you can have one little arpeggio shape, and fly about the neck like a nutter. He does this really, really well, and see if you can guess what song this idea comes from. Put that in the comments section.

Example 3, final example here today, I’ve done a longer picking lick. You can sweep pick the middle part of this one, but I’m going to do a future Malmsteen video where we can talk a little bit more about sweeping.

This is more about working on your alternate picking. For me, one of the most important techniques to develop: so down-up-down-up-down-up throughout this. It starts off in a D sharp diminished arpeggio through the strings, and then you get a little movable shape that Malmsteen likes to use, which as I said, you can sweep if you want to.

You can push through the strings, and then you got a little E minor harmonic minor lick up around – higher up the fret as well. This one sounds quite effective, you can move in lots and lots of different keys, and it gives you the flavor of Malmsteen.

Today in a 5-minute video, I can’t fit in all of his techniques. I’ll try to do a future video on it too, but I really want you to concentrate on alternate picking, hammer-ons and pull-offs, and the harmonic minor scale.

I hope you’ve got something from these videos. I’ll see you next time.

Hi everyone, thanks for watching these licks in the style of Malmsteen. I hope you’ve got something from it. As I always say every time, go and check out Joseph’s website Fundamental Changes, and also check out my channel, SDPguitar, where I bring you more bite-sized guitar videos and tabs, go and have a look at that.