How to Master Sweep Picking for Guitar Pt 1

Welcome to this new column! Over several lessons we’ll be breaking down the technique of sweep picking.

Sweep picking is the use of a single continuous pick stroke across several strings to articulate a series of notes arranged one note per string. It is an essential technique for playing wider intervals and arpeggios. The stroke is similar to the classical ‘rest stroke’ and when practicing at first it could be useful to let the pick rest on each adjacent string as you let it fall across them. Once this ‘controlled strum’ is under control then the fretting hand just needs to synchronize each note as the pick moves across the strings.

This technique will benefit from very slow practice to really get the two hands working together so be prepared to give it time to sink in and before long you’ll soon be able to speed these ideas up with control and accuracy.

In this first part we’ll begin with some great primer licks ranging from rock n roll, gypsy jazz and heavy metal to get the feel for this approach before moving on to arpeggios, licks and finally putting it all together in a rock solo study.

The first idea comes from classic rock n roll, and can be found in Buddy Holly. Use a downward pick stroke, pushing through the three strings and an upstroke for the fourth note.

Django Reinhardt was one of the first real guitar heroes. He made the guitar one of the lead voices in an ensemble rather than just being part of the rhythm section and had a whole vocabulary of idiosyncratic licks.

This example makes use of the symmetrical nature of diminished seventh chords and moves the same shape up in minor thirds along the length of the fretboard. Like example 1, use one continuous downstroke followed by an upstroke. Be careful to keep the position shifts accurate and in time. 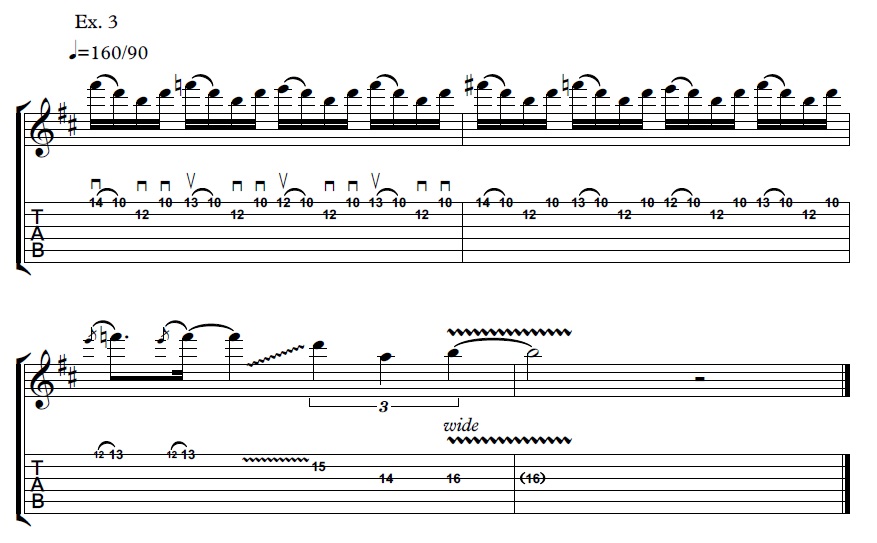 The final example for this introduction is a modern rock lick. Building on the first two downward sweep based licks, we now include some legato on the E string to create a repeating pattern using the B minor blues scale. Although this lick only sweeps across two strings it takes great control and relaxation to get it up to speed. You may be used to playing similar ideas with standard alternate picking but this method will give a much smoother sound and ultimately yield much faster speeds.

Next lesson we will incorporate upstroke sweeps and start to explore how to apply this technique to sequences of arpeggios. In the meantime be sure to stay relaxed and use the minimum of movement when sweep picking to get the most out of yourself. Focus on timing and clarity of sound. The more critical you are in the early stages will make everything that follows that much more digestible and rewarding.