Welcome to part four of our exploration in to the possibilities for harmonics on the guitar. In part one and two we looked at several different natural harmonics using the open strings, and then applying that to fretted notes with the use artificial harmonics in part three. This week we will look at a different type altogether, known as pinched harmonics.

Pinched harmonics sound much more aggressive than any of the other harmonics and unlike natural harmonics are generated entirely by the picking hand. This leaves the fretting free to apply vibrato and bending to the note. Combined with a good rock vibrato, pinched harmonics are a great way to accentuate notes in rock solos.

The technique itself can be tricky to grasp initially so be prepared to do some trial and error before it clicks. When picking the string with a down stroke you should aim to push the pick ‘through the string’ so that the outside edge of your thumb moves across the string immediately after the pick to catch the harmonic. As soon as the thumb has made contact with the string take the hand away or it will deaden the string completely.

The area of the string over which you pick will influence the resulting harmonic that is heard. Higher harmonics will be found towards the bridge pickup and lower ones over the neck pickup. I would suggest starting to experiment over the middle pickup (or if you have just two pickups, approximately half way between the two)

Here is a photo of my hand position for pinched harmonics. Not how flat the thumb is against the string. 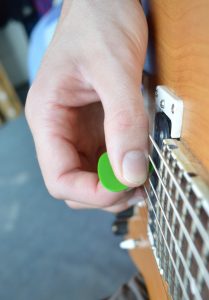 Country and blues players have also been known to use them, but you will find that they are most successful when you’re using a high gain amp or plenty of distortion. In this lesson we will be focussing on their application in the rock and metal context.

To start with we have a rock riff featuring palm muting and power chords. Pinched harmonics are frequently used in heavy riffs like this as they provide a great contrast to the chunky low notes. To get the maximum effect, dig in hard on the pinched harmonic and apply a strong vibrato.

Now for a typical bluesy rock lick. The minor pentatonic scale shape should be pretty familiar ground, so you can focus on nailing the pinched harmonics. Make sure to really get the vibrato wide and controlled to help the harmonics to sing out properly.

Finally we have a pull off idea on the B string. Play a pinch harmonic with a downstroke for every fretted note, then pull off to the open string. To start with, concentrate to just getting strong harmonics, then experiment with picking along the pickup area from bridge to neck as the fretted notes descend too.

Recommended listening: Pinch harmonics are essential for all rock and metal guitar playing, but Billy Gibbons (ZZ Top) and Zakk Wylde (Ozzy, Black Label Society) are particularly well known for their squealing pinch harmonics. As far their use in rhythm guitar playing in concerned, look no further than Machinehead and Killswitch Engage for heavy riffs laced with screaming pinched harmonics.