By Rob Thorpe Last month we delved into the rich palette that natural harmonics can bring you as a guitarist (part 1). After looking at the most obvious natural harmonics, I will demonstrate some more advanced and less well used ideas with natural harmonics, before moving onto artificial harmonics next week. The first thing to notice is that the resultant pitch of harmonics actually gets higher towards the nut – the opposite to regular fretted notes!

Secondly, the notes get closer together as you approach the nut, both in pitch and fret space, and the location of the harmonics start to appear between the frets instead of directly over the fret wire. The first two examples involve using the less common natural harmonics available on the neck in addition to those at the 12th, 7th and 5th frets. Note that it gets increasingly difficult to bring out these out, but to help try the following ideas.

Pick the string much closer to the bridge than ordinary, this helps accentuate the treble frequencies in the string’s vibration, and also adding distortion will help, although this means you have to be careful in letting strings ring out into each other, making it impossible to play clean chords with harmonics, so try the picking tip first! As an electric guitarist I may employ these extra natural harmonics to make more melodic accompaniment patterns in quieter moments compared to the limited possibilities of the more common natural harmonics, or perhaps within a textural layering of different parts. Before we dive in to the examples, I’ve provided a fretboard diagram showing the actual pitches of the usable harmonics on the guitar neck.

I’ve started by simply highlighting the new natural harmonics available to us and their position on the fretboard. Note the harmonics lie between the frets at the approximate places. It takes trial and error to get them exactly so use your ear and try to remember where they lie.

This demonstrates the potential for melodic ideas. First I play the B Aeolian scale entirely in natural harmonics. I invite you to experiment with playing melodic fragments from these interesting scale shapes. Because of the string crossing it is very easy to get adjacent notes to ring into each other if you are a fan of that slightly jarring sound within a chord. 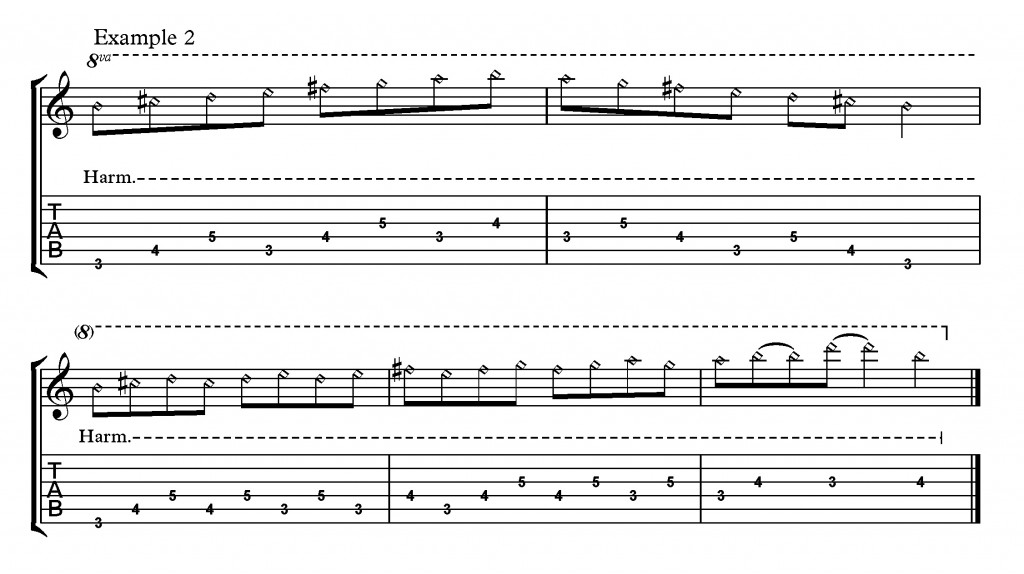 No study of natural harmonics would be complete without a quick look at some more crazy sound effects. The first of these tricks will need a guitar with a whammy bar, and for the second a guitar without a locking top nut (telecasters work best) Therefore, my Strat type guitar covered both bases nicely for the audio clip. To perform the whammy bar harmonic, first energize the string by pulling off to the open string, this is just like picking with the fret hand, the D at the seventh fret is not important, then depress the bar so the string goes slacker, and as you return the bar to the neutral position dab the desired harmonic node with a fret hand finger and the harmonic should ring out nicely. It takes a little while to get the hang of it consistently. The second half of the example involves plucking the harmonic and then squeezing the portion of the string behind the nut. Like using the whammy bar this method alters the tension of the string without interrupting the vibrating length of string.

Next time we will move on from natural harmonics and look at artificial harmonics. Recommended listening: Extreme natural harmonics are more the domain of electric guitarists rather than acoustic players. Joe Satriani, and Steve Vai were pioneers of the harmonic screams and bends which the floating bridge made possible in the 80’s. While they can be easily overused, in Joe’s expert hands they are a wildly expressive device. For me, Matthias Eklundh is the most precise and articulate harmonic user. (Freak Guitar), Eric Johnson is also worth checking out too for his very precise harmonic use.