Jens Larsen is a guitarist composer based in the Netherlands but has toured and recorded in Europe, North America and Africa. With his band Træben he has released three albums all recieved well by audience and press alike. He also won honourable mention at the International Songwriting Contest for his composition “Top Dog” of the 2nd album Push. Top Dog was also performed on Dutch National TV in 2012 in the concert program “Vrije Geluiden”

In the past Jens has performed several times at the prestigious North Sea Jazz Festival, among others also with Slide Hampton and Jim McNeely. In 2003 he performed with Michael Brecker in the Hague, a concert that was later released on DVD. He has appeared on numerous albums the last 10 years and has been working both as composer/arranger and guitarist.

In 2013 Træben was on tour in Canada, besides playing in Scandinavia and Benelux. 2014 will see the 3rd album from Træben, a concerts in Berlin and at Copenhagen Jazz. In Februray a short tour in Spain with colleague Marcos Pin resulted in an album that will be released in late 2014.

To find out more about visit his website: http://www.jenslarsen.nl

or his YouTube Channel with jazz guitar lessons: http://bit.ly/JensLJazz 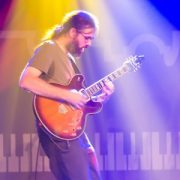