Prince! The man, the artist, the legend.

In today’s lesson, I wanted to look at some of Prince’s most iconic guitar riffs. From funk to rock, psychedelia to jazz, Prince owned both stage and studio performances. Let’s celebrate a real musical genius by letting his music live on.

As far as introductions go, few are more recognisable than Kiss. Fret the E7sus2 chord and strum it using 1/16th notes. Make sure you use the down, up strumming pattern shown in the transcription.

The chorus in the song Kiss uses the same chord learnt in the previous example but frets it in two different keys (‘E’ and ‘D’). This example is a useful workout for 1/16th note strumming consistency. Make sure you watch the attached YouTube video for a slowed down version of every example featured in this article.

Triads or three note chords were an essential tool in Princes rhythm guitar playing. In the track 1999, he uses an F triad and a Gm triad with a syncopated rhythm to create the main hook of the whole song.

Diamonds and Pearls features a lovely single-note funk guitar pattern. Although a simple idea, Prince was a master at orchestrating all the instruments in a track to complement each other, mainly because he played over twenty himself.

The introduction guitar part in Alphabet St features four-note chords and a single note blues scale riff. The strumming pattern is constant throughout, and once again keep a strict down, up, pattern throughout. The final single note run uses the G Blues Scale (G Bb C Db D Eb). Follow along with the slowed down version of the YouTube video and speed it up gradually with a metronome. 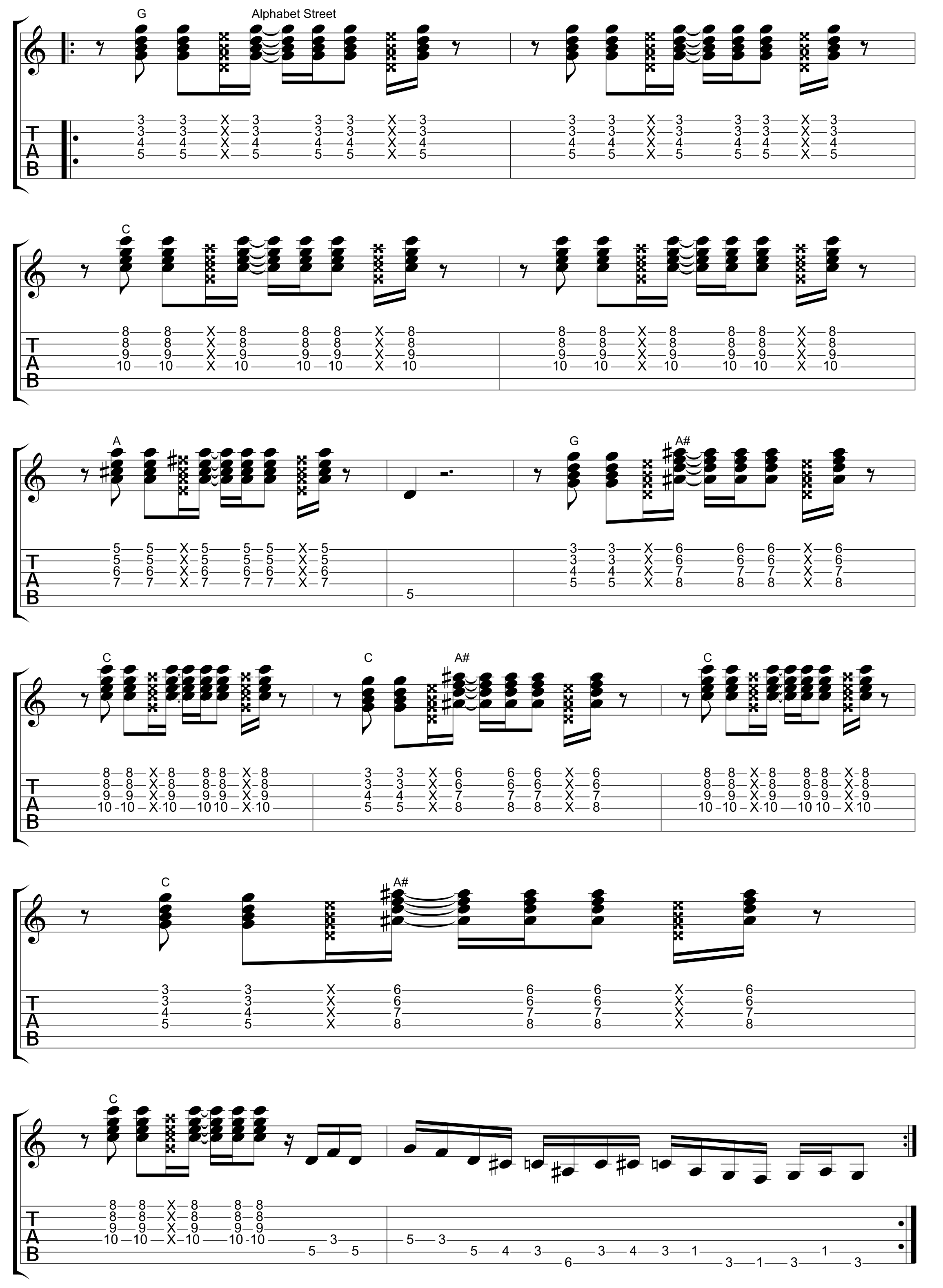 For a great overview of Prince’s work I recommend buying the album “Ultimate Prince“. If you fancy further listening, my favourite Prince album is Sign O’ the Times.

Hey, Youtube. Simon here once again for Fundamental Changes. Today I’m going to show you a few funky Prince riffs, in honor of a great man. Let’s go and have a look at a couple of those, just after this.

The introduction uses a really nice 9th shape up the neck: nothing, nothing, 12, 11, 12,12. You want to keep your strumming hand consistent with the 16th notes here: 1 e & a, 2 e & a, 3 e & a, 4 e & a. You can imagine that your strumming hand is going in a pendulum and you’re muting whatever else needs to go on will happen with your fretting hand. So intro: down, up, down, up, down, up, down. Quite simple, very, very catchy, very, very well known. Everybody knows that little theme, nothing too complicated there.

The chorus uses that shape, and then the same shape back 2 frets in the 10th fret, and just strums constant 16th notes on both of those, for a couple of bars on E. Very, very straightforward there, again keeping your strumming hand consistent:1 e & a, 2 e & a, 3 e & a, 4 e & a on each of those chord shapes. The slightly more tricky part of the Kiss song is the breakdown or the middle 8, where we’ve got these cool mini little 3 note triad shapes up the neck here. You’ve got 12, 13 and 15 on the G, B and E, and then 12, 13 and 14. This gives a very classic Prince funk tonality. This was one of the first funk riffs I ever really learnt, so I wanted to make sure I included it for you guys here today. Again, this time you’re going to be keeping your strumming hand extremely consistent as always, but this you’re adding in mutes between the different parts there so you’re getting a tuck-a tuck-atuck-a, quite anaggressive, funky strummed pattern there as well. What you need to do is follow along with the slowed down version – what you just saw before then – and have a look at the tab on the article underneath there for all the specifics. Keep it strummed, keep it going, and get used to moving your little finger or your baby finger and your middle finger or your third finger on that top strings to give that funky tonality. Let’s have a look at the next riff.

It always amazes me what Prince was able to do with 2 chords. In this example 1999, the main hook or theme uses an F and a G minor triad shapes on the top 2 strings. Your F will be the D shape, 5, 6, 5, top 3, and your G minor will be D minor shape, 7, 8, 6, on the top 2 strings. If you’re not sure of how those are formed, if you imagine your open D, we’re moving that up a fret each time you could have an invisible root note on, but we don’t need the root note for this. D, D sharp or E flat, E, F, because there’s no notes between E and F. Same thing with this G minor here, D minor, D sharp or E flat minor, E minor, F minor, F sharp or G flat minor, G minor. Just move in these shapes. If you’re not too aware of these triads, I highly recommend you just having some fun moving these two shapes, a major shape and a minor around the neck. This comes obviously from an F and a G minor pattern, and it’s very syncopated. Da-da-da-dap, da-da-da-da-da-darap, that’s the rhythm nature of it, gives it its hook and it’s feel, and the thing that we cotton on to as listeners as well. Those are your 2 triad shapes there for 1999.

One of the other things that I loved that Prince does is the amount of space he creates for all the instruments that he uses. A lot of the reasons I believe that that is because he played over 20 of them himself. I mean that, for a start, is just mind boggling to me, how anyone can 20 instruments to that level. The main single note funk riff in Diamonds and Pearls is around a G theme. It’s very sparse, but when you hear it come in to the track – I think it’s around 1 minute 20 in Diamonds and Pearls- it just adds this funky flavor, and I love that kind of thing. It reminds me of Paul Jackson Jr. funk lines in there, where basically he has a big arrangement going on, and he is able to pop something in the middle of that arrangement. This is also great if you’re playing in a 2-guitar band and you’re the second guitarist. The first guitarist is just playing big chunks of your bar codes, and you can just fill in the gaps with single note, or double stop funky lines – it’s one of my favorite tips. This line here repeatsitself around a G theme, and it uses a double stop 10, 10, 12,12,10,10 on the top 2 strings. Nothing too complicated, but just getting you used to how you can create and arrange different funk guitar parts in your own arrangements too. Let’s have a look at the final riff today.

That’s the final one today. I picked a couple of riffs here that maybe you don’t know so well. This is a really, really fun one to play and practice, it’s called Alphabet Street, the song. It uses an E shape major chord on the top 4 strings in different positions. It starts off in G, and then up to C, and then it’s got one in A, and the next bit is G, B flat, C, using the same shape. You can think about it as your E shaped bar chord moving around, but just the top 4 strings. You can fret the whole chord, but if you do end up strumming the whole chord then it sounds a bit bass heavy. That’s a little tip there; I tend to fret at the top 4 strings. If you’re struggling with your muting stuff, you can always apply a fret wrap around the strings as well there. Grove Geardo a brilliant one of those. At the end of this Alphabet Street introduction riff, we’ve got a reallycool G blue scale, single note, picking run. Once again, I recommend you just watch my slowed down version. I alternate pick this down, up, down, up, down, up, down, up, refer to the tab in article below, and it’s a really, really fun one to put together with all these little chords here, showing you that you can blend chords and single note playing in your rhythm playing.

I hope you got something from these 4 little Prince riffs today;it’smy little tribute to a huge influence on my life. I went to pick songs maybe you didn’t know quite so well, so try out some triads, like the 1999 and the Kiss, try out some new shapes, keep your strumming hand consistent and syncopated, write your own riffs in this style, and let’s keep the great man’s music living on in the practice room. Take care, see you next time.

Hi everyone, I hope you’ve got something from this Funky Prince Riffs, make sure you subscribe below because we bring you videos to inspire you wherever you are in your guitar playing journey. Check out Joseph’s and my books on Amazon and on fundamental-changes.com. See you next time.