The Hindu Pentatonic scale has a slightly Eastern flavour, and Eric Johnson and Jeff Beck are big fans of this sound.

In blues guitar, the Minor Pentatonic scale is often used over both minor and dominant 7th-type chords. The clash between the minor and major tonalities produces some of the soul of the blues. The Hindu Pentatonic is another choice you can use when playing over dominant 7th chords.

The licks in this chapter work well over dominant 7 chords, and fit beautifully over a traditional ‘dominant 7’ 12-bar blues.

All of the following Hindu Pentatonic scales are organised around dominant 7 CAGED chords. As always, make sure you learn the chord and scale shape first before attempting the licks.

Example 5a uses a series of hammer-ons and pull-offs that are combined with bends and vibrato. In bar two, the stretch to the 9th fret may prove tricky at first, but training your fourth finger to stretch multiple frets comfortably is a vital skill. If you find this stretch tricky, try lowering the position of your wrist.

This lick is written over an A7 chord, but you should also learn it in the keys of ‘D’ and ‘E’ by moving the line up to the 10th or 12th fret. Over a blues in A, try playing the lick over each chord in turn so that by using just this one lick, you can navigate through the whole progression. 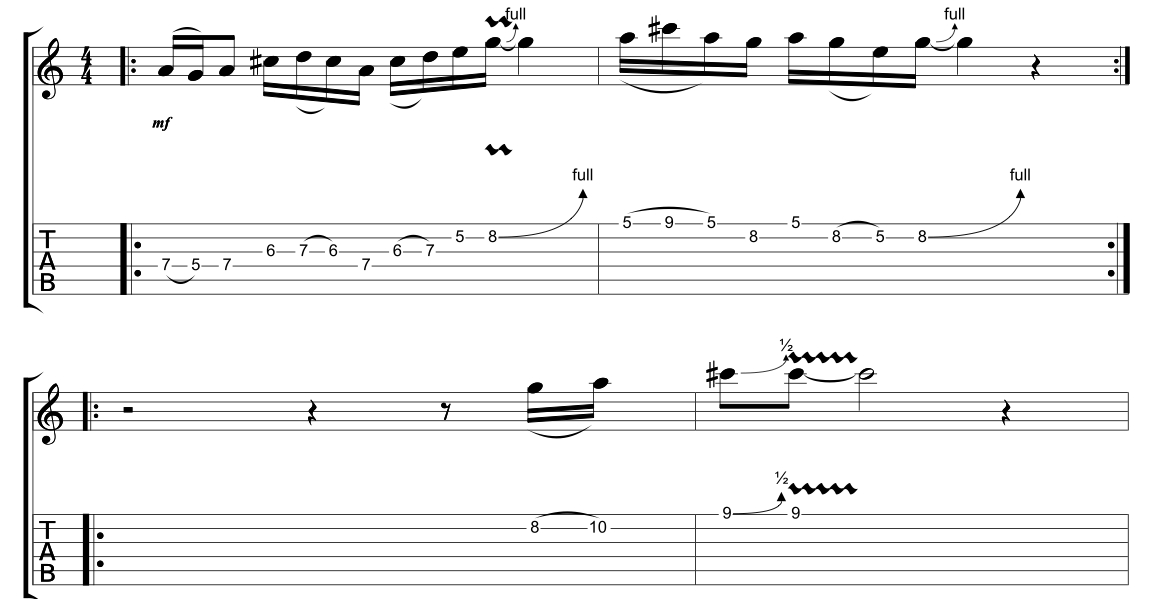 Example 5b is a blues lick with Eastern influences that written in the style of Jeff Beck. Although Jeff Beck is revered for his blues playing, he also blends fusion sounds into his songs. Listen to the Led Boots from the 1976 album Wired to hear some modern sounding ‘Hindu’ Pentatonic licks and phrasing.

A Hindu Pentatonic – Position 4 ‘A’ Shape

Each scale position creates different nuances in your playing, so certain bending or legato ideas may be better suited to some positions. Example 5d is a fun line that is particularly suited to shape 4 of the ‘Hindu’ Pentatonic scale.

It can be fun to add dissonance to your melodies. Playing two notes that clash slightly is great in moderation!

For more Hindu Pentatonic inspired licks I recommend buying the album Wired by Jeff Beck. My favourite track on that album being “Led Boots.”

There are only 3 different types of chords in essence: major, minor and dominant. Yes, there are other variations, too, but they’re the 3 core families. We’re going to head on in into the Hindu pentatonic, and for anyone will find by the name, it’s simply just your A minor or your minor pentatonic, but you’ve raised the minor 3rd up to a major 3rd all the way throughout. What you’ll figure with this is it’s actually incredibly similar to your minor pentatonic. You’re just going to get maximum value in your licks by adapting 1 new note. Let’s go and have a look these 5 licks.

There was lick 1 around our E shape of this Hindu pentatonic. I first really got interested in this sound by players like Jeff Beck and Eric Johnson. I noticed that at that time, I had some minor pentatonic licks going on and stuff, but this gave a real new sound – fresh sound – to my playing when I was playing over dominant 7th chords. Especially in this example, you could be playing over your A7, as mentioned in the book. This lick here is almost very similar to a normal minor pentatonic lick, as I mentioned in the introduction. There’s only 1 note difference, and those notes in this lick itself is going to be the 6th fret of the 3rd string – the G string – and then the octave above that as well, which is the 9th fret of the top or the E string. Both those notes of C sharp there are giving you the major 3rd, so make sure you get it nice and fluid, this lick. Back and forth, the hammer-on and the pull-off at the top string takes a little bit of practice because you’re going to hammer from 5 to 9, and then pull back off to your index finger using your little hammer-on pull off technique there. Take it slowly, watch the videos a few times round to get it in your mind, and let’s go and have a look at Example 2.

Here’s our D shape of our A Hindu pentatonic. You’ll notice with these as you’re going through some of these examples that you’re getting slightly bigger stretches, and slightly less familiar territory as we go throughout the book in different chapters. That’s okay; just allow your fingers to become familiar with the tab shapes at the top of each page first. Play through the scale various times, do all the drills form the earlier chapters learning your scales. Sometimes once you’ve done that, the licks will feel easier to play because they’ll be slipping under the fingers more easily.

This lick itself – you’ve got nice little hammer-on pull off again. The jump between the 7th fret of the G string and the 11th fret of the D takes a little bit of practice. Once again, in a similar way you had on the top string, you’ve got this big gap you’re going to be using your index and your little finger. Work on your little finger power. If you don’t normally use it, it’s very,very useful to get that stretch. Most of the time of course, you’re applying a finger per fret rule, but sometimes you’re going to have to stretch that to get a note above that as well. Take it slowly as always, and let’s get on to example 3.

Okay, that was our lick 3. In this lick here, we’ve got a technique that I think is underused these days, and that is the unison bend. What a unison bend is,is where you’ve got one note that you’re already fretting, and then you’re bending a note on the string above it to become the same pitch as that. Now, this is incredibly useful for getting your bending bang on in tune, because if we do a unison bend that’s out of tune, it’s not so great, and it’ll irritate everyone around you, especially the cat. So in this example here, make sure you get the nice little rhythm at the start – sliding on the top strings as you saw there, and get these unison bend perfectly in pitch, bending the 12th fret of the 3rd string, and having the 10th fret underneath there, and then finishing off with that nice little dominant Hindu pentatonic finish there. Quite sweet sounding, works really, really well over all these dominant 7th chords. Let’s move on to Example 4.

That was example 4 up around the A shape. This one’s quite nice, because you’ve got different bends on the same string. On the top string there we’ve got 15th fret bend, and then a 14th fret bend, but you can see that there are different distances when you’re looking at your tab there. You’ve got a whole tone, then a half tone, then you’ve got some different variations in rhythm you see that there’s a little chunk in the middle that 12thand 14th frets that go da-da-da-da and there’s a little bit quicker. That’s nice to inject this little triplet in there as well, so don’t keep your rhythms all the same. Mix up your dynamics, mix up your rhythms, and keep your licks sounding fresh. Of course, don’t use the licks that I’ve done here. Make your own ones around the scales in this book. Let’s get on to Example 5.

This is a little unusual riff here. We’ve got some quite dissonant notes ringing into each other as we start off here with the 6th fret of the G string, 3rd fret of the B string, and then 5 and 2 there on the next strings up there. Then we finish off with a little classic dominant Hindu once again. I quite like this dissonance, its especially fun just for creating slightly unusual sounds. As you go through the book, the sounds will get progressively more different, and out there, and flavorsome. So, hopefully you’ve enjoyed these licks from the Hindu pentatonic. I certainly think it’s one of my favorite chapters to teach because it breaks people into new sounds, very very quickly you’re only adapting 1 note from your minor pentatonic.

So pop on the Hindu, the blues backing, the A7 backing, and we will get on to our next chapter.