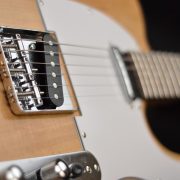 In part two of this six part series I’m going to show you a short idea inspired by the great Brent Mason and Albert Lee.

It’s no secret that country players often harbour extremely high levels of technique, and few demonstrate that better than hot picking legend, Albert Lee. A mainstay of country guitar since exploding on the scene in the 60s, his blend of fast alternate picking, banjo rolls, and double stops would inspire many generations of players.

We begin up at the 9th fret area using the C shape of the CAGED system to play a C chord. The lick starts by approaching the 3rd (C#) from a semitone below then play an ascending triplet. This is the idea that’s common in Lee’s playing, and is the area of technical focus here. It also features heavily throughout Brent Mason’s playing.

From here the concept moves to double stops, playing the root and 3rd of A (A and C# respectively), this then moves down chromatically to a G triad as a transition back to the A chord. The reason this is so much fun to play is that when transitioning back to the A chord you’re using the E shape of CAGED, so this lick uses simple chord fragments to descend the neck.

Ideas like this are common in the country style, with players using chord shapes as ways to move fluidly around the neck without losing a sense of context. You’ll hear this sort of thing from everyone from Brent Mason to Glen Campbell to Johnny Hiland, so pay careful attention to the positions and keep experimenting.

If you’re wanting to explore these concepts further, I go into it in considerably more detail in my book, Country Guitar for Beginners, the best place to take your country playing to the next level.

Until next time, keep picking!

Target Chord I in Blues Guitar
Scroll to top