In this lesson, we are checking out three guitar licks in the style of the blues legend, B.B. King. His style is instantly recognisable, from his trademark vibrato, to his beautiful touch, tone and expression on every single note.

Most twelve-bar blues progressions use dominant chords. This progression, however is a minor blues, and has a much sadder feel. The F#7sus4 chord adds a lovely suspension and when resolved to the F#7 creates a release. Try adding in embellishments to this progression, such as slides, hammer-ons and pull-offs. Record this twelve-bar progression as a backing track, and try to use examples two and three over it. 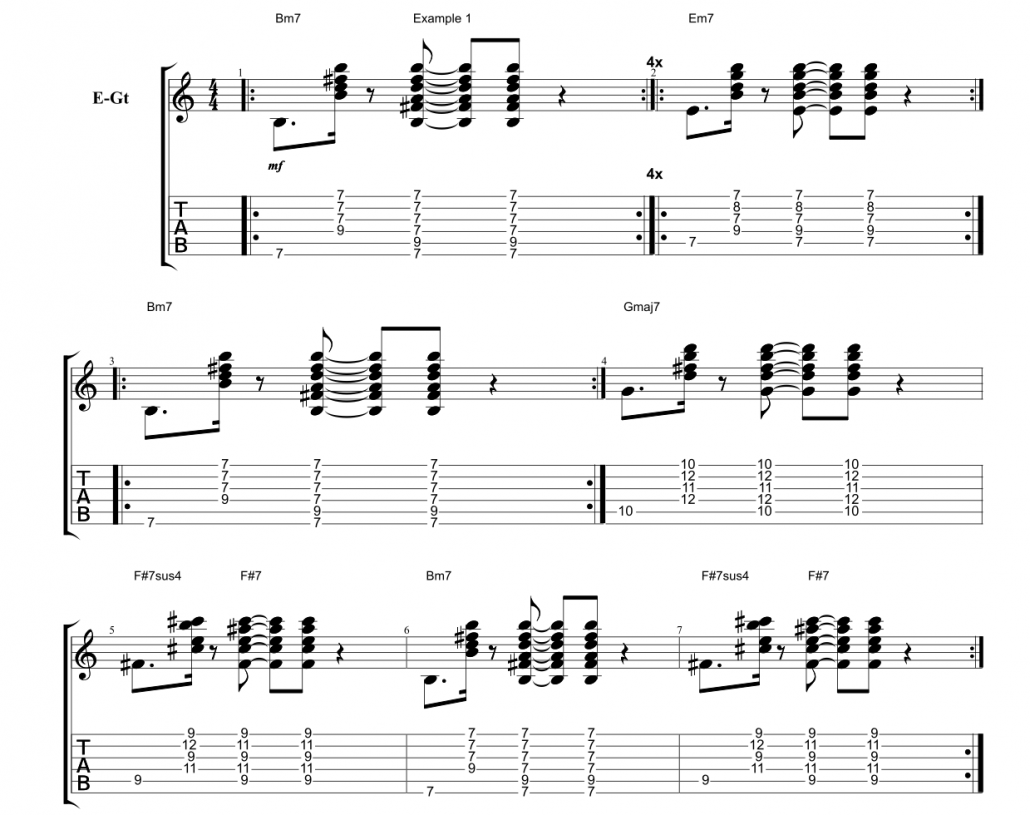 This example demonstrates B.B. King’s ability to maximize the use of just one note. The subtle vibrato, bends and position shift add up to create a special B minor Pentatonic lick. Remember “one note played well, is better than a thousand played badly.” Pay careful attention to the details in your own guitar playing such as the accuracy and clarity of your slides, and the style of your vibrato.

Here, our technique focus is ‘expressive touch’. This lick remains primarily around the second position of the B minor pentatonic (‘D shape’). Pay careful attention to the bends, slides and vibrato that are used here. Try limiting yourself to use only a few notes and maximising what you can do with them. 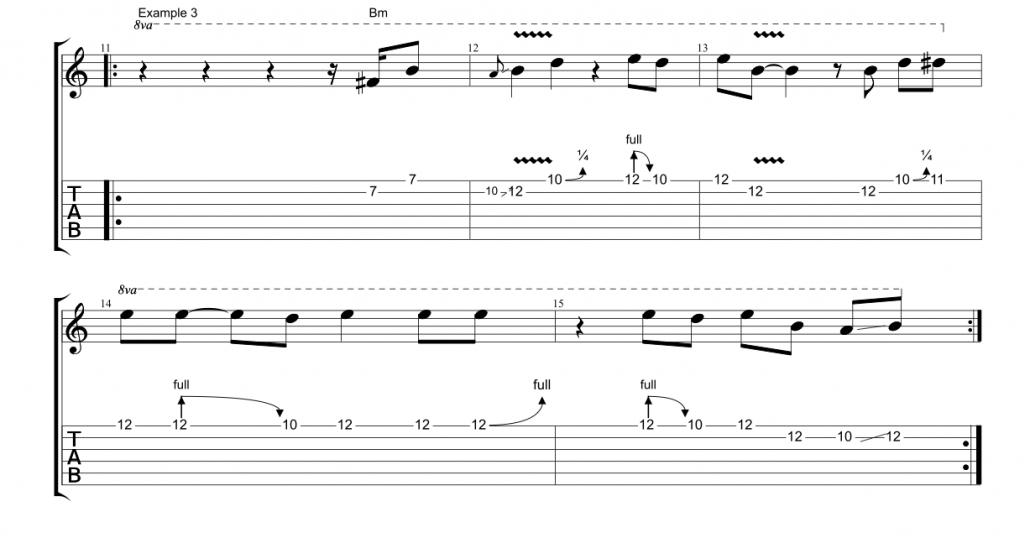 For classic B.B King style guitar licks, I recommend buying the album “The Best Of B.B. King.” My favourite track on that album being “The Thrill Is Gone.”

Hi guys, Simon here once again for Fundamental Changes. Today we are looking at the unbelievable talent of B.B. King. Let’s check that out, just after this.

B.B. King is arguably one of the most successful blues guitarist ever to play the guitar. His sound is so unique, that even from a few notes, you can pick up who he is.

The thing that I want you to take away from today’s lesson is that it’s better to play 1 note well, than a thousand notes badly. Today’s not about loads of techniques, it’s not about how many notes you can play. It’s making the most from every single note that you’re playing on the instrument. Really musical and expressive, using your dynamic range and everything like that when you’re playing today. Just the touch and the control you can bring, and hopefully add into your own playing from these blues licks. I think it’d be a really fun addition.

In a second we’re going to talk about the 3 licks, but really bring that into your playing. Even when you’re playing every note: expressive and musical.

Example 1 today revolves around a chord, as you’re probably becoming very familiar with. We’re actually going to use a little minor blues sequence, but the chord we’re looking at today is an F sharp 7sus4. This is a really awesome sounding shape, and it also obviously resolves to the F sharp 7. Keep up on your F sharp 7 shape, which will be your 9th fret bar chords in the 5th string, and then the 2 notes on the 11th fret of the 4th, and the 11th fret of the 2nd string is your open A 7 shape there.

All you’re going to do is you’re going to pop your little finger up into the 12th fret. It might feel a little bit uncomfortable. You can see there, my fingers are actually slightly on angle to get that entirely. Here’s your F sharp 7sus4, then that resolves back to F sharp 7.

The progression we have here today is B minor 7, E minor 7 that repeats, G major 7 here up around the 10th fret, and then these 2 little chords I just mentioned, the F sharp 7sus4, and the F sharp 7.

Back to your B minor 7 and those 2 again that I just said, the F sharp 7sus4 and the F sharp 7. Most of the time, when we play blues licks, we’re playing around our dominant 7th chords, usually our E7 shape, and E without the little finger, and our A 7 shape that I just mentioned there on the – if we were on B we’d have B7, E7, and F sharp 7. Those would be what we would play over for a 12 bar, but I like to play over a minor blues progression.

Let’s have a look at this example. Hopefully it brings some new ideas. Also, you can add in hammer-ons and pull offs and slides, and anything to this that you want. I’ve done it quite straight, so you can play some nice B.B. King style licks over it . Let’s check it.

Example 2 is around a technique as we always look at. Today is not a massive technique, but it’s a little thing that B.B. King does that make it instantly recognizable. What he basically does is wherever you are playing, today’s licks are around B minor pentatonic, around the 7th fret 1st position, this lick. He goes up an octave to get the root note. In this case, the 19th fret plays that a few times, and then he brings that back into his normal position that he’s working around.

This lick here, you’re going to play the 19th fret a few times, really milk that root note, nothing major, but classic B.B., and then moving into the silky smooth vibrato, bends, and everything. The touch and the control from this one is fun. I really like playing this lick, and you’ll instantly know who it is play when I play this one.

Let’s have a look at that one too.

Example 3 is in the style of. Today I’ve made is fairly simple, but again following the same theme of milking every note that you have. We start off in position 1 of the B minor pentatonic. We’re going to slide 10 to 12, moving into the 2nd position. Then we start to work on these little bends on the top E string, chord to tone bends, and then having a little passing note, and then loads of bends at this 12th fret, the E to the F sharp there, on the top string, and he really likes to use this bend, this 2nd position bend.

If you’re used to just playing around with your position 1, you can try to start to add in some position 2 licks as well, and then just ends with a tiny little slide on the end there to the B on the 2nd string.

Again, not a complicated lick, but see what you can get out of it, and as I always say to these licks, make sure you move them into as many keys as you can, so they’re useful. Move it into G minor, and just try moving these around, and then do the lick 2 there as well, and then do your minor blues progression there as well.

Hopefully these 3 licks will give you something new to try out, but really work on your expressive touch control, and musical versatility. Take care.

Hi everyone, thanks for watching this video on B.B. King style licks. I really hope you’ve got something from it. As I always say, go and check out Joseph’s unbelievably awesome guitar, free guitar lesson website, Fundamental Changes. Go and subscribe to my YouTube Channel, SDPguitar, where I bring you awesome bite-sized guitar lessons for free with tabs. Check it out.