The b9 Diminished Substitution in Jazz Guitar Soloing

The previous lesson showed you how to add richness and colour to your jazz guitar lines by using arpeggio extensions and today we are going to be looking at how to add chromatic tensions using a diminished substitution on the dominant chord in the major ii V I progression.

The 7b9 Diminished Substitution for Jazz Guitar

Jazz soloists use a wide variety of non-diatonic arpeggio substitutions to add interest and tension to solos.

A non-diatonic substitution is one where the substitute arpeggio contains notes from outside the key centre or parent scale of the chord. One of the most common places to use a non-diatonic substitution is on a functional (resolving) dominant chord. In the previous example, the functional dominant chord is F7 and it is resolving back to the tonic chord of BbMaj7.

F7 is seen as a point of harmonic tension that is released when it resolves to BbMaj7.

As the dominant chord (F7) is a point of tension in the progression, jazz musicians reason that it is O.K. to add any additional amount of tension to the solo at that point, just so long as the tension in the melodic idea finds resolution when the chord resolves to the tonic in the next bar.

The most common substitution on a functional dominant 7 chord is to play a diminished 7 arpeggio from the 3rd of the dominant chord. This often simply referred to as The Diminished Substitution

Let’s see which notes are targeted when we play a diminished 7 arpeggio from the 3rd of F7 (A).

As you can see, when an ADim7 arpeggio is played over the chord of F7, the notes are almost identical to the 3-9 arpeggiothat we studied earlier. The one very important difference is that the root (F) has been removed and replaced with a b9 interval (Gb).

This can be seen by comparing the following diagrams:

This is quite a big simplification, but it generally holds true. 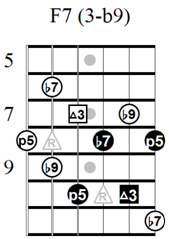 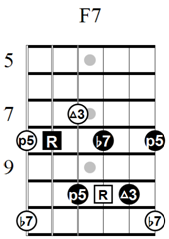 The ADim7 arpeggio contains all the important notes of the F7 chord and an additional b9 interval. The sound created is F7b9.

The following example uses 1-7 arpeggios for each chord but uses the ADim7 arpeggio on the F7 chord to create an F7b9 sound.

All you need to think about is raising the root of the F7 arpeggio by a semitone.

The root isn’t important because someone else will normally be playing it.

Treat the b9 interval exactly as if it were a normal chord tone.

Here is another example that uses chromatic approach note ideas.

The root isn’t important because someone else will normally be playing it.

This final example adds in some 1/8th note rhythms.

Try out the previous three ideas with Backing Track Two. Can you hear how the b9 interval adds colour and tension to the dominant chord? It is common for the Gb in the F7b9 chord to resolve to the note F in the BbMaj7 chord.

Spend a few days exploring the 7b9 sound. As you get more fluent, add in the 3-9 extended arpeggios on the other chords and combine these with the 7b9 arpeggio on the F7.

The following positions should not be attempted until you are confident in your ability to apply arpeggios in the first position fluently and from memory. It is also recommended that you study some of the other common progressions in this book before returning to this section.

As your skills develop, you may wish to apply the ideas in each lesson to other positions on the guitar. The following chord and arpeggio diagrams will help you to use the previous concepts in new areas.

1-7 Arpeggios and Chords and Scales: 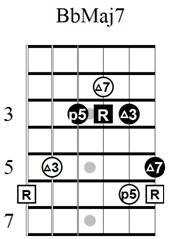 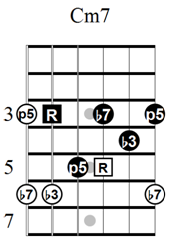 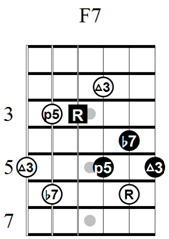 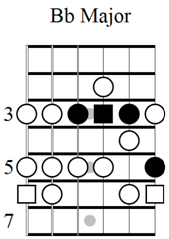 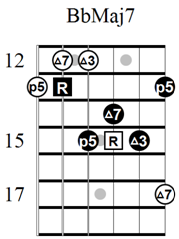 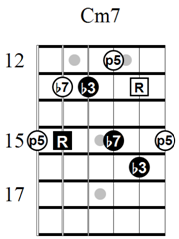 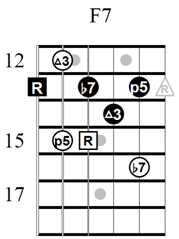 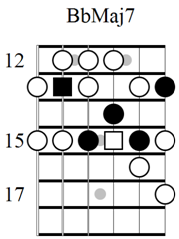 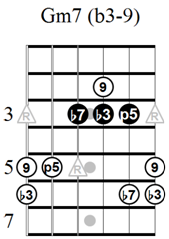 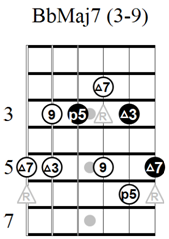 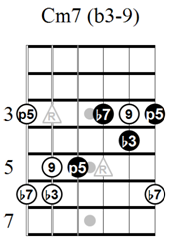 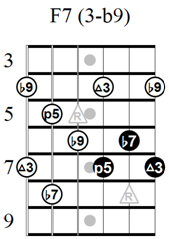 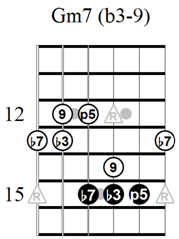 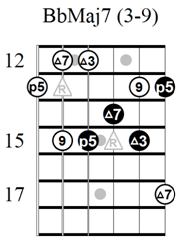 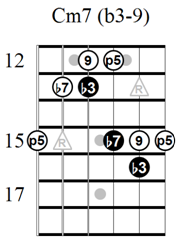 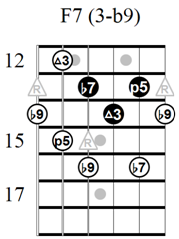 This, and the previous two lessons have been an extract of my book Chord Tone Soloing for Jazz guitar where I show you how to approach the 13 most common chord progressions in jazz guitar. Find out more here: 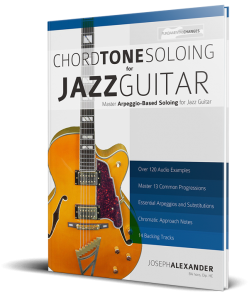