When learning to solo on a jazz blues it is important to learn to target intervals in each chord of the progression. This will help enormously when it comes to targeting arpeggio notes, when we look at more complex ideas such as chromatic approach note patterns and scale choices in chapters six and seven.

The idea is to target intervals of each chord and see how they move as the chords change.

The following exercises are vital for mastering your fretboard.

We will begin by only playing the root of each arpeggio over the chord changes. Be patient, even if this seems simple, as the following exercises build towards complete mastery very quickly.

Exercise one – play only the root of each chord.

Notice that in this position, there is more than one root in each shape. Keep playing over backing track two until you are confident you can find the root of each arpeggio in any octave.

This time, we will isolate the 3rd of each arpeggio. This is more difficult than playing just the root and will help increase your vision and aural ability while soloing.

Exercise two – play only the 3rd of each arpeggio.

Once again, there are 3rds in different octaves, and not all of them are included in the previous example.

Repeat this exercise for the 5ths and b7s of each arpeggio. Use the diagrams in chapter three to help you.

Now we will do something slightly different: We will play the 3rd of the Bb7 chord in any octave, and then move to the closest note in the Eb7 arpeggio.

We begin on the 3rd of Bb7 (because the root (Bb) becomes the 5th of the Eb7 chord (also Bb)). We are interested in finding specific, targeted movements between the Bb7 and Eb7 arpeggios.

In jazz, the movement from the 3rd of one chord and the 7th of a another, is one the strongest resolutions possible. While the 3rd of Bb7 (D) can move up to the root of Eb (Eb), I would highly recommend that you spend some time learning to hear the resolution from the 3rd to the b7. This is called ‘guide tone’ movement.

Repeat the previous exercise beginning on both the 5ths and b7s of the Bb7 chord. You will notice that the 5th of Bb can either rise one tone to become the 3rd of Eb, or descend to become the root.

The really important movement to take notice of is the movement from the b7 of Bb as it falls by a semitone to become the 3rd of the Eb chord. This movement is shown in both octaves in example 5d:

It may seem like we are doing a great deal of ‘prep work’ before we get to actually soloing and building jazz blues lines, however you will quickly hear the benefit of this groundwork reflected by the strength of your jazz lines.

Here is one possible way to solo using guide tones over the changes: 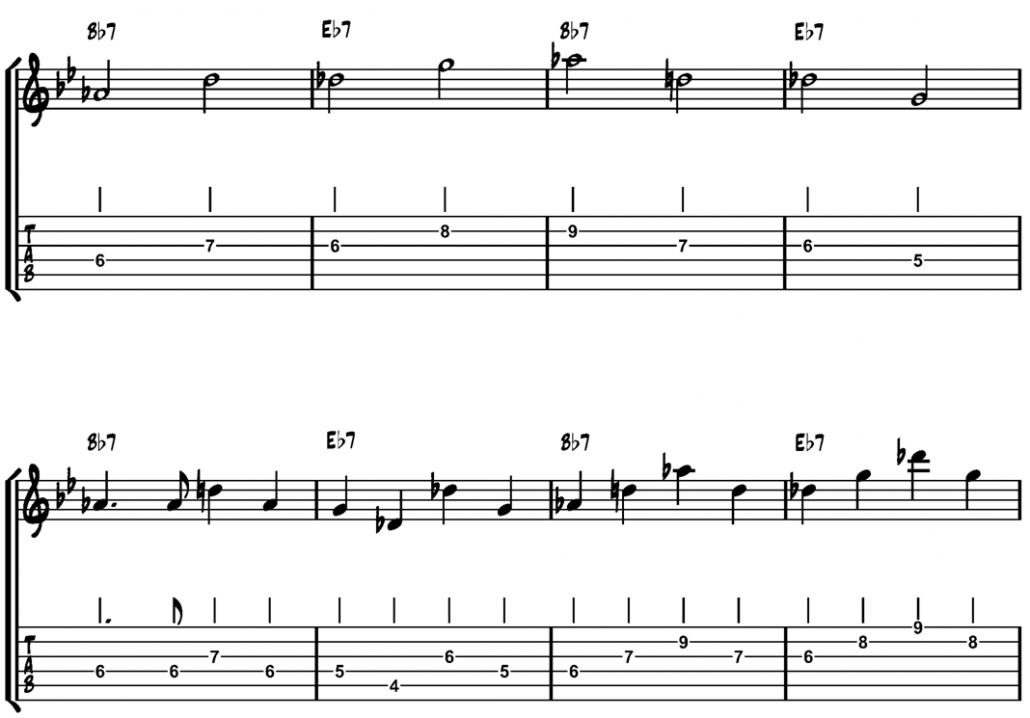 Notice how I begin the exercise simply, with just two notes per bar, and gradually move to slightly more complex rhythms. Feel free to move into 1/8th notes as you gain confidence, but don’t lose sight of the fundamental point of this important exercise – to hear guide tone movements and play them accurately over changes.

You can check to see if you’re doing this exercise correctly by playing it without a backing track. If you are changing chords in the right place and hitting either a 3rd or b7 on the change you will be able to ‘hear’ the chords changing in your head as you solo. The ability to imply a chord change by the choice of notes in a solo, is another fundamental element to competent jazz guitar soloing.

For fun, try playing a solo based around the Bb Minor Pentatonic / blues scale, but add in the guide tone movements from the previous examples to articulate the chord changes. You will find that by combining the minor pentatonic / blues scale with these concepts, you can go a long way towards playing a strong jazz blues solo. For now, stay away from bending notes and vibrato and stick to 1/4 note, and 1/8th note rhythms.

Here is the scale diagram for the Bb Minor Blues scale, and a couple of sample licks which combine the blues scale with guide tone and arpeggio-based voice leading. 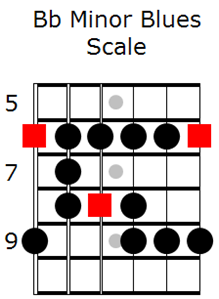 As you can see, it is worth spending time here coming up with ways to navigate the I – IV change using just the minor blues scale and the related arpeggios to target guide tones. There are, however, other scales and approaches we can use to sound more ‘jazzy.’ In the next chapter, we will study the Mixolydian ‘Bebop’ scale, and learn how to combine it with arpeggio ideas for an important, traditional jazz sound.

Next, learn how to use approach note patterns for targeting intervals

To master jazz blues soloing, check out my book:

Target Chord I in Blues Guitar