In the previous instalment we explored using a range of dynamics to give more shape to our melodic playing. In that lesson we touched on the tonal variation that we can get out of the guitar by picking harder or softer. This week we’re going to expand on that by looking at the different ways we can alter the tone of the guitar with the onboard controls found on most electric guitars. Using the pickup selector, as well as the tone control.

Although we’re not manipulating any pedals or effects, all of the following techniques are in fact a form of EQ as they are changing the relative overtones on the same fundamental.

Being able to move quickly between bright and dark sounds is similar to the contrast of vowels and consonants in singing. Perhaps the best example to draw on is jazz scat singing. Although they are rarely using discernable words, great jazz vocalists will draw on different phonemes and sounds to help give a wider range of expression to their improvisation.

We’re going to be using the pickup selector musically to change the tone of different notes. This technique is easiest on a Stratocaster, Telecaster or ‘super-strat’ type guitar where the pickup selector is next to the volume pot below the pickups, but those with a Gibson style instrument with a pickup selector mounted on the top horn will still be able to apply the concept effectively.

On all guitars, the bridge pickup boosts the treble, and increases the ‘bite’ of the note, while the neck pickup provides a smooth warmer sound in comparison. Using the fourth position (next to the bridge selection) should produce a thinner, twangy sound that can be perfect for articulating percussive licks when the weight of the full bridge pickup feels like a blunt instrument!

First of all we have a country esque phrase and the pickup selector is set to next to the bridge position, using just one of the bridge humbucker’s coils. Having coil-taps installed on an instrument with humbuckers is a great way to broaden your tonal palette by giving you access to both the Les Paul roar, and an articulate telecaster voicing on one instrument.

If you try this lick with all of your pickup configurations, you should notice how the one we’re using brings out the articulation of the notes most effectively. 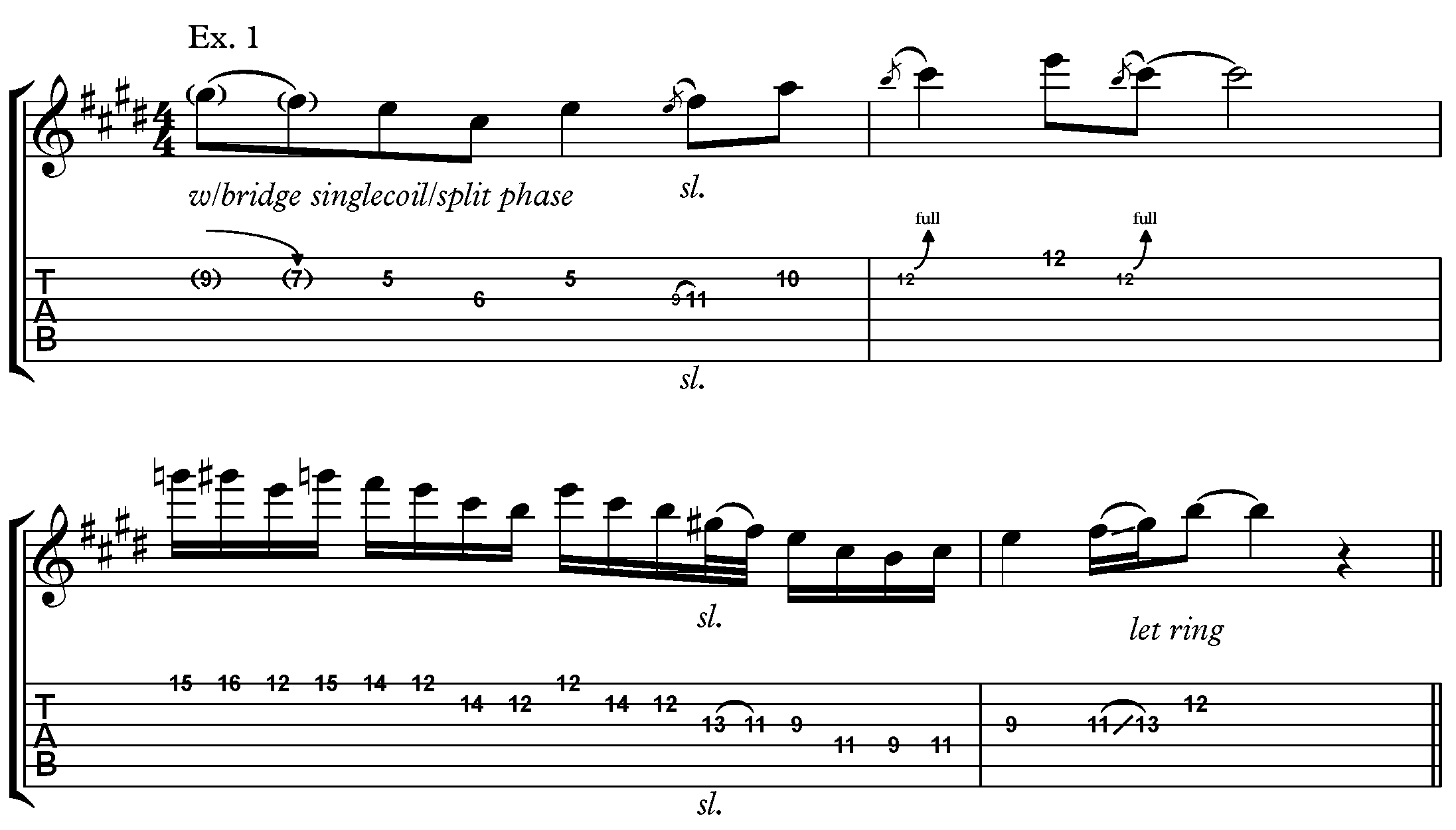 While staying with the same guitar (the audio was all recorded on my custom Alder body 7 string RG, fitted with two Dimarzio humbuckers), we’re going for more of a traditional jazz guitar type sound. Selecting the neck pickup ensures the maximum bass response. I also picked the strings over the fretboard rather than in the normal position over the pickups, which further enhances the bass tone of the string’s vibration. As well as using the pickup selector, I rolled the tone control off completely and backed off the volume slightly to remove even more high frequencies.

Our final lick shows a modern rock approach to using the pickup selector of players like Steve Lukather and John Petrucci who will change pickup frequently during a solo to suite each lick or even each individual note. It can be quite difficult at first to integrate some of these changes with your regular playing. On a Strat, the best approach is to use the spare fingers on the picking hand to flick the selector switch back and forth. Practice the final run slowly to avoid disrupting the picking motion. The last downstroke should continue its movement towards the selector switch to knocking onto the bridge position as quickly as possible.

If sweep picking is new to you, check out my lesson series on sweeping here to get your chops up to the task! 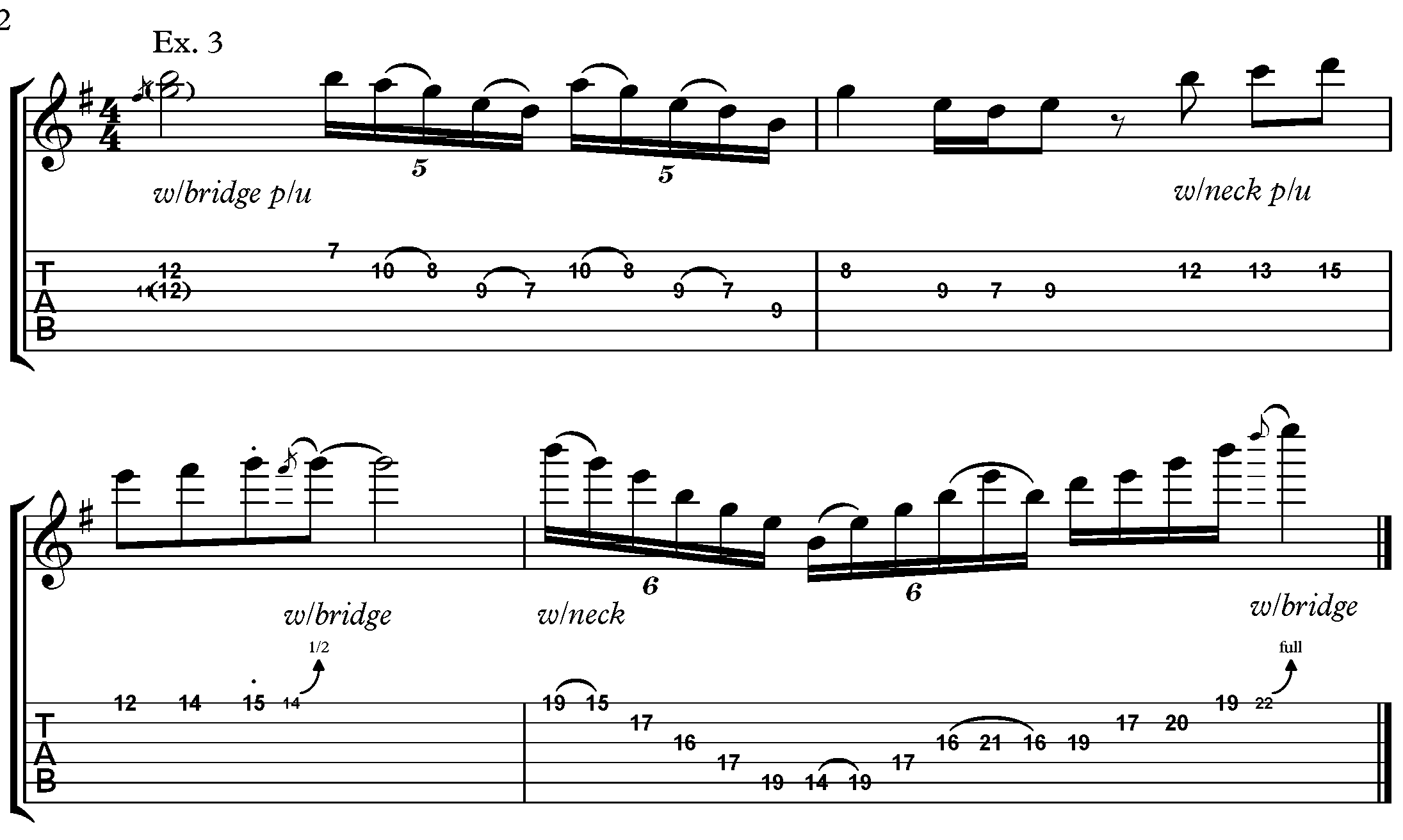 As a general rule of thumb, the bridge pickup is used for screaming bends and bluesy influenced licks, while singing melodies or shred licks are played on the neck pickup to give a smooth articulation.

Jimi Hendrix used lots of pickup selector manipulation, even using the technique of rapidly switching back and forth between them while sustaining one note as heard in Voodoo Child (Slight Return). Steve Morse makes very musical use of the tone pot and in fact has a modified tone pot (a higher value transistor on the tone pot) which has a wider sweep to produce an effect almost as dramatic as a wah pedal!