The Lydian Mode for Guitar Part 1

Before tackling this series of articles on the Lydian Mode, get up to speed with the ‘dissecting scales’ approach in this primer lesson.

The Lydian Mode for Guitar

In my opinion, The Lydian Mode is one of the most beautiful, emotive scales there is. It contains only one note that is different from the major scale, but this small alteration completely changes its character. Lydian is used extensively in rock guitar ballads by players like Steve Vai and Joe Satriani and is the 4th mode of the Major Scale.

Songs constructed around the Lydian mode:

How I Miss You – Foo Fighters

The introduction to Hole Hearted – Extreme

The formula for the Lydian mode is: 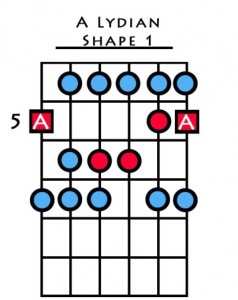 Learn to see and hear all the notes in this mode around the A Major 7th chord outlined in red.

When harmonised, the Lydian mode gives the following sequence of chords:

When forming chord progressions to highlight the characteristics of the Lydian mode, some varying techniques are used. Often in rock it is played over a static vamp, and sometimes even the tonic Major 7#11 chord is sustained: 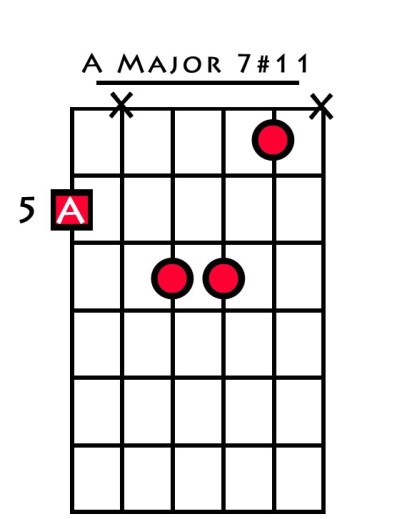 This chord accurately outlines the full harmony of the Lydian sound. It is worth noting that this chord voicing does not contain the 5th of the chord as the semitone clash between it and the #11/4 is undesirable.

Another approach is to use upper structure triads over a bass note. Notice that chords I and II are both major. We can use those two chords together over the tonic bass note to create a rich, compelling harmony. For example:

This is the approach that Joe Satriani takes in Flying in a Blue Dream; he simply arpeggiates the same chords in the key of C Lydian.

Due to the open, ‘spacey’ nature of the Lydian mode, it is often played over suspended chord vamps. For example:

Continue with our deep study of the Lydian mode in the next lesson where we will be looking at 5 unique licks written in the mode, plus how to solo with intervals and triads.