One of the most common things I come across when teaching is the phrase “I just freeze, and I don’t know what to play”. This is commonly associated with jam sessions and trying out new guitars and pedals at the local music store. My favourite technique for combating this is using lead guitar fills between chords. In today’s lesson, I am going to show you how to use power chords, open string drones in the style of Andy Timmons, and a lick in the style of Jimi Hendrix! Make sure you watch the YouTube video to see and hear the full speed and slow speed version of all the examples.

Example one combines power chords (A5, G5, and F5) in the key of A minor with the A minor pentatonic scale (A C D E G) to create a rock groove. This simple and effective idea is a quick way to get comfortable adding in lead guitar fills to your rhythm playing. 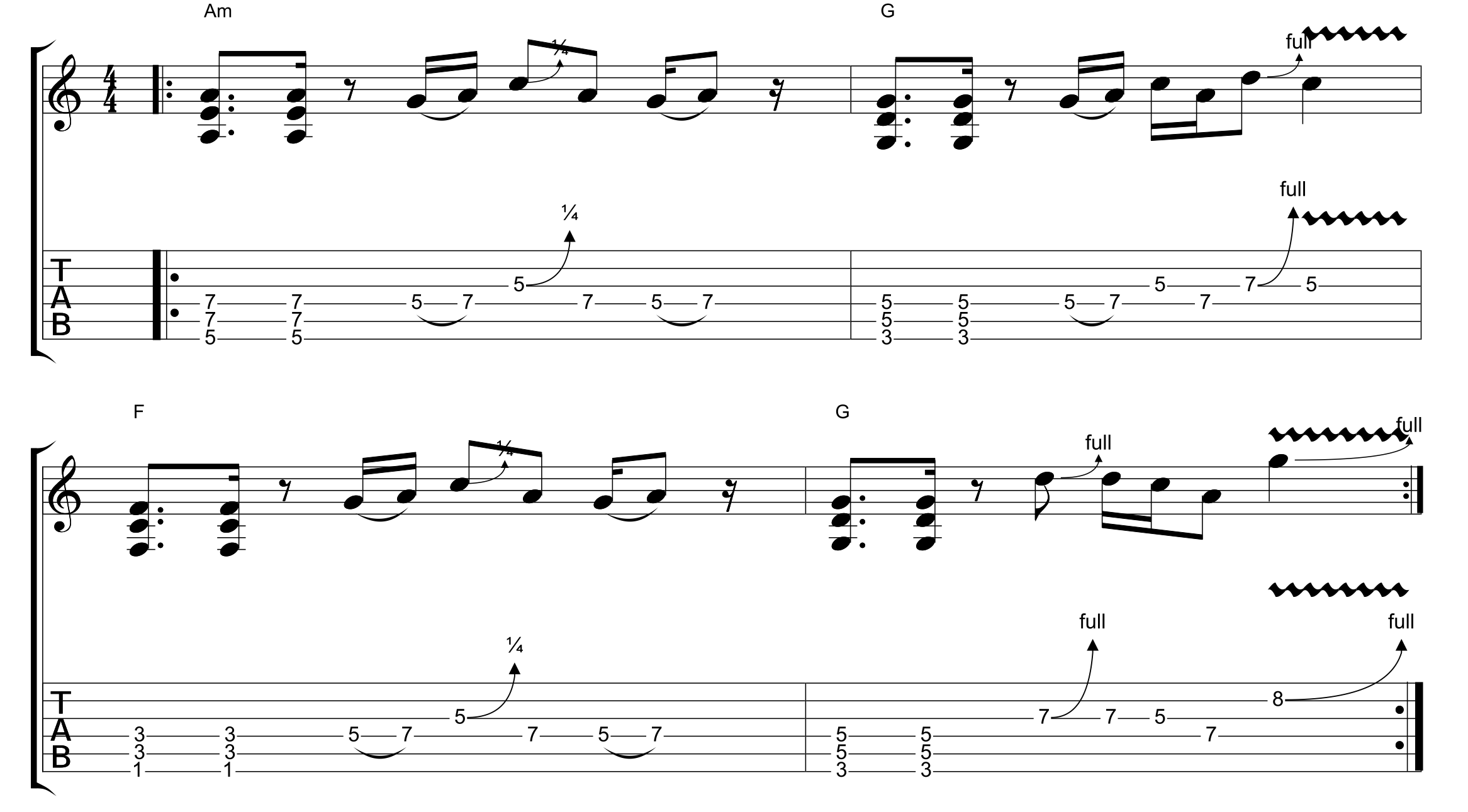 I first got introduced to Andy Timmons when studying at the Guitar Institute. His melodic rock style blew me away as it combined rhythm and lead guitar licks into one guitar part. Example two uses open string drones with some melodic phrasing in the A Major scale (A B C# D E F# G#). Be sure to listen to the track Electric Gypsy by Andy Timmons for further listening.

Hendrix raised the bar when it came to lead guitar fills. In example three I have tried to demonstrate a few classic Hendrix phrases in the key of D major. Make sure you watch the slowed down version on YouTube so you can hear how I phrase this idea. 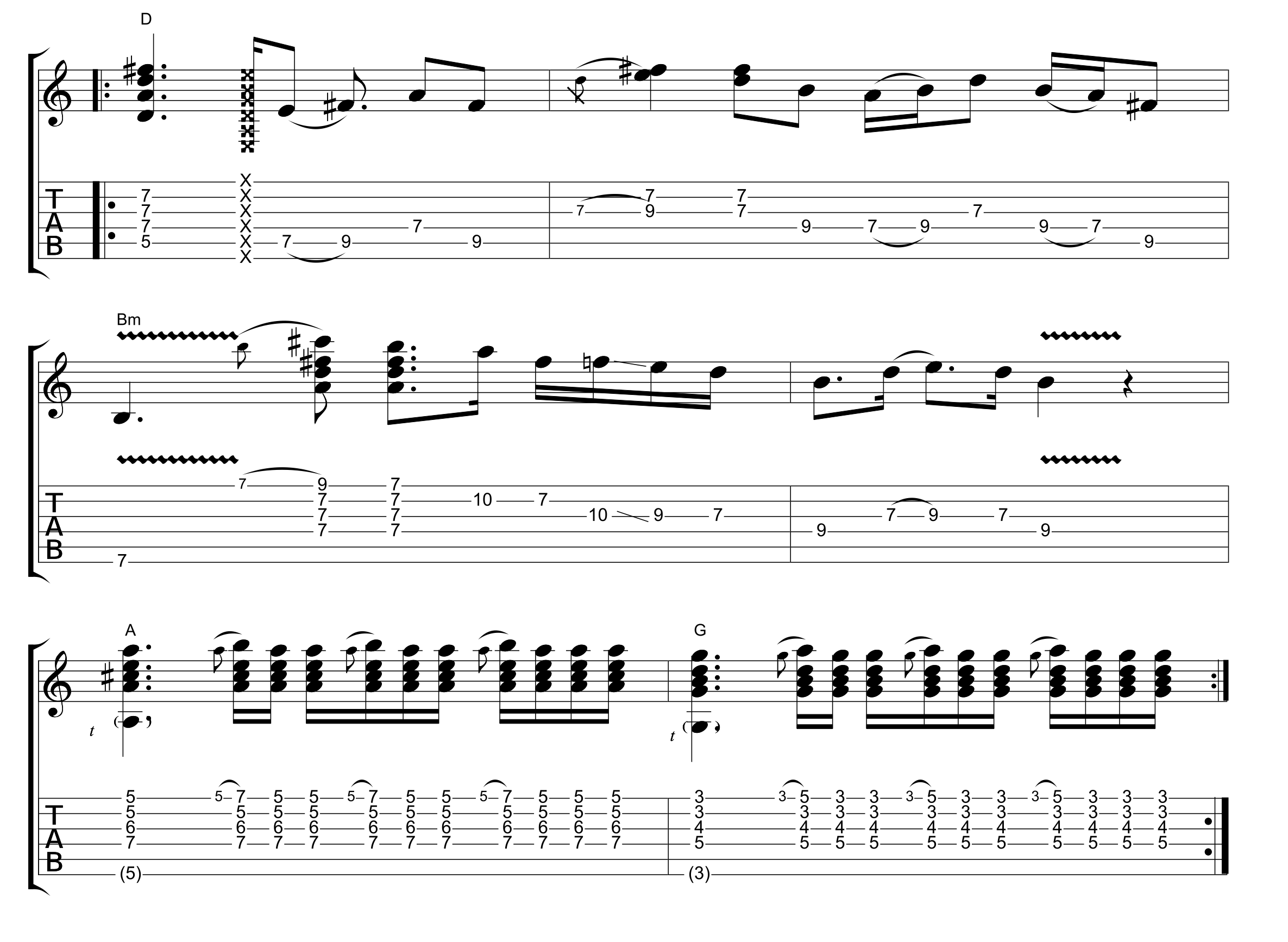 For classic lead guitar fills, I recommend buying the album That Was Then, This Is Now by Andy Timmons. My favourite track on that album being Electric Gypsy.

Hi YouTube, Simon here once again for the amazing Fundamental Changes. Today we are going to look at 3 rocky ways to blend rhythm and lead guitar fills in your own playing. We’re going to have a look at those, just after this.

Something that I’m frequently asked as a teacher and player out in the guitaring world, is people always say to me ‘I just don’t know what to play when I’m in this scenario. I just freeze. I’m at a local music store, I’m out jamming with a friend, and all of a sudden all of the things that I thought I knew I don’t know anymore.’ One of my favorite ways to counteract that is to use little chord progressions by adding lead guitar fills as well, to build a complete one-guitar arrangement.

Example 2 uses an idea that I stole from the magnificent Andy Timmons. If you don’t know much about Andy Timmons, he’s an incredibly melodic rock player who uses loads of techniques. In his tune Electric Gypsy, he uses open strings and then creates a melody on the string below it. This example uses A Major and D Major type themes with an open A root and an open D root, the 5th and the 4th string. Then you’ll add in some lead guitar fills on the string below it. Quite melodic, quite a cool way to do it, so try having an open droning open string, then playing some little licks on the string below it, quite a fun little idea for droning open strings. Let’s look at Example 3.

As most of you are probably aware, Hendrix was pretty much a master of combining rhythm and lead at all points in his playing. Tracks like Little Wing, and loads and loads of other tunes, you can get this vibe. I’ve created a Hendrix-esque, and I’m saying Hendrix-esque because it’s not exactly Hendrix. It’s just trying to use some of his techniques idea in the key of D Major. It has got D Major, B minor, A and G progression going on here in the key of D. I’m using fills between those chords, as we’ve been talking about all the way today. For the D Major, I’m playing D Major pentatonic or B minor pentatonic, if you like. For the B minor, I’m playing a little B blues lick. For the A I’m just using the top strings to create a little Hendrix Major chord example in the hammer-ons, and the same with the G, quite a fun example you can move to many, many different keys.

Hi everyone, thanks for watching this rhythm guitar with lead guitar fills lesson. I hope you got something from it. Make sure you check out my new book Melodic Rock Soloing, link in the description below.

Creativity with Question and Answer Structures
Scroll to top