The phrase ‘ Chord Voicings ‘ refers to the way the notes of a chord are arranged, both in musical notation and on our instrument.

In Part One, I pointed out that a ‘7th’ chord contains four notes; the root, third, fifth and 7th of the parent scale. The easiest way to arrange these notes is to stack them one on top of each other. For example, the chord of C Major 7 (CMaj7) has the formula 1 3 5 7 which generates the following notes:

These notes can be stacked up in the following manner:

Notice how the notes C, E, G and B are voiced in order from low to high. When the chord tones are in order like this (1 3 5 7) it is called a close position chord. N.B. this is close as in ‘near-by’, rather than close as in ‘shut’.

The above example is a perfectly legitimate way to voice a CMaj7 chord, however, a much more common way to voice chords on the guitar is to use ‘drop’ voicings. There are three main types of drop voicings playable on the guitar:

What musicians mean when they say ‘drop voicings’ is that one or more of the notes in the chord structure have been lowered by an octave.

For example, in a drop 2 voicing, the second highest note is dropped by an oc-tave.

This concept is shown in the following example. (Don’t worry about playing the examples in this chapter, just make sure you are comfortable with the concepts described here.)

In the above example, you can see that the second highest note (G) has been dropped by an octave and is now below the root of the chord (C).

The resulting drop 2 voicing is still a CMaj7 chord, but it now sounds quite different to the original close position voicing.

In a drop 3 voicing, the third highest note is dropped by an octave.

Finally, drop 2 and 4 chord voicings have both the second and fourth highest notes dropped by an octave.

In example 1d, both the G and C are dropped by an octave to form a new voicing of the CMaj7 chord.

Drop 2, drop 3, and drop 2 and 4 voicings are commonly used chord structures in music. Much of this book will be about exploring their practical application in guitar playing.

There is one other essential point to understand before we look at applying these voicings on the guitar. It is the concept of inversions.

When the root of the chord is played in the bass, that voicing is said to be in root posi-tion. In the context of a CMaj7 chord, this means that the root note of the chord (C) is the bass note (lowest) in the voicing.

Here are two ways to play a CMaj7 chord in root position:

Both of the above chords are CMaj7 in root position (they both also happen to be close voic-ings).

To create an inversion of the chord, we can simply move the bottom note of the voicing up by an octave. By doing this we are putting the third of the chord (E) in the bass.

Again, don’t worry too much about playing these ideas on the guitar, just focus on learning the concept. These particular voicings are tricky to play on guitar and not very useful. You will learn how we make them useful in the next chapter.

The second chord in the previous example is called a first inversion chord. The chord has been inverted via raising the bass note an octave so that the third of the chord (E) is in the bass.

We can repeat the same process of raising the bass note to create second inversion and third inversion chords.

The following example shows how a root position chord voicing becomes a first, second and third inversion chord by raising the bass note an octave each time.

If I was to repeat the process one more time, can you see that the chord would return to a root position voicing? It would be the same as the chord in example 1e.

This concept of inversions is extremely important because it allows us to create four voic-ings of any four-note chord.

Any of the three drop voicing structures discussed above can be played in four inversions. When you consider that many of the drop voicings can be played on different sets of strings, and that there are four main chord types (Maj7, min7, ‘7’ and m7b5), you can quickly see that we can be left with a bewildering array of chord voicings and melodic opportunities.

Don’t despair however! This book discusses all of these opportunities in an organised, con-textual way. We will examine how each of the chord voicings is best used musically and how to develop ‘chord licks’ that cover a wide variety of common progressions.

If you really want to develop your rhythm guitar knowledge and work towards mastery of the guitar, this kind of study is essential. When approached in the right way, this kind of practice isn’t nearly as complex as it sounds and is a fun, rewarding way to approach the guitar. It’s also extremely expressive, musical and impressive!

You may have heard the phrase “learn the theory and then forget it”. This is exactly what I want you to do now.

All you need to know is that drop voicings allow us to arrange a chord in differ-ent ways, and inversions are simply chord voicings with a different note in the bass.

We will begin by examining and musically applying the most common ‘drop 2’ guitar voic-ings.

Drop 2 voicings are some of the most widely used, versatile chord voicings that are used in modern music. They are not instrument specific and can be played on any harmonic instru-ment or ‘shared out’ between the parts of a horn, brass or string section.

Throughout this section, we will be splitting the guitar into three string groups, the first (high E) to fourth (D) strings, the second to fifth strings and the third to sixth strings.

We will begin by learning the four voicings for a drop 2 Fm7 chord played on the top four strings. Pay very careful attention to where the root notes (squares) are in the following diagrams. By knowing where the root notes are you will find it is much easier to transpose these chords into other keys later. 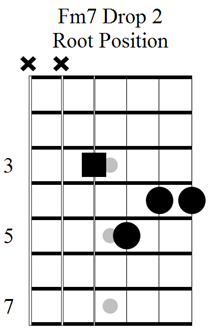 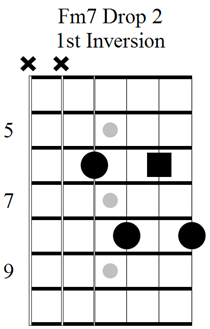 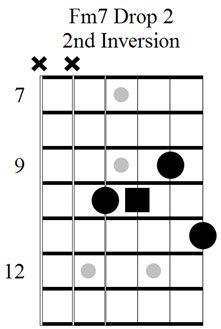 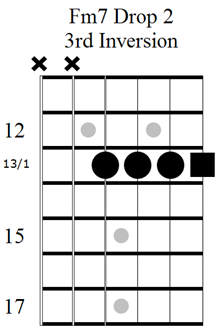 Begin by playing slowly through the four voicings. Remember that the final voicing can be played at either the thirteenth or first fret.

To help you memorise the shapes, practice the following ideas over backing track one. Don’t worry too much about playing in a regular rhythm, just work on smoothly transitioning between the four shapes.

1. Ascend and descend through the four voicings.

2. Practicing moving between pairs of chords, for example between the root and first or the first and second inversions of Fm7.

Finally, try simply jamming along with backing track one and playing these voicings when-ever you like.

As mentioned previously, the key to using these chords effectively is always to know where the root note is in each voicing. The following diagram shows where all the F notes are lo-cated on the top four strings. Learn your voicings in the context of these root notes.

One useful tip is to listen to great piano players like Bill Evans, Keith Jarrett and Bod Powell and listen to how they phrase chords rhythmically, especially while ‘comping’ under the so-los of other musicians.

The next stage in internalising these chord voicings is to join them up by adding a walking bass line between the lowest notes in each chord shape. To do this, we will imagine that we are in the key of F Minor and use the F Minor (Aeolian) bebop scale to ‘walk’ between each voicing.

The F Minor Bebop scale can be played like this along the fourth string of the guitar:

Begin by playing the lowest possible voicing of the Fm7 chord:

Notice that the lowest note in this voicing (Eb) is contained in the F Minor Bebop scale above.

Play the above chord on beat one of the bar, and on beat two play the next note of the F Minor Bebop scale (E) before playing the next available voicing of Fm7 on beat three.

Continue moving between Fm7 voicings as you ascend the neck in the above manner. There is one scale note between every chord voicing. Here is the full sequence ascending.

Don’t worry too much about staying in a strict rhythm at first, just see if you can play through the examples without making a mistake.

As you gain in confidence try to join up the ascending and descending examples with no gaps. 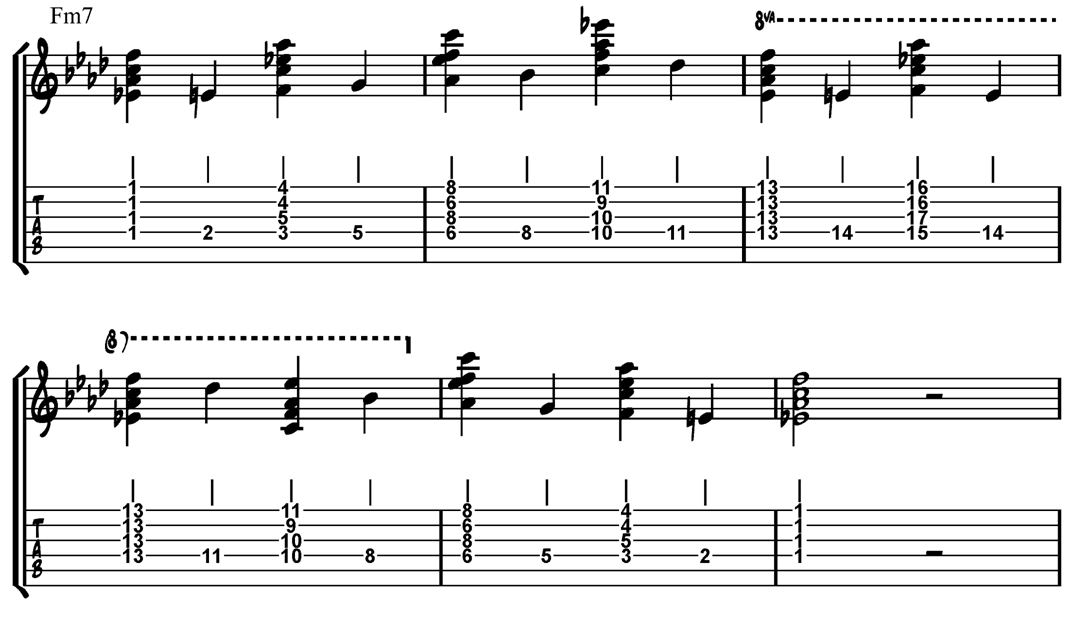 Walking bass lines are a subject unto themselves and will be covered in Part Three of this series when we look at chord melody playing. In the context of learning chord voicings, however, they are an excellent musical tool that helps you to memorise and form drop 2 voicings quickly and accurately.

Keep in mind that Fm7 will not always be the tonic chord in a key. For example, it could be the ii chord in the key of Eb Major or the vi chord in the key of Ab Major. In these circum-stances we would use different scales to derive the notes for the bass line. These would normally be strongly related to the tonic key of the progression.

In this book, the Fm7 will always be the tonic chord in the progression unless otherwise stated.

Before we move on, make sure you can form these m7 voicings in other keys. As men-tioned, knowing each chord in context of its root note is the secret to playing them in other keys.

Learn the minor 7 chord voicings in the following keys.

The root notes are shown on the following page:

Practice using all the techniques on pages ten to help you internalise the chords and also try adding the walking bass line as you move between voicings.

Also, you should flick forward to chapter eighteen where there are exercises based around common musical cycles. These exercises are the key to developing your ability, vision and creativity as a guitarist. The exercises in chapter eighteen are challenging, but they are the ones which will help you master any chord type, voicing or inversion quickly and masterfully.

After every chapter in this book it will be worthwhile to apply the exercises in chapter eighteen to any new chord voicings or inversions.

Next, we will stay on the top four string group and take a look at the dominant chord of Fm7: C7.