In this lesson we will explore the inversions of the C7 drop 2 voicing chords on the top four strings. The dominant 7 chord is extremely common in jazz and is often altered with chromatic tensions (which we will discuss in chapter nine). It is essential you master the dominant 7 chord voicing before moving on as we will be doing a great deal of work with it later in this book.

The four, drop 2 voicings for C7 are played as follows. Remember to pay great attention to the locations of the root notes in each shape. 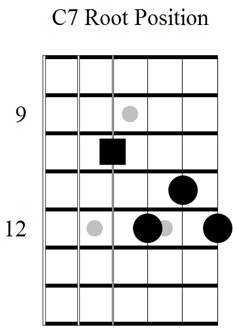 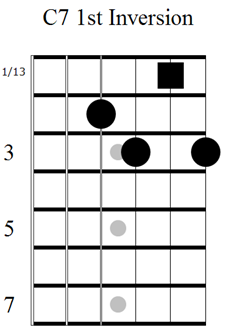 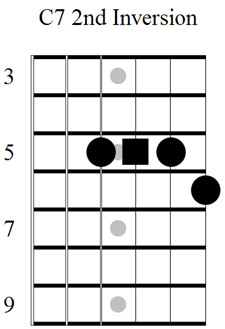 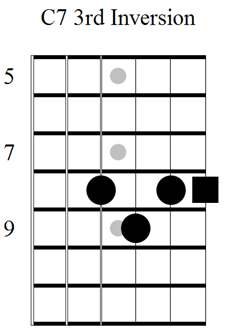 Playing these chords from low to high on the guitar neck gives us the following.

Repeat the steps in chapter two to memorise and use these voicings.

For the walking bass line I would suggest using the C Mixolydian Bebop scale below although this will change depending on context.

With a walking bass line, the four voicings of the C7 chord can be played in the following way:

Once again, using walking bass lines is quite tricky, but very effective. Begin by going very slowly and not worrying about playing in rhythm. As you improve, start using a metronome and focus more on playing in time.

When you are feeling more confident with the bass line connections, try playing the dominant 7 voicings with root notes of F, G, Bb and Eb.

The next stage is to learn the C7 voicings in a musical context. We can do this by combining them with the Fm7 voicings in the previous chapter.

The V – I progression is the most common chord movement in music. By linking the chords C7 and Fm7 together we will quickly master some of the most important chord movements on the guitar.

To begin with, find the voicings of C7 and Fm7 that are closest together on the guitar neck. These chord pairings can be seen in the following examples. 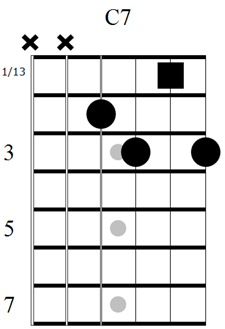 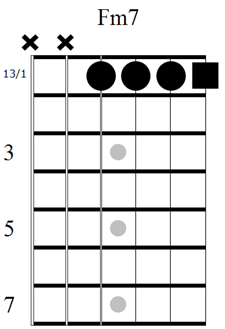 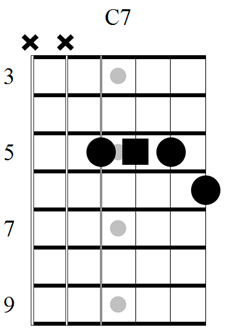 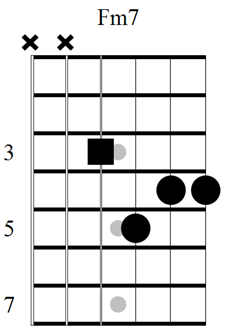 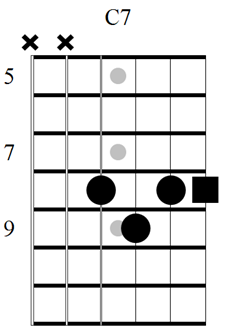 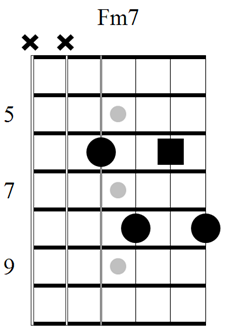 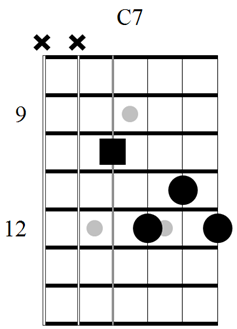 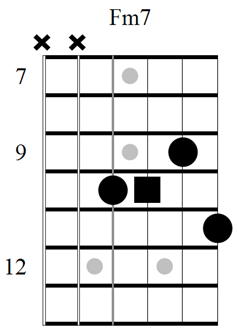 Try joining these chord sequences up into a longer line that ascends the neck.

Or descends the neck.

This time, instead of thinking in terms of closest chord pairs, ascend a voicing each time so that the melody note always raises in pitch where possible.

Finally, reverse this idea so that the melody always descends when possible.

You can practice all of the above examples over backing track three, a repeating C7 to Fm7 vamp.

As always, practice these ideas slowly and make sure you have completely memorised all four voicings of each drop 2 chord before trying them in different keys.

Play the ideas shown in examples 3i to 3l in the following keys.

Try taking these progressions through some of the exercises in chapter eighteen.

We have now looked at many ways to play through the minor V I progression using drop 2 chords on the top four strings. In the next chapter we will introduce chord ii in a minor key; the m7b5 chord. 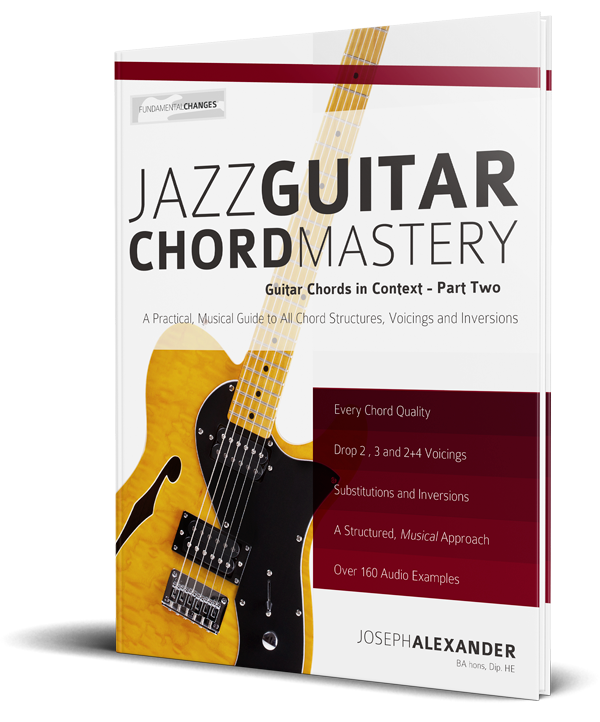