Today’s Eastern Pentatonic lesson is a part one of a special bonus chapter from the brand new book ‘Exotic Pentatonic Soloing‘.

Shown below is the ‘A major 7#11’ chord shape. It will also work fantas-tically well with the following licks and ideas. 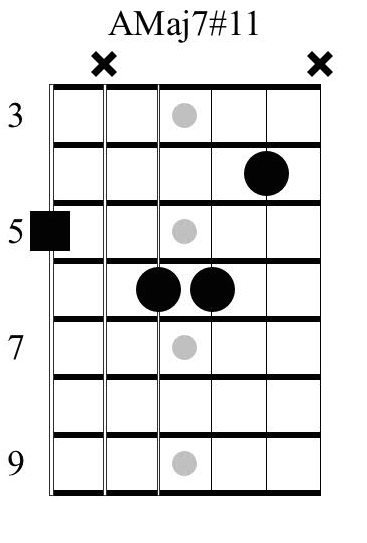 In example 14a, I have arranged a simple two-chord progression highlighting the main characteristics of the Raga Amritavarsini scale. The idea here is to let the open ‘A’ root note ring out through bars one and two, and if possible the ‘E’ to ring out through bars three and four. The dissonance comes between the notes of D# and E. These two intervals are only one fret apart, and that creates fantastic tension when they are played on different strings.

For extra funky value, try adding in mutes to this pattern, in place of the rests. This simple technique can transform an ordinary sounding rhythm part into a groove-based hook, capa-ble of becoming the centre of your song.

Example 14c incorporates both rhythm and lead guitar into a fun four-bar pattern. The lick centres around an ‘A major 7’ voicing ‘A C# G#’ and forms a nice sounding chord voicing, high up the neck.

The concept of ‘Chord soloing’ is not a new one. Jazz gui-tarists have been using this technique for years. It was made popular in rock circles by the master himself Jimi Hendrix in pieces such as the sublime ‘Little Wing’. Having the ability to play a chord and blend it with the corresponding scale, allows you to build extraordinary rhythm guitar parts. Never let it be said that rhythm playing is boring!

Check out Part Two of the Lesson Here

For more Eastern Pentatonic inspired licks , I recommend buying the album Inferno by Marty Friedman. My favourite track on that album being “In-ferno.”

Alright everyone, we’re into our final chapter here. Well done for getting this far, I really hope you’re enjoying it! In this chapter we’re looking at the Raga Amritavarsini, and it’s just as fun to play as that is to say.

It’s another one of the Eastern sounding pentatonics, our final one of these 3 chapters on Eastern Pentatonics. It sounds fantastic over the static root backing track that you’ve got to download by the fantastic Quist, who provided the backing tracks for this book. Let’s go and have a look and a chat at these 5 licks, just after this.

As I’ve said a few times in the book, I’m a massive fan of making chord shapes from scale diagrams, something that I don’t see too many guitarists doing. You take your scale dia-gram and just try and build little chord fragments. In Example 1 there you saw 2 chords, very similar to each other in terms of their fretting shapes, but creating different sounds.

Try and aim for minimal movement, copy my fingers moving there, just to keep that movement the same, and picking nice and gently there through the strings. Shouldn’t feel too difficult. Obviously, look at the tab in your book there as well to refer to as with all these examples. Let’s go and have a chat about Example 2.

So I’m sure there’s not too many people out there right now making funk parts out of the Raga Amritavarsini, but I like to be a little bit different, and I like to give you guys different things to work on as well.

This pattern is very much got a double stop funk pattern to it, but you can apply this double stop idea to any type of genre that you like to use here, really. Keep it consistent with this hand, your picking hand, and work on these little double stops. You can add bends, vibrato, slides, hammer-ons, pull-offs, to make them rocky, jazzy, whatever you’re looking to do, but use these as templates for all of your own ideas, licks, ticks and riffs. Let’s have a look at Example 3.

In this Example 3 around our Raga Amritavarsini (I’m getting fairly good at saying that now), we’re based around an A major 7-3 note little triad shape. We’ve got 12 on the A string, 11 on the D string, and 13 on the G string there, sort of every time in the 1stpart of this. Then we’re adding in a little bend on the D string, the major 7th to the root there (the 13th to 14th fret). We’ve got different slidey outy parts after that, and a little fun, little rhythmic pull-off idea as well, which is quite nice.

It gives you some different flavors. I’m a real fan of this lick actually; it’s become one of my practice regime licks from this book that have come up. Try and make your own little pat-terns with this, and of course this little 3-note triad shape, you can move about very easily. So here is an A, whack it back to the 7th fret, and then you’re an E on the same string, on the 5th string. Let’s go and have a look at Example 4.

There was our Example 4 lick here. I call this lick Mr. Slidey, a fairly obvious reason, or it could be Mrs. Slidey if you like. I’m not fussy. This one here is a little bit of a finger twister. Make sure you copy my fingers that you saw in the video just previously to this. Basically you’ve got your 1st finger on the 12th, on the 5th, sliding 13 to 14 on your middle – on the G string – then back 14-13 on the D (on your index), and then up on your 3rd finger 14-16, then a pull-off with your little finger, up with your ring finger once again 14-16, and then I go index, slide back 14-13 on the G, and then middle 14-13 on the D string. That might all sound a little bit jumbly, gobbledy-gook, but when you’re looking at the tab and working through the video, hopefully that’ll make a little more sense.

Make sure your slides are nice and little. We’re doing these 1 fret slides; it’s very easy to over slide that, so take that very gently. Just imagine – Use the word glissando if you like, another word for slide. That gliss term feels quote nice for these long smooth slide running licks. One more lick to go, let’s go for it.

I put together 2 of my favorite chords here in this Example 5 of our Raga Amritavarsini. We’ve got an A major 7, sharp 11 shape right there, which is really rather nice, which is nothing on the 6th, open, 6-6-4-4 (really sweet sound). And then bring in that bar all the way across to the 5th string in the 4th fret from just the top 2 up from the 5th string, to give C sharp sus 2. The sus 2 shape is one of my favorite chord sounds on the guitar. I think it sounds wicked in pop styles, rock styles. You can mix it up, it sounds really great. Picking pattern, quite familiar to this, you can make up your own of course, there’s no hard or fast rules, just try and follow my pattern at first to give you a start.

I really hope you enjoyed this book. It’s been a really fun time for me putting this together, and I really hope you get something from the videos. If you’ve enjoyed it, please share these videos with a friend. Obviously these videos are free for people who can’t afford to buy the book, and they still want to improve their playing. But if you can, of course, buy the book as well. That would be really helpful for me. Take care, I’ll see you next time. I’ve got some more stuff coming out soon, so make sure you check out Joseph’s web site fundamental-changes.com, check out my website SDPguitar.com, and my YouTube channel as well: SDPguitar, where I bring you loads more videos. Take care, any comments, leave them in the section below, and I’ll see you next time for way more free videos. See you soon.

HOW HARD IS LEARNING TO PLAY GUITAR?
Scroll to top