Chromatic approach notes are a massive part of the jazz guitar language.

Jazz language is mainly made up from arpeggios and ‘decorations’ to those arpeggios.

Remember the basic principle of jazz soloing; keep arpeggio tones on the beat, and non-arpeggio tones ­off the beat. If we consider what we learned in the previous chapter about chromatic passing notes, it is not unreasonable to suggest that we can place any chromatic note on an offbeat, so long as it resolves to an arpeggio tone on the beat.

This concept is a great starting point to explore some commonly used decorations to arpeggio based soloing. 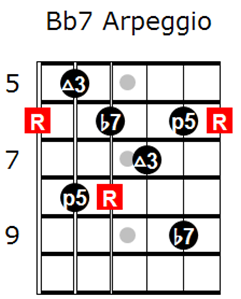 We are going to add a chromatic approach note a semitone below each of the arpeggio tones of Bb7.

Each chromatic note will be played on an offbeat and be one semitone below the target note.

Try the following exercise in your own time; don’t use a metronome and try to visualise each note of the Bb7 arpeggio as you play it.

In the following diagram, the notes of the Bb7 arpeggio are solid, and the chromatic approach notes are hollow. 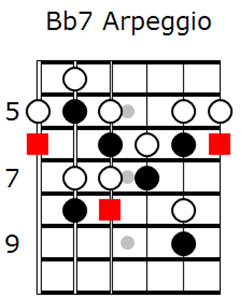 When you get confident, try playing the previous exercise as a continuous line as shown in example 8b:

Also learn this idea descending, as in example 8c:

Now apply the same idea to the Eb7 arpeggio. To save space I’ve written the following examples as 1/8th notes, but don’t be afraid to add lots of space between each note ‘pair’ so you can internalise this concept easily. This technique can be applied to any arpeggio, so it is wise to proceed slowly here and learn the sound carefully and fluently.

When I was first learning these concepts, the main difficulty I had was using them musically. I finally realised that they work best when not used in isolation. They tie in strongly with the idea of melodic voice leading over changing chords that we examined in chapter seven, and they can be used at any time as an approach into a target note of a new chord.

These patterns are also very useful and distinctive when added to arpeggio-based lines over static chords. I would highly recommend getting used to their sound and rhythmic placement over a one-chord vamp such as backing tracks three and four.

The following lines demonstrate the use of the ‘semitone below’ approach note pattern.

There are many other chromatic approach note patterns that are often used, but one that you should definitely work on is the semitone below / scale step above pattern.

As its name suggests, this pattern starts in a similar manner to the semitone below pattern described above, however, we now add in another note, this time from the scale appropriate to the chord (in this case, the Mixolydian mode)

One very interesting thing about this pattern is it allows us to put a chromatic tone on the beat, and it will sound fantastic, just so long as you resolve it correctly.

Example 8h shows you how to play the semitone below / scale step above pattern on the root of the Bb7 arpeggio.

As you can see, the note that is chromatic to the scale is now placed on the beat (although later you should experiment with the rhythmic placement of all of these ideas)

Once again, don’t worry about playing these patterns with a metronome or backing track at first. It is much more important that you learn them slowly and accurately. They’re a great way to test how well you really know these arpeggios, because you must visualise and hear the target note far in advance of actually playing it.

When you are getting to grips with this pattern, try to go through the whole arpeggio targeting one arpeggio note per bar over backing track three. It should sound something like example 8j:

Gradually increase the frequency of the approach note patterns, and experiment with the rhythms too. Repeat this process descending, and also for the Eb7 arpeggio shown in example 8k: (backing track four).

Try skipping intervals within the arpeggio too, for example, first target the root, then the 5th, then the 3rd and finally the b7th. Try any combination you can think of!

The following lines combine all of the different concepts covered so far in this book. They consist of arpeggios, bebop scales, target notes, chromatic passing notes and approach note patterns.

Lines moving from Bb7 to Eb7

To master jazz blues soloing, check out my book:

How to Play Classical Guitar Grace Notes
Scroll to top