The Art Of The Blues Guitar Turnaround (2)

Variations for the first part of the turnaround

Let’s start with taking a closer look at typical variation techniques for the first part of the turnaround.

Insert an octave jump up

A nice way to make the line less predictable is to insert an octave jump. Let’s start on the low A and play downwards to the V (E). For the second part we use the embellishment from above.

Now let’s add an octave jump up: Again we start on the low A, but then we walk down from G to E one octave higher:

Note: None of these versions is better or worse, they are just different.

Insert an octave jump down

Now we start on the low A and play upwards to the V (E). For the second part we use the embellishment from below.

Now we start the turnaround on the higher A and then continue the line one octave lower. For good measure I’ve thrown in a little rhythmic change: I played the second note syncopated, that is an eigth note before beat ‘2’. This is another typical embellishment for Blues turnarounds and endings.

Usually it’s best to insert the octave jump after the first note of the turnaround, the root.

Playing a steady note against the downward line

Another great idea is to play one of the basic Blues turnaround patterns we learned so far and play a steady note against it (usually the root).

This is the Robert Johnson signature lick. He played a variation of this in virtually every song he ever recorded, as an intro, a turnaround or an ending. (CD-Tipp: For the complete  recorded works of Robert Johnson with the best remastering available take a look at the 2011 double CD ‘The Centennial Collection’)

Playing a steady note against the downward line

The next example features the upward Blues turnaround line against a steady note. Note that this time the steady note is below the moving line. Also this one is in triplets.

I got this idea from Stevie Ray Vaughan (‘Tell Me’ from the CD ‘Texas Flood’).

Variations for the second part of the Blues turnaround

Now let’s add a variation to the second part of the Blues turnaround. A common technique to spice this part up is to harmonize the line with 7th chords. Let’s use an easy 3-note-voicing with the root, major third and minor seventh. (The chord on beat ‘1’ can be replaced with whatever note(s) the first part of the turnaround ends on. I just put it the E7 there as a placeholder.) 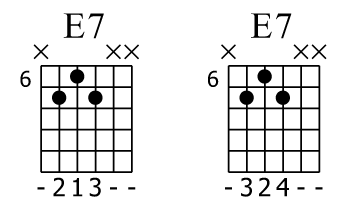 Now try to combine this new chord idea for the second part of the turnaround with all of the above ideas for the first part. Remember that the chord on beat ‘1’ is just a dummy.