In my rhythm column this week I thought we could look at a few chord shapes to try instead of stock power chords, to achieve more creative rock rhythm guitar.

Power chords have been the staple component to blues and rock guitar for decades. Power chords are simply composed of the root note and the fifth, missing out the third of the chord and thereby removing an major or minor tonality. When playing chords with overdrive or distortion the notes tend to mush together and loose clarity, and the more extended (7th 9th etc) the chord, the worse it gets. Power chords work so well because they contains just two very consonant notes so they remains clear (and in fact just sounds like a reinforced version of the root note).

For example many of Black Sabbath’s classic riffs (NIB, Sweet Leaf, Iron Man etc) could have been single note melodies but the use of the power chord just thickened it up giving the heavier sound.

As a rule fourths, fifth and octaves work well with distortion, and thirds and sixths tend to break up more easily. There is a very interesting physics explanation for why this is (if such things are your bag, can I recommend looking for a copy of Measured Tones: The Interplay of Physics and Music by Ian Johnson).

We will look beyond power chords and suggest some interesting alternatives to try out in your rock guitar playing. 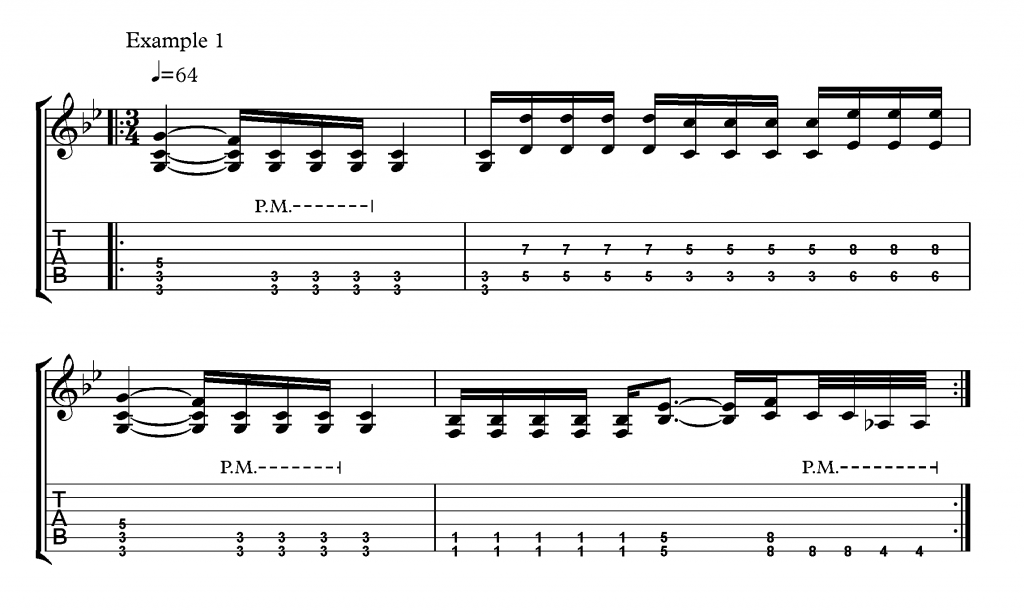 First, we are simply going to invert the power chord (inversions are simply reordering the notes in the chord) so now the fifth is lowest note in the chord rather than the root. The effect is that the sound is lower and heavier. If you want the lower sound, particularly when playing with a five string bass player, but don’t want to detune your guitar, this is a great short cut to bluffing detuned power chords. Be aggressive in your palm muting to get an authentically percussive attack. 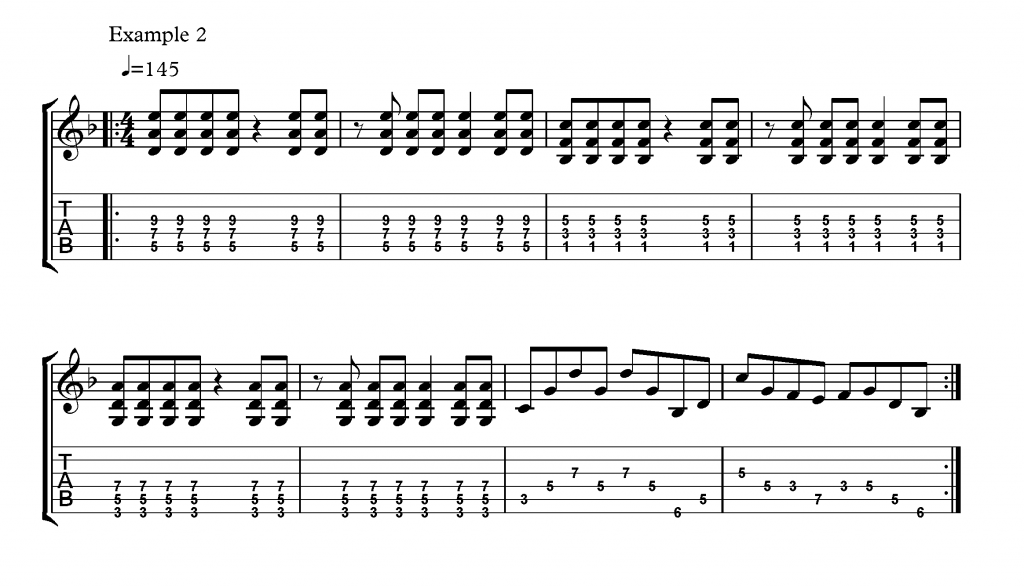 Secondly we have an ‘add9’ power chord. This is very popular in modern metal and progressive music and you can hear it in bands like Killswitch Engage and Dream Theater.

The chord works brilliantly because it is just two stacked fifths so reacts well to the distortion. It can be a bit of a stretch to execute at the bottom of the neck so be careful. Obviously a natural ninth isn’t going to work everywhere so use your ear and theory to tell you when it is a suitable substitution for standard power chords.

Every now and then rock and metal players do explore major keys! This last example is a great way to add to power chords where a major chord would fit. It doesn’t have a 3rd, but instead has a sixth which brightens the sound similarly. The intervals in the chord are a fifth and a second. This may result in overdrive becoming a little destructive, and I certainly wouldn’t recommend high distortion, in which case roll the volume down on your guitar slightly and the reduced output should mellow the amp’s gain. The riff features a mixture of different power chord variations that a band like Iron Maiden may employ to give melodic direction to a part, instead of just chugging through straight power chords.

Every player of note has spent time working on being a great rhythm player as well as the lead style they may be more famous for. Eddie Van Halen, John Petrucci (Dream Theater), Alex Lifeson (Rush) and many others all know how to make the band sound huge by careful chord selection and expanding their power chords when playing rhythm.

Please feel free to comment below with any topic you would request I cover in upcoming columns?