Last lesson looked into some relatively simple ways to expand upon the basic String Bending technique.  This week we push the envelope a little further to incorporate other techniques to use alongside the string bending to create interesting and individual phrases, with some more advanced string bending ideas. Click here if you want to check out Advanced String Bending part 1.

When bending, generally aim to bend the string through a circular twisting motion from the wrist, much like you were turning a door knob, rather than bending with individual fingers, which is both weak and risks injury to the tendons.

I found ideas like this in the playing of prog keyboard wizards Jordan Rudess and Rick Wakeman. The basic idea being to fret a note, and then quickly bend up to it from below. This idea is easy to execute with a keyboard’s pitch wheel, but on guitar requires a little strength to bend quickly and accurately after using the third or fourth finger to fret the first note. It makes for a great repeating lick shown here, before descending through a pentatonic based phrase to another semitone variation of the lick. 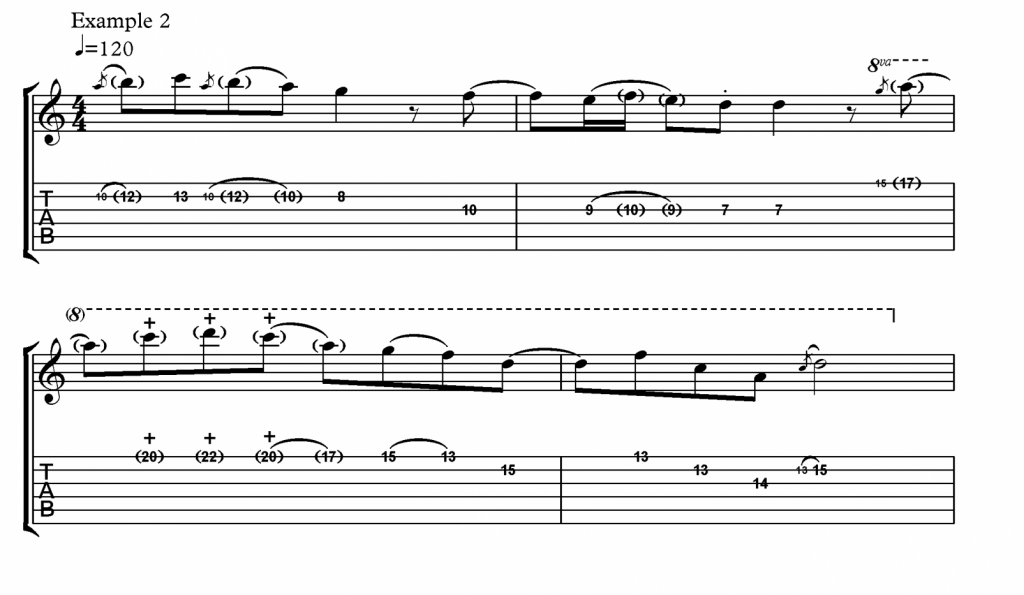 The famous bends in the Toto song Rosanna are a bend, then a higher note on the same string is fretted while the bend remains held. It is achieved by bending with the second finger, supported by the first, and using the third or fourth finger to fret the extra note. This simple device can add freshness to otherwise straightforward stepwise melodies. Shawn Lane also employs this idea in Get You Back from his Powers of Ten album, although rather than using spare fretting hand fingers he taps the note a semitone up from the bend with his picking hand.

I used this approach in the second bend here. I tapped the top two notes with fingers 2 and 3 on the picking hand but sliding with one finger sounds great too. Be aware that the tab indicates the actual pitches, not the actual fret numbers to be played.

A staple of country music and an evolution on the Hawaii style of slide playing – the pedal steel originally allowed players to alter the tuning of the open strings so as to get different chords with just the slide. However, the musical appeal of changing the tuning mid-note quickly caught on, and the polyphonic glissando pedal steel sound developed.

Here we attempt to replicate that on a regular guitar but bending one note and while letting it ring play other notes against it. Be sure to not mute the higher strings with the bending fingers and hold the tuning steady. Hybrid picking also helps with this lick, not only to enhance that country-twang, but also to keep the picking hand from muting the lower strings prematurely. Remember, the appeal of this lick is that you hear the notes simultaneously!

Country players have all manner of interesting string bends, and even developed a mechanism for otherwise impossible string bends, inspired by the pedal steel guitar called the ‘B Bender’.

If you have any questions about the material or would like to request a topic for a future article please comment below!