In this lesson, we are checking out three guitar licks in the style of the jazz King, Wes Montgomery. We are going to look at motifs, octaves and chord embellishments in this fantastic jazz-blues style. Wes was a master of rhythm, sound, technique and overall raised the bar for jazz guitarists worldwide. He has influenced countless guitarists that have followed him including George Benson, Pat Metheny, Pat Martino and many others. Make sure to watch the YouTube video to see how I play the examples demonstrated here.

In jazz, there are a lot of chord changes to solo over! The use of motifs or a series of notes put together in a melodic way is a standard improvisational tool used by almost all jazz guitarists. Wes Montgomery was a master at simple lead guitar lines that highlighted the underlying chord progression. In this example I have shown one of Montgomery’s favourite lines and have moved it between two different keys. The first two bars are based around Dm7 – G7 and use two different D minor arpeggios to show the changes. Note that the use of rests here is crucial to create the rhythmic time feel. Bars three and four use almost the same theme but are playing over the chords of Em7 – A7. By creating a motif that can be easily played over a chord sequence, you will be able to navigate your way through jazz standards melodically. Example one can be used to solo over the first four bars of the jazz standard Satin Doll. 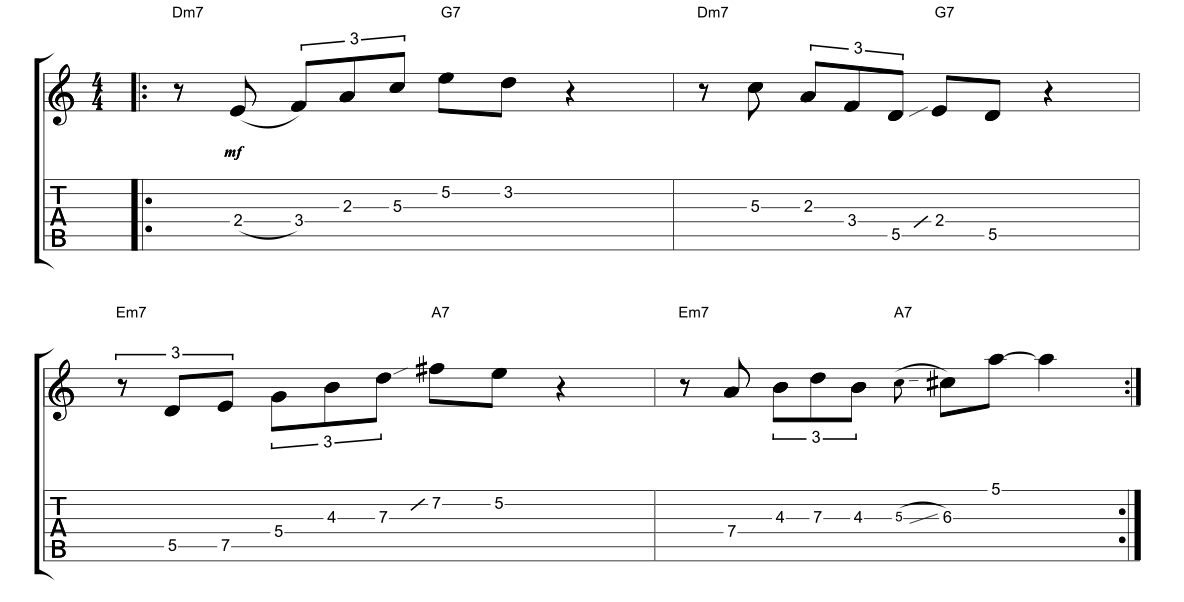 One of the things Wes was most famous for was his imaginative use of octaves. Example two demonstrates a very simple jazz theme using the E blues scale in octaves. Although Wes used his thumb to play single notes, octaves or chords, I opted to fingerpick this example.

Wes developed a structured way to approach most of his solos. He would start off with single note lines, move onto octaves and finish with chords. This is an incredibly fun way to approach your own jazz solos. His chordal soloing often uses lots of interesting chord voicings and moves around the neck fluidly. I have tried to capture the sound of that within example three. 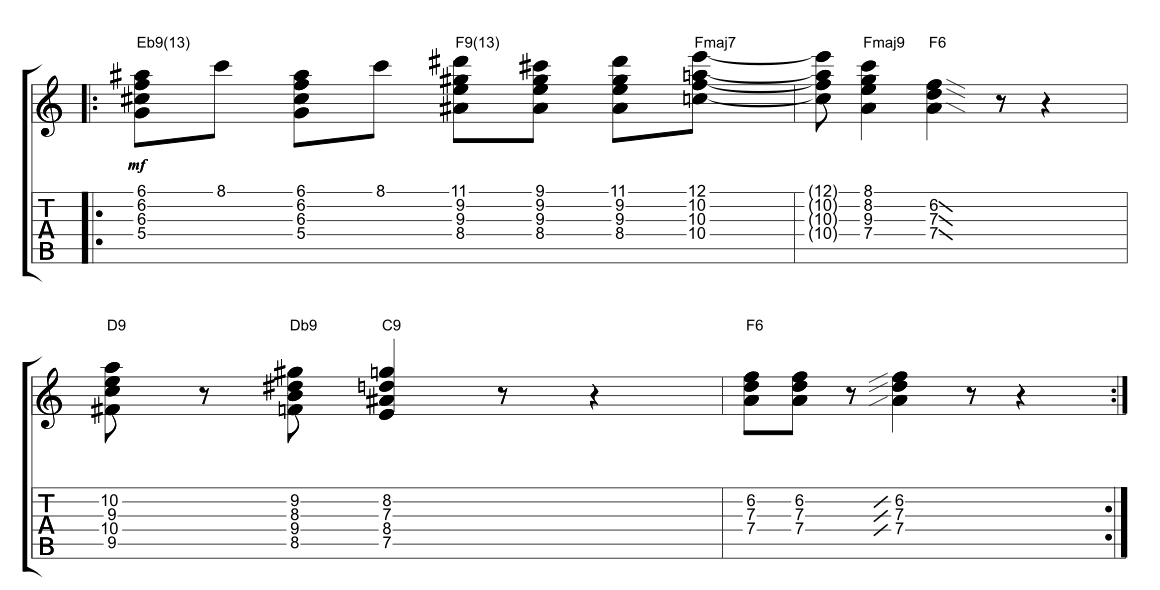 For classic Wes Montgomery style guitar licks, I recommend buying the album “Smokin’ At The Half Note.” My favourite track on that album being “Four On Six.”

Hey YouTube, Simon here once again for the amazing Fundamental Changes. Today we’re going to have a look at 3 licks in the style of the amazing Wes Montgomery. Let’s go and check those out, just after this.

Wes Montgomery was an absolute jazz guitar giant. He was doing things that people at the same time as him were just not able to do and hadn’t seen before. I love innovators like that. He inspired people like the wonderful George Benson, who I get to play the signature model. He inspired Pat Martino, Pat Metheny, loads and loads of guys who are now giants in their own regard as well.

We’re going to look at 3 things today that Wes Montgomery was famous for, obviously you could spend whole hours on YouTube or tons of times within a book discussing all of his techniques, but the three things I want to get across today are: motifs, octaves, and chord playing. In Example 1 there, we saw the idea of motif. Motif is a simple melodic phrase that can be used to navigate through a chord change. Now the chord changes that are happening underneath this motif are D minor 7 to G7 twice, and then E minor 7 to A7 twice, a very classic 2-5 pattern going round. This is the opening chord sequence to the famous jazz standard Satin Doll. What I used here was Wes Montgomery’s famous little arpeggio line that he liked to use in a lot of his solos, which is around D minor arpeggios for the first 2; and then he moves it up 2 frets into E minor – almost the same thing – and then ends with a little thing on the A major there where you slide up and create a little 6th idea.

What’s great about motifs is you can take on a jazz standard and move one little melodic phrase, so you can work your way all the way through the jazz standard without having to worry too much about scales and chords, and everything like that. What I recommend that you do is you make sure you learn this in these keys as I’ve shown you here. Wherever you see a 2-5 now in a progression going between a minor 7 and a dominant 7 and a major 2-5-1 progression, make sure you try out this Wes Montgomery motif in as many different keys as possible. Let’s have a look at octaves in Example 2.

Wes was famous for many things, but few things are more famous than his wonderful fantastic use of octave playing. The thing I love about octaves are they can be used in jazz, jazz blues funk, rock, pretty much any style of guitar playing that you might be into. Even if you’re not the biggest jazz guy, you can take on these octave ideas and use them in your rock playing as well. This example here uses an E blues scale, a very, very simple idea. Wes would use his thumb for all this; this is what he’s famous for using. He’d use the underside of his thumb, and he’d brush the strings. That’s a technique you can try out. It’s not something I do hugely in my own playing, so I opted to fingerpick this. You could hybrid pick it with a plectrum and a middle finger, probably, or you could just use a straight plectrum and strum it.

There’s many ways to play octaves. You’ve got to find your own niche groove on how you want to put those together. Very simple E blues line here, but try it out with distortion and other lines as well. Let’s go and have a look at a little chord melody line.

The way the Wes Montgomery would usually – not always, but often – construct his solos, is he’d have single note lines, octaves, chords, and chord melody. Now this is something that’s really cool for you jazz guys, you jazz blues guys. You can start to create solos with a bit of variation-ing. Often we live in single note land, we don’t vary it much, but even if you alternate between going single notes and double stops, or octaves, or octaves and then single notes and double stops, and then single notes, you can start to bring in different flavors into your improvisational style. The chord sequence we’ve got here is very classic of the kind of chords that Wes Montgomery liked to use. You’ve got dominant chords; you’ve got voicings, and major 7s, 6s, and some more dominant 9-type things on the end there. There’s a very, very small snippet of the type of thing that Wes would do by creating almost a little melody line and moving chords up and down the fret board.

Make sure you look at the full article with the tab as well. You can see all the chords written out above the tab there as well. This is a very brief introduction into the wonderful playing of Wes Montgomery. As I say to all my students, I highly recommend that as you’re getting into this style, you make sure you listen toas much as Wes as possible. I’ve given some recommendations of CDs to listen to and songs I particularly enjoy. I recently transcribed the solo Satin Doll, which is where the original one came from. I highly recommend –if you’re up to it – to transcribing a few of his licks. Slow them down, really, really slowly, and just try and pick them up by ear, and then you’ll never forget them.

Hope you’ve got something from this Wes Montgomery lesson. Please like, share, comment and subscribe. If there are specific videos that you want to see, let us know because Joseph and I read all your comments. Take care, speak to you soon.

Hi everyone, hope you got something from this lesson of Wes Montgomery. As always, make sure you go and check out Joseph’s website fundamental-changes.com for hundreds of free lessons. Check out my book Exotic Pentatonic Soloing for Guitar, link in the description, and subscribe here, as we’ll bring you videos every week. Take care, see you soon.