In today’s lesson, we’ll look at four easy steps that you can take in order to build a cool-sounding walking basslines on guitar, and that you can apply to any tune you know or are working on in the practice room.

For more information on basslines, check out my free series of “How to Play Walking Basslines on Guitar” lessons.

The first step to working out some walking basslines on guitar is to put the root of the chord on the first beat of each bar in the progression.

Here is an example of this over the first four bars of an A blues, which we’ll use for each example in this lesson.

After you have worked out these roots over the first four bars, take this idea to the rest of the A Jazz Blues progression until you can play each root on the 6th or 5th string from memory.

Keeping these notes on the lowest two strings will allow you to add chords on top of these notes, as we’ll see later in this lesson, as well as give your basslines a nice, bassy timbre on the guitar.

With the root for each note under your fingers, the next step is to add a chromatic approach note on beat four of each bar, leading to the root that falls on the next downbeat.

There are two ways you can approach the root chromatically, by playing a 1/2 step above that root, or a 1/2 step below that root.

Here is an example of both of those approaches applied to the first four bars of an A blues progression.

Again, learn this approach over the first four bars, then take it to the entire A jazz blues progression as you expand on this idea in the woodshed.

The next step is to add a second chromatic note on beat three of the bar.

You now have two options when adding this note, you can either place one more chromatic note below  or above the note on beat four of the bar, creating two consecutive chromatic notes approaching the next root.

Here is an example of these ideas over the first four bars of a blues in A.

To help you out, here is a quick reference guide for the different two-note chromatic approaches you can take to the next root note, in this case targeting the note A.

As you can see, with just these four variations, you can now create endless combinations of approach notes over any bassline that you are walking on a blues or jazz standard chord progression.

The last step in the process is to place a diatonic note, a note from the underlying scale or arpeggio, on beat two of each bar. With this note added, you now have some complete walking basslines on guitar, which you can see written out over the first four bars of an A blues progression.

Again, start by learning this pattern over the first four bars of an A blues, and then take these concepts to the entire A blues progression in order to build and play your first, full walking bassline in this style.

Apart from walking a bassline on guitar, we are lucky enough to also be able to add chords on top of these bass notes to walk and comp at the same time.

Here is an example of how to do this over the first four bars of an A blues. I tend to add the chords on top of the root on beat one of each bar, as we usually know root-position chords better than inversions. But, if you want to explore this idea further, try adding chords under other notes in the bassline as well.

To finish things off, here is a sample study over an A blues that uses walking basslines on guitar built with the 4 steps listed above. Start by working this study slowly with a metronome, and then when it’s comfortable, take these ideas to other keys for the jazz blues, or to any jazz standard that you know or are working on in the practice room.

Listen to this study first: 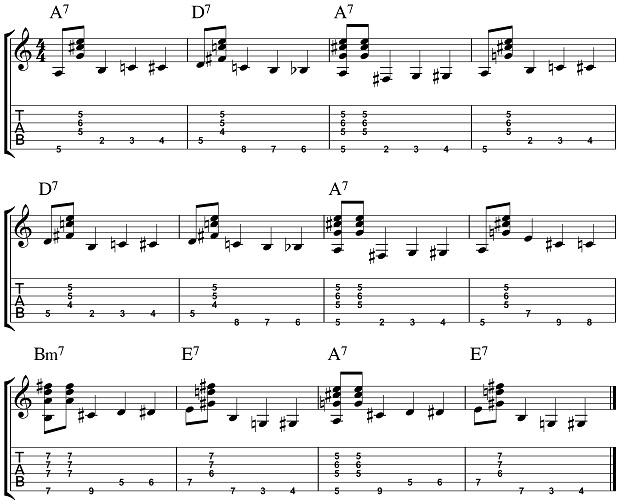 As you can see, with a little work and 4 easy steps, you can be on your way to walking a bassline on the guitar in no time.

Do you have any questions or comments about this lesson? Post your thoughts in the COMMENTS section below.

Matt Warnock is the owner of mattwarnockguitar.com, a free website that provides hundreds of lessons and resources designed to help guitarists of all experience levels meet their practice and performance goals. Matt lives in the UK, where he is a lecturer in Popular Music Performance at the University of Chester and an examiner for the London College of Music (Registry of Guitar Tutors).