As guitarists, we know how important it is to have a secure and varied vocabulary of chord voicings under our fingers in order to make the gig, come up with a cool reharmonization or write an interesting chord progression for our next song.Today’s lesson will dramatically advance your jazz chord playing.

While we know that it is important to have a strong command of harmony on the guitar, we often don’t know where to start, or feel that we need to learn a ton of hard to play and tricky chord fingerings in order to accomplish this goal in our chord playing.

But that is not the case. Often we only need to tweak chords we already know in order to drastically expand our chord vocabulary, and bring cool-sounding and fun chord shapes into our playing, providing us with the maximum results with the minimal effort in the practice room.

These three chords, Sus2, Sus4 and Sus6, are fun sounding and important shapes that we should all have under our fingers, so let’s take a look at a quick and easy way to get these shapes under your fingers in all inversions and keys around the fretboard.

The first note that we can alter in the major triad is the root, by replacing it with the 2nd note of the scale and then bringing it back to the root in the second half of the bar.

When doing so, notice how the “suspended” sound of the 2nd note, when it replaces the root, creates an open-sounding chord that then resolves to the more familiar sound of the major triad when you bring the root back into the voicing.

Working on playing sus2 chords, and resolving them to major triads, will not only give you 3 new chord voicings to play with, Sus2 chord in 3 inversions, but you will learn about voice leading and how to use sus chords to create and release tension in your chord playing at the same time.

Work out the following fingerings in all 12 keys, and bring them to different string sets and grips for major triads across the neck in order to get the most out of these chord shapes in the practice room.

You can also expand your chord knowledge, and develop your sense of creating tension and release in your comping, by replacing the 3rd in any major triad with the 4th note of the key, creating a sus4 chord in the process.

This is probably the most common suspended chord that people check out when learning guitar, the sus4 chord. So, it might sound more familiar to your ears than the other two shapes in this lesson.

While you may have played and heard this chord before, you might not have worked it around the neck in all inversions of major triads, and in all 12 keys, and so make sure not to skip over the sus4 chord in your practice routine because it sounds familiar.

Instead, use this opportunity to expand a familiar sound, the sus4 chord, to other keys and parts of the neck in order to develop a complete understanding of this common and im-portant guitar chord.

The last suspended chord we will explore is a Sus6 chord, or where you replace the 5th of each major triad with the 6th note of that key.

This is the least-used sus chord of the 3 we explored in today’s lesson, but it is an important sound to have under your fingers and in your ears nonetheless, as it can add a new sound and chord quality to your song writing, chord melody, chord playing and comping lines.

Again, work the example fingerings below in the given key, before taking them to all 12 keys and to different major triad fingerings around the neck to get the most of these shapes in your guitar practice routine.

To help you work these suspended chords around the entire neck, and in all inversions, here are 12 different F major triad shapes played in all 3 inversions and across 4 different string sets across the neck.

Take one group of triads, say the 3 on the 6-5-4 string set, and work all 3 suspended chords through those 3 triads in 12 keys first, then move on to the next string set, and the next etc. in order to slowly and surely cover all of these important shapes in your weekly guitar prac-tice routine. 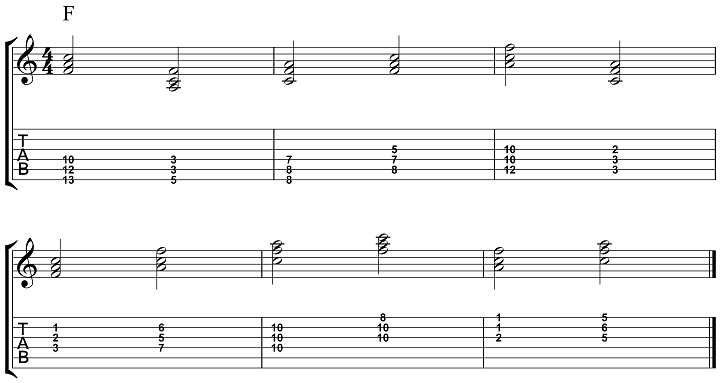 Most of us have checked out triads in one shape or another during our development as gui-tarists, but many of us stop with just the root position of each chord, or at the most we check out a few inversions on one string set and move on.

Learning to build the 3 different suspended voicings in this lesson will not only expand your chord vocabulary without learning anything new, beyond the easy-to-play major triads pre-sented in this lesson, but it will help you see major triads and their inversions all over the neck in 12 keys at the same time.

A win-win practice room endeavor if I ever saw one.

Do you have a question or comment about this lesson? Post it in the comments section be-low.

Matt Warnock is the owner of mattwarnockguitar.com, and the author of the 30 Days to Better Jazz Guitar eBook. Matt lives in the UK, where he is a Lecturer at the University of Chester and an examiner for the London College of Music (Registry of Guitar Tutors).

Twelve Bar Blues Chords for Guitar – A Beginner Guide
Hi, we use cookies to make this website better. For the best experience, please accept cookies. We will never sell your data to third parties.I AcceptNo CookiesPrivacy policy
Revoke cookies
Scroll to top