In this chord tones lesson we will learn to target the notes in each individual chord of the 12-bar blues progression and adjust our soloing approach slightly for each one. By targeting the specific chord tones contained in each chord we break out of the box of minor pentatonic playing and bring emotion, articulation and some great-sounding note choices to our blues guitar solos.

We will continue with our study of the blues in the key of A, and begin by examining the first significant chord change in the blues progression. This chord change is from chord I (A7) to chord IV (D7) and occurs in bar five.

To refresh your memory, here is the 12 bar blues progression in the key of A: 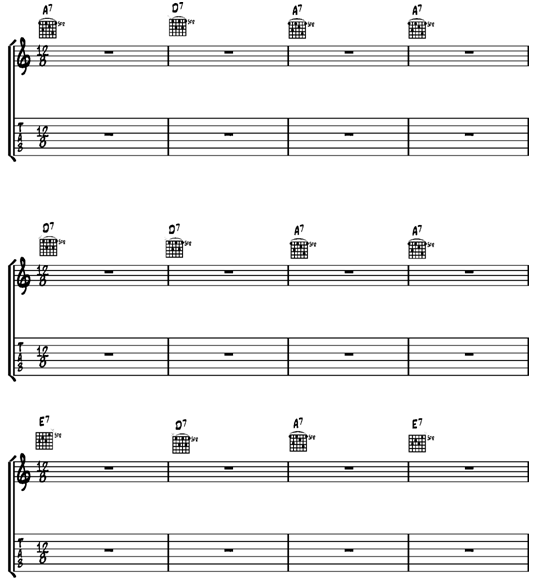 Although there is often a change from A7 to D7 in the first two bars of the blues progression, the point where the listener first really feels the change to the IV chord (D7) is in bar five.

Let’s pay careful attention to the actual notes contained in the chords of A7 and D7, and more specifically how these notes move when the chords change. With this knowledge we use our solo to target the notes that are altering in order to melodically highlight the subtle changes in the harmony.

This concept can be seen in the following diagram: 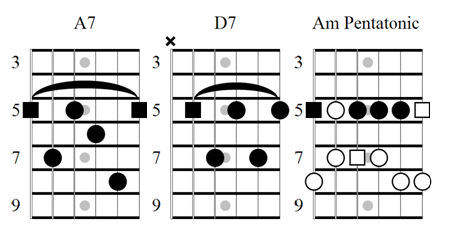 Compare the notes in the diagram of A7 to the ones in D7. Pay particular attention to the following:

The notes that are changing between the chords of A7 and D7 are called guide tones or ‘chord tones’ and they are the secret to melodically outlining any chord change in a solo.

I like to keep theory to a minimum, but for a broader understanding of this subject it is important to know that guide tones are always the 3rd and 7th intervals of any chord. The 3rd and 7th in a chord are the notes that define a chord. They are much more important than even the root when it comes to describing the character of the chord sound.

Unfortunately I don’t have space for a detailed discussion of the music theory here; you may wish to read my book The Practical Guide to Modern Music Theory for Guitarists for greater insight into chord construction, guide tones and arpeggios.

As a quick explanation: To outline or “musically describe” a chord in a solo we can play some of its arpeggio notes (an arpeggio is simply the notes of a chord played one at a time), but the most powerful and descriptive notes to target are always the 3rd and 7th.

The notes in the chord and arpeggio of A7 are:

The notes contained in the chord and arpeggio of D7 are:

so the strongest notes to target in D7 are F# and C.

While the 3rd and 7th of the chord are the strongest notes to target, any arpeggio tone when played at the right time will help to define the chord change.

What we’re really interested in however, is which notes are changing when the chords change.

Until this point, when playing a blues solo you have probably been using only the A minor pentatonic scale to solo over the D7 chord. There is nothing wrong with this at all, it is fairly easy to make it sound great, but let’s take a deeper look and compare the notes of the D7 chord to the notes of the A minor pentatonic scale: 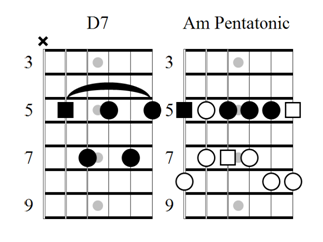 The G was however, contained in the A7 chord – it is the important b7 guide tone.

The F# (3rd of the D7 chord) is an important guide tone in the chord of D7 (it is the 3rd) and is essential in defining the D7 sound.

If we want to outline the chord of D7 in our solo, we simply target this guide tone.

When we drop the note G by a semitone to target the F#chord tone as the chord changes to D7 we introduce a new note to the solo and also outline the D7 chord.

Listen first, and then play the following line along with backing track one.

You can practice all the ideas in this chapter with Backing Track 1.

Notice how the last note in bar three descends by a semitone to land on the F# and how this deliberate note choice highlights and strengthens the D7 sound.

This kind of melodic movement is so strong that you can even ‘force’ your listener to hear the chord change when there is no band or backing track playing. Try playing the lick unaccompanied and see if you trick your ears into hearing the chord tones change the chord.

This type of chord tones targeting is a powerful tool, and by learning how to use this technique on any chord change we can create emotive and articulate solos.

The reason this sound is so strong is because we have not, up until this point heard the note F# in the melody.

Also realise that as long as we ‘hit’ the 3rd of the D7 chord when the chord changes, there is no reason that we have to approach this note from above. This is shown in Example 1b:

In example 1b we target the 3rd of the D7 chord with a slide from below.

Here are a few more lines to help you start targeting the 3rd of the D7 chord on the 2nd string:

In example 1d I delay hitting the F# until later in the bar. Using this kind of space lends a bit more subtlety than playing the guide tone on the first beat of the bar.

The 3rd chord tone of D7 can also be targeted in the lower octave. This is a little harder to see but if we examine the arpeggios of A7 and D7 it becomes more clear how we can articulate this change.

Remember, an arpeggio or is simply the notes of a chord played in sequence. Here are the arpeggios for A7 and D7 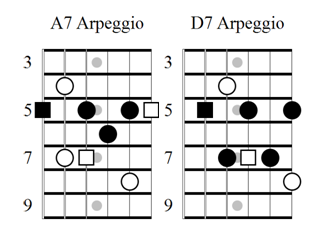 Here is a simple idea to highlight this change in the lower octave:

As with example 1a, example 1e lands directly on the major 3rd of D7 on beat one. See how many ways you can find to target the 3rd chord tones as the chord changes to D7.

Landing on a chord tone note on beat one, and immediately stopping the melodic line can often sound a bit obvious. The following ideas build some ‘melodic momentum’ throughout the chord change. You will see that once you have targeted the 3rd of D7 it is easy to continue with an A minor pentatonic idea over the D7 chord.

In the next lesson, we will look at how to return to chord I from chord IV in bars three and seven.

How to Whitelist Your Emails
Scroll to top