Target Chord I in Blues Guitar

This guitar lesson teaches you how to articulate your blues guitar solos and target chord I.

In the previous lesson we learnt how we could target the important notes of a D7 chord in the blues to help articulate our solo.

When the chord changes from D7 back to A7 in bar 7 of the blues form, we can use the information we already know to outline the A7 chord. We just have to reverse the process. 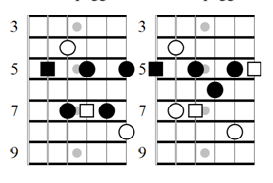 The following example demonstrates the movement from the b7 of D7 to the 3rd of A7:

Target Chord I Example 2a:

Example 2a highlights a typical line that uses the A minor pentatonic scale on the D7 chord, but then targets the 3rd of the A7 chord.

All the lines in the chapter can be practiced along with Backing Track 2.

Target Chord I Example 2b:

Example 2b is a similar idea, but this time by ‘bouncing’ off the 3rd of A7 I create a bit of forward movement in my solo.

Example 2c shows that instead of overtly landing on the major 3rd of the A7 chord, we can target the chord change with a bend for a slightly more subtle approach.

The line in example 2d adds a lot of forward motion to the solo over the chord change using a combination of the targeted 3rd (C#) and the A minor pentatonic scale. Notice that I slide into the lower octave of the 3rd on the final note (5th string, 4th fret).

This final example targeting the C# shows that you do not have to approach the target note ‘by step’. Here the melody ‘leaps’ to the 3rd of A7 from the 2nd string before continuing the line.

When you have got the sound of these lines into your ears, try targeting C#s in the lower and higher octaves as the chords change. You can do this on the 5th and 1st strings.

Now let’s target the b7 of the A7 as the chords change. This is a great effect but is a little more subtle because you have probably already heard the b7 note in the previous bar.

The following lines all demonstrate ways to target the b7 of the A7 chord.

In example 2f I approach the major 3rd of the D7 chord on beat 4 and then hit the b7 of A7 on beat one of the second bar. The line continues and targets the 3rd of A7 with a semitone bend before resting on the root

Example 2g targets the b7 of the A7 chord in the higher octave on the 2nd string. The final note of bar one is the 3rd of D7 which resolves up by step into the b7 of A7.

Example 2h is a repeating figure which targets the 3rd of D7 using bends in bar one before hitting the higher octave of the b7 note in bar two.

Target Chord I Example 2i:

Example 2i is a little jazzier and includes a leap from the b7 to the 3rd on A7.

Example 2j begins with a bend using theD Mixolydian mode and targets the b7 of A7 with another bend from the 3rd of D7 in the higher octave. We will discuss the mixolydian mode in a later chapter.

As always, these ideas are just to give you some idea of what is possible with target notes. You will get the most immediate musical benefit by memorising some a few of these ideas and then incorporating them into your own spontaneous improvisations.

Try bringing these ideas into your playing while jamming with backing track one. Once you have learned the movement on the fretboard, try to forget the theory and think about these lines as shapes and sounds.

It’s useful to play these ideas in other keys. Try moving these licks to the keys of E, C and G.

You can learn much more about articulate blues soloing in my book: Beyond Pentatonics, available on Amazon