Before launching into this deep analysis of the Mixolydian Mode for guitar, please make sure that you have read the primer article, How to Dissect Modes for Guitar

Mixolydian is built on the 5th degree of the major scale and is one of the most commonly used modes in modern guitar playing. It is used to construct chord sequences and solos in a variety of musical styles. The Mixolydian mode, just like Lydian, contains only one note that is different from the major scale, but that small difference creates a very different feel. Mixolydian is in the roots of modern blues, rock, and funk.

It can be heard in a wide variety of popular music:

Sweet Child of Mine – Guns and Roses

The formula for the Mixolydian mode is

It is played like this in the key of A: 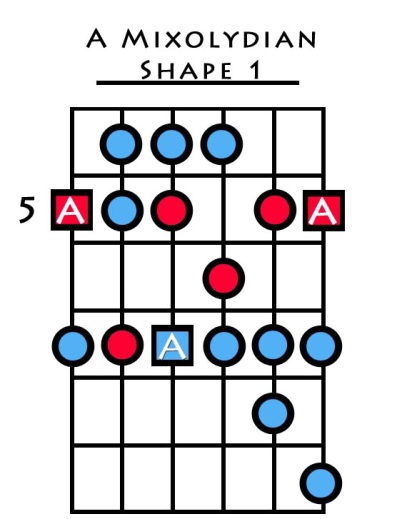 You should visualise the Mixolydian mode around the Dominant 7 chord highlighted in red.

Mixolydian is harmonised to generate the following sequence of chords:

One of the most important things to know about the Mixolydian mode is that the tonic, (Chord I) forms a Dominant 7 (7) chord when it is harmonised to 4 notes. In traditional classical music this is always seen as a point of tension which would need to be resolved, however over about the last 100 years, the dominant chord has been accepted as a chord that can remain static indefinitely. For example, the first four bars of a blues may often be played as a dominant 7 chord, before moving to chord IV which is also played as a ‘7’ chord. More often than not, the V chord is played as a ‘7’ chord too. This idea can be seen in the following section.

A quick way to spot a Mixolydian riff is to see if it plays a bVII major chord at any point. If the riff is major sounding and it contains a bVII chord it is generally Mixolydian.

Now continue on to discover 5 new licks and how to use intervals and triads to spice up your Mixolydian mode playing in part 2.