Stevie Ray Vaughan was born on October 1954 in Dallas, Texas. Inspired initially by his older brother Jimmie’s guitar playing,Vaughan received his first instrument at the age of 10, a plastic Sears model. With a natural ear for music and an obsession for blues guitar, Vaughan quickly taught himself to play.By the time he was attending high school hewas already performing around the Dallas club circuit.

With few academic aspirations, Vaughan struggled at school, andafter a short enrolment on an alternative arts program he soon dropped out of education. He subsequently moved to Austin in Texas to concentrate on making a living as a musician. Initially earning a steady income was a problem and Vaughan survived by collecting soda and beer bottles for cash while staying at friends’ houses. He spent all his spare time playing music, honing his guitar skills and working with the numerous bands that played in the Austin area.

In 1975, Vaughan and other local musicians formed the group Triple Threat. After some line-up changes, the band was renamed Double Trouble, inspired by the Otis Rush song. With Vaughan playing guitar and now singing, the group developed a strong following throughout Texas. By this time, Vaughan’s dynamic blues guitar playing was a major attraction for his audiences.

In 1982, Double Trouble caught the attention of Mick Jaggerwho invited them to play at a party in New York. In the same year, Double Trouble performed at the Montreux Blues & Jazz Festival to a mixed reaction.

While in Switzerland, Vaughan’s guitar prowess caught the attention of David Bowie, who asked him to play on his upcoming album, Let’s Dance. The combination of Vaughan’s blues guitar and Bowie’s voice proved a commercial success, although despite a lucrative offer to tour with Bowie, Vaughan elected to remain with Double Trouble. Vaughan and his bandmates were quickly signed to Epic Records, where they were mentored by the legendary musician and producer, John Hammond, Sr.

Double Trouble’s debut album, Texas Floodwas surprisingly successful for a blues album and reached No. 38 in the album charts,attracting the attention of rock radio stations across the US. Vaughan was also voted Best New Talent and Best Electric Blues Guitarist in the 1983 readers’ poll by Guitar Player Magazine. Double Trouble set off on a successful tour and recorded a second album, Couldn’t Stand the Weather, which climbed to No. 31 on the charts andeventually turned gold in 1985.

More commercial success followed with recordings and tours that culminated in several Grammy nominations andVaughan being named both Entertainer of the Year, and Blues Instrumentalist of the Year by The National Blues Foundation in 1985. He was the first white musician to receive both honours.

Despite the musical successes, Vaughan’s personal life suffered from his relentless touring and recording schedule. His marriage fell apart and he battledserious drug and alcohol problems. Following a collapse on tour in Europe in 1986, Vaughan checked himself into a rehabilitation centre. He stayed away from the musical spotlight for about a year to recover and in 1988 he and Double Trouble started performing again.In June 1989, the trio released their fourth studio album, In Step.

In the spring of 1990, Vaughan and his brother Jimmie began to work on an album scheduled for that fall. Family Style was scheduled for October, but sadly Vaughan didn’t live to see it.

On August 26, 1990, after a show in Wisconsin, Vaughan left the venue on a helicopter bound for Chicago. Due to heavy fog, the helicopter crashed into a ski hill just after take-off killing everyone on board. Vaughan was buried at Laurel Land Memorial Park in South Dallas and more than 1,500 people attended his memorial service.

Stevie Ray Vaughan’s guitar style was heavily influenced by many of the blues and rock greats, most notably Albert King and Jimi Hendrix. Vaughan had a strong left-hand vibrato and great skill with string bending. Primarily favouring Minor and Major Pentatonics and The Blues scales, he also displayed a sophisticated knowledge of jazz chord voicings.

Vaughan was closely associated with the Fender Stratocaster guitar and he owned many of them throughout his career, his favourite being a 1959 model he named Number One. He strung his guitars with extremely heavy-gauge strings and tuned down a half-step to facilitate easier string bending.

He generally favoured tube amplifiers such as the Fender Super Reverb and Vibrolux, although at times he recorded with Marshall and Dumble amplifiers too. For effects, he used an early model Ibanez Tube Screamer and a WahWah pedal, but did also experiment with other effects such as Leslie speakers.

These licks are written in the key of E.

The first Stevie Ray Vaughan lick begins with the blues cliché that ends in typical Stevie fashion. The trick is to really lock in with the triplet feel of the backing track. The bends moving into bar two are different distances; the first a full tone, the second a blues curl on the minor 3rd.

Stevie often combined large slow bends with faster hammer-on and pull-off phrases to create movement in his solo, and this is what we’ve shown in bar two. Use your first and third fingers throughout the final two bars, moving up to the second position of the Minor Pentatonic scale in bar three.

Vibrato is a huge part of Stevie Ray Vaughan’s sound, so add as much as you can on any sustained note.

Stevie normally tuned his whole guitar down a semitone to Eb and played many open-string licks. The combination of heavy-gauge open strings and the lowered Eb tuning contributed a great deal to his thick, sonorous tone.

Example 18b combines a sliding figure that’s based on an E7 chord fragment with open strings and pull-offs. Use your second finger to slide hard into the first note of each bar ensuring that the notes and triplet rhythms are accentuated. Lines like this can easily turn into mush if you’re not careful. Listen to the track to get the timing of the last few notes of bar two.

In bar three, the curl on the low G is a classic Stevie Ray Vaughan move, as are the E7#9 chord fragments at the end of the phrase.

Begin in the pickup bar by sliding in with your second finger. Notice that the E note is played twice, first on a fretted note and then on the open string. Texas blues players often use this technique to create tonal variation.

Play the 1/16th note phrase in bar two with your first and second fingers. Pick hard on the first note before hammering the 3rd fret and pulling off successive notes down to the open string. Accent the note on the fourth string before playing the curl on the sixth and let the rest of the phrase ring.

For 100 Authentic “In the Style of” Licks, check out my new book: 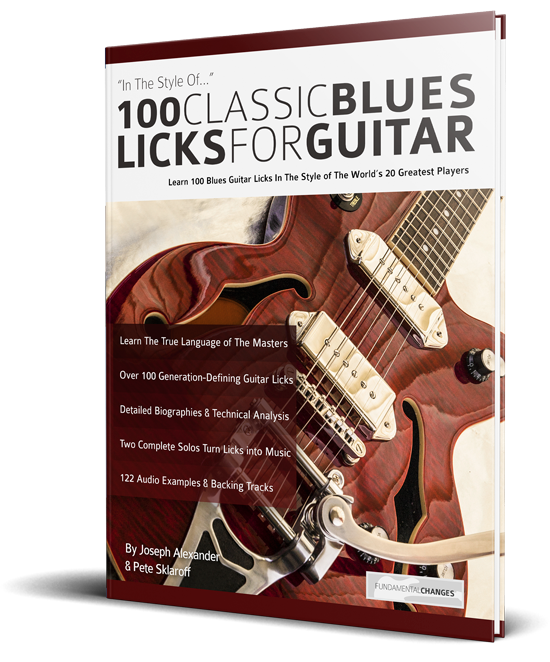