Today you’ll learn how to use guitar fills and power chords. This lesson is taken from my new book – Beyond Rhythm Guitar

In this lesson, I will show you how to build awesome rock progressions that use two-note power chords. When written in a chord, a ‘5’ dictates that it is a power chord. Power chords can be used in place of both Major and Minor chords. For example, both a D Minor or D Major could be replaced by a D5 power chord.

You will use a D Minor Pentatonic scale between the chords to create mini fills and licks.

Like all chords on the guitar, there are multiple ways that power chords can be played. Shown in example 7a is the D5 power chord shape with a root on the E, A, and D strings. Let’s dive in!

Chords and Fills Example one

Example 7e demonstrates the D Minor Pentatonic scale, which will be used for the fills in the rest of this chapter.

By adding a note between each of the chords we can create a‘call and response’ pattern. The power chords call out and the note of F responds.

This example alternates between a pull-off and a hammer-on pattern.

Example 7j shows aslide example with the fills on the G and B strings.

Bends are a rock staple! Adding them into this sequence sounds awesome. If you want more information on all types of bends be sure to check out my book Melodic Rock Soloing for Guitar.

You can check out my new book Beyond Rhythm Guitar by clicking the following link: 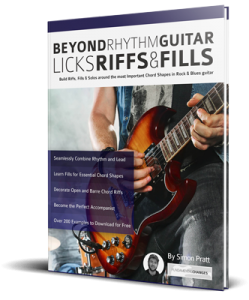