After looking at vibrato in the first instalment of this series, I’m now going to look at string bending, both from a technical perspective and how to use it to decorate and enhance a melody. The aim of this mini series is to help you to play more expressively and, broadly speaking, anything that can bring the sound of your guitar closer to the inflections of a human voice will imbue expression to the melodies you play. Vibrato keeps a sustained note interesting and ‘alive’ rather than being a static tone, and similarly bending from one note to the next rather than moving from one discrete tone to the next.

For more information on developing a good bending technique check out this lesson, but to summarise, the movement should come from the forearm muscles with the fingers locked in place. Imagine you were twisting a doorknob and it should be the same motion for a strong string bending technique. 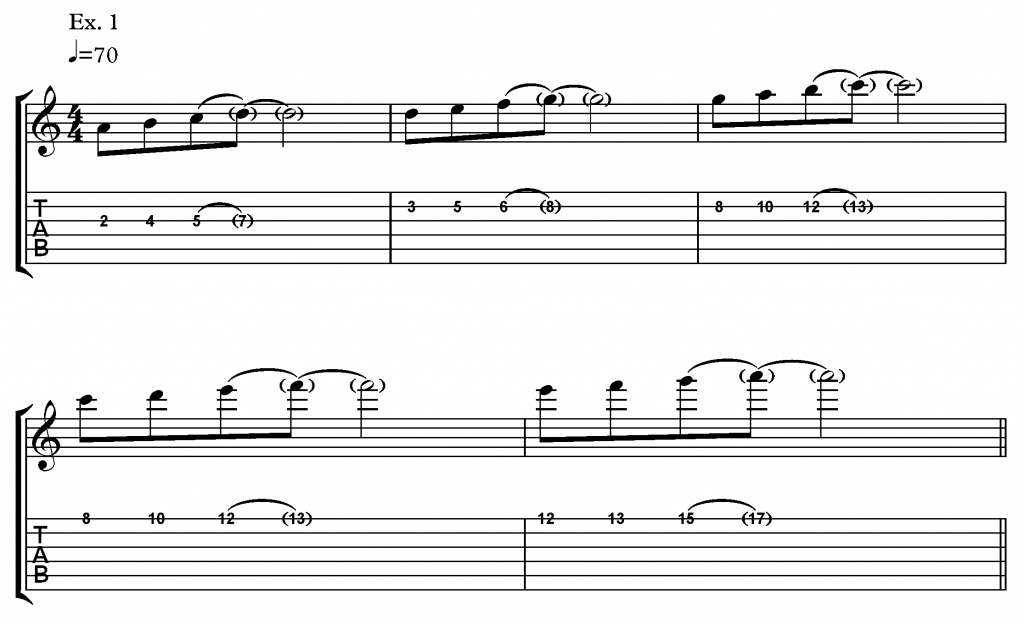 Being able to visualise and hear the notes you want to bend to within scale shapes will help you incorporate these ideas within your existing vocabulary when improvising. One way that you can do this is to practice playing a scale shape you know and bending up to the note in the scale from the highest note on each string. To help the bend feel more secure, use the first three fingers to play the three scale and then bunch them up to grip the string on the bend, rather than using the pinky as for normal scale fingerings.

Pre-bending is the technique of preparing the string before picking it. Then, with the string already bent, the pitch of the string can be lowered by releasing the bend back to the neutral position. Be careful to memorise the feel of the bend string tension to get the bend in tune without being able to tune it by ear as you would normally with a regular string bend. This will come quickly with a bit of practicing by fretting the note that you intend to bend to and then compare it to the note produced after bending silently.

Now to combine ideas from the first two examples to create a melodic phrase chock full of expressive bends. Take it slowly at first to ensure the transitions between each bend are smooth and seamless.

To take this technique further and learn some interesting bending licks check out my previous articles on advanced string bending ideas part one, and part two. Next time, we will look at playing more expressively by decorating melodies with trills and embellishments.

Recommended Listening: Many of the great electric guitarists have a distinctive and accomplished string bending style, but some suggestions of players that use bends to enhance melodic material from a range of styles include David Gilmour (Pink Floyd – Time), Marty Friedman (Megadeth – Hanger 18) and Stevie Ray Vaughan (Texas Flood). However, it would also be a great exercise to listen carefully to expressive singers from blues, soul or r&b and attempt to replicate the sound using bending and vibrato. Anyone from Aretha Franklin to Christina Aguilera would be a great place to start.