In this lesson, we are checking out three ideas in the style of the masterful Stevie Ray Vaughan. He was one of the most passionate players ever, combining his raw Texas blues prowess, and silky sounding jazz chords.

The focus of this example is the Emaj13 chord. It has a rich jazzy sound and breaks away from the normal major shapes that are too easily familiar. Often between chords, Stevie would embellish his licks, using a combination of techniques. In bar one he uses double-stops and hammer-ons and pull-offs, whilst in bar two he adds slides to the E major pentatonic.

Stevie was a master of combining open strings and minor pentatonic shapes. This example repeats a blues lick around the open E minor pentatonic, and then uses the same pattern around twelfth fret position. The open strings allow you to move across the neck and make your blues solos sound raw and authentic.

This kind of jump is a great way to extract maximum value from a single lick. Try it across different keys. The ending also includes the “Hendrix” chord B7#9.

This lick is built around the D minor pentatonic scale. It includes a “wrong” note, which is the b2 (the eleventh fret of the top E string). This sounds great when played at full speed, however make sure you don’t linger on the outside note for too long. In the second bar, there is a double stop bend. I personally use my third finger across both strings to play this although if you wish you can use separate fingers if this is too difficult. 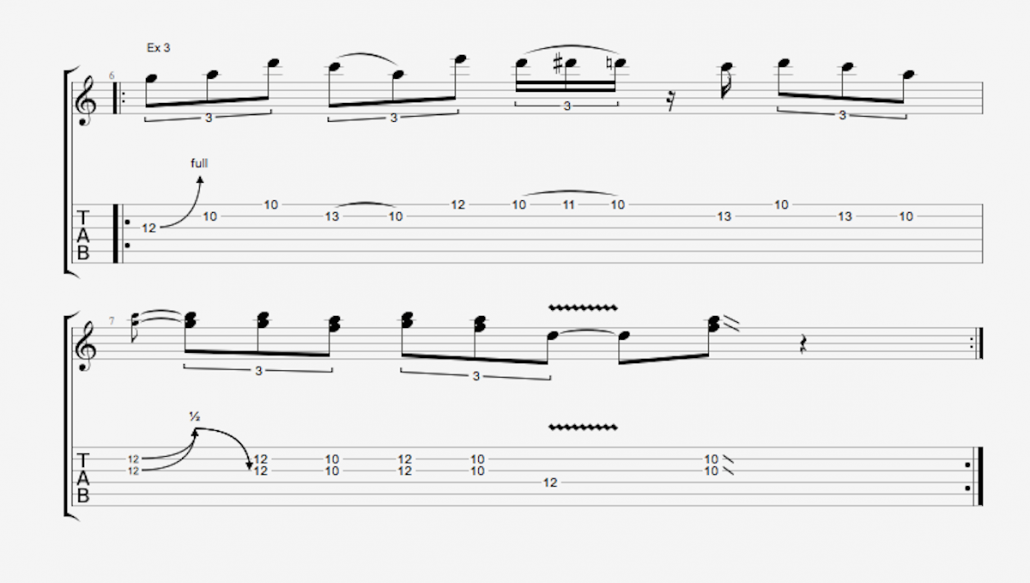 Hi guys, Simon here once again for Fundamental Changes. Today we are looking at 3 ideas in the style of the masterful Stevie Ray Vaughan. Let’s get to those right after this.

Example 1 introduces one of my favorite chords by Stevie Ray Vaughan. This is an E major 13. You may have come across this progression from the tune Lenny. We’ve got an open 6th string for the E, we’ve got 7th on the 5th, 6th on the 4th, 8th on the 3rd string, and then your little finger bars the top 2 strings in the 9th fret, not the easiest of shapes, but it’s well worth it.It has a really lovely, crisp, major sound.

Then you get a little run in E major pentatonic using slides, hammer-ons, and pull-offs. This little 2-chord trick introduces you to 2 of the greatest chords that he plays, and how he fills between them.

You don’t have to have a massive chord sequence, but you can make it sound really, really sweet. Let’s check it out right now.

Example 2, I wanted to introduce you to a couple of things that Stevie Ray Vaugn does technique-wise. He uses lots of open strings, and that gives it a raw blues intensity. He often uses the same lick in 2 different positions, or in this case, actually the same position, but 12 frets apart.

You’re going to play a classic blues run around the open E minor pentatonic, then play it again up 12 frets, but you’re using your open strings to go between each of these positions.

You can work on different licks in this style, it’s a great way to give that authentic raw Texas blues tonality. At the very end of the lick, you get kind of a classic blues turnaround, which ends in a B7 sharp 9, which is the Hendrix chord we checked out last time – If you haven’t seen that, click there -But we’ve moved it back down to B. this is quite a fun lick.

Bring in some open strings, and moving your licks 12 frets between positions, in the same shape is a great way to get value for the licks that you are playing. Let’s have a look at it.

Example 3 is what I like to refer to as Stevie Ray Vaugn’s wrong one. We’re up around the D minor pentatonic at the 12th fret, and in bar 1 we add in this 11th fret at the top string, which is kind of the flat 2nd or flat 9, which is kind of an outside note, which makes it sound quite jazzy to your blues licks, but you don’t want to hang around it too often.

In bar 2 we introduce a double stop bend, so bending 2 strings at the same time. This takes a little bit of practice. I personally use my 3rd finger or my ring finger to pull both strings down in the 12th fret.

If you’re finding this very difficult, you can use separate fingers, maybe your 3rd and 4th, your ring and your little finger to pull both of them down, but it is good practice to get used to pulling 2 strings down with 1 finger.

This is a really fun little blues lick, and 1 that I like to play, especially over different backing tracks, because it has that Stevie Ray Vaughan, that passionate feel that he brought out in everything that he played. Try introducing that into all your licks too, and make sure you move this one around into loads of different keys.

Hi everyone, thanks for watching this Stevie Ray Vaughan video. I really hope you got something from it.Each video lesson, we’re going to look at 3 different examples from your favorite players. Hit like, comment, share, and subscribe, and I’ll see you for the next video really soon.