In this lesson, we look at the ultimate rock guitar hero, Slash. Fancy hats, sunglasses and cigarettes hanging out the side of his mouth, all mixed with tasty melodic rhythm work and soaring solos make Slash a guitar hero. From Guns N’ Roses to his newer solo career he has always remained true to his style. In this lesson we see how Slash would approach an open chord riff, a melodic, almost vocal guitar solo, and a more technical lick as well. Let’s dive in!

In Guns N’ Roses tracks there were often multiple solos. Slash would create a very melodic, almost vocal solo as the first solo that appeared in the song. This guitar lick is all about creating that style. It is in G major Pentatonic and incorporates some melodic bends and hammer-ons. Try extending out this mini lick into a whole solo, using the principle of making it singable.

Here we see how Slash uses some of the notes from example two and creates a more technical lick around that theme. This is a fantastic way to build your soloing repertoire, especially if your piece has multiple solos included in it. 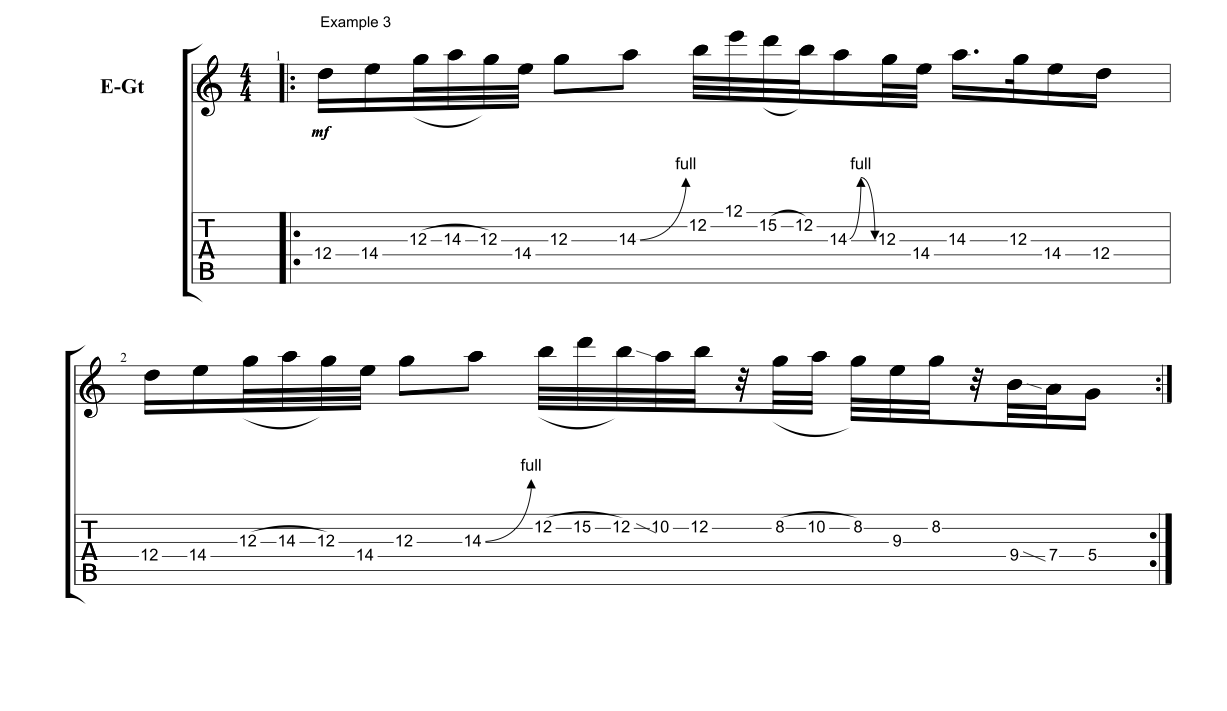 Hey YouTube! Simon here once again for Fundamental Changes. Today we’re looking at a few ideas in the style of the Rock King Slash. Let’s go and have a look at a few of these just after this.

Slash’s rhythm style shows a real delicate approach, and often uses lots of open chords, especially from his Guns N’ Roses days. This example, we’re around a G, A minor, C, G, and a D and a D sus. These are very basic chords, but once you add in a nice picking pattern with the right hand – I’m using a plectrum, not finger picking –  and some hammer-ons and some subtle additions, it shows actually, the value you can get from open chords.

Never neglect your open chords, as Slash often demonstrates. Let’s get to Example 2.

Often in Guns N’ Roses days, Slash would have multiple solos in 1 song, which is always fun when you’re a guitarist. The 1st solo in most of these songs was always usually a real melodic, almost vocal quality to it.

Example 2 here today demonstrates a little lick around the G major pentatonic, which is the same as your E minor, up around the 12th fret, but starting from the 2nd note, if you’ve not come across that, and it shows you just the vocal quality that can be had from some bends, hammer-ons, and some pull-offs.

Try extending this exact lick out into a bigger solo for a full vocal-like, solo quality.

Example 3 here today shows what Slash might go on to do in one of his latest solos in Guns N’ Roses days. He’ll take the similar kind of theme that we had in Example 2. It’s not by any means identical, but we’re up around the same place, and I add in far more techniques and ideas to that.

It’s a great way to build up solos in a song. Simple and melodic, and then getting to a stage where you’re adding in more techniques, flavors, styles. This one’s got bends, hammer-ons, pull-offs, rolling through the strings, but it’s still retaining an element of the vocal singable quality.

I hope this gives you some new ideas for your own solos. Please post any video responses, anything you want to see, I’m here to help you out as well, and Joseph I love posting these videos. Take care, I’ll speak to you soon.

Hi guys, thanks for watching these videos in the style of Slash. I really hope you got something from it. Please go and check out Joseph’s website Fundamental Changes for more lessons, tips, tricks, books, and go and have a look at my YouTube channel SDPguitar for more free videos.