In this lesson, we are checking out three guitar licks in the style of the blues legend, Eric Clapton. His style is universally revered and loved. With Eric Clapton, every note counts. Today we look at an acoustic chord example; a blues lick that helps you highlight chord changes, and raw double-stop call and response guitar lick!

Most people associate Eric Clapton with only electric guitar playing. One of my favourite albums by Clapton though is “Unplugged.” The chord example shown here is reminiscent of what Clapton does on that album. Notice the subtle embellishments to even simple chords like the open A major. The E/G# is a firm favourite in Clapton’s guitar arsenal and acts as a passing chord. Remember that’s an E major chord with a G# as its bass note.

This lick showcases Clapton’s use of repetition with variation. A classic way to maximise “value” from your licks. This lick would be played over the turnaround in a twelve-bar blues progression. A7 would be the underlying chord, right up to the final note where the chord would change to an E7. This shows Clapton’s understanding of the chords he is playing over. Try practicing over a twelve-bar blues backing, and see what notes you are hitting over the changes. If you take away the backing track, can you still hear the changes?

One of the most crucial elements in a well devised blues solo is using the “call and response” technique. In bar one and three, we have the same lick, and this acts as the setup to the phrase or “call,” in bar two and four we have two different responses. This technique will help you to structure your solos. 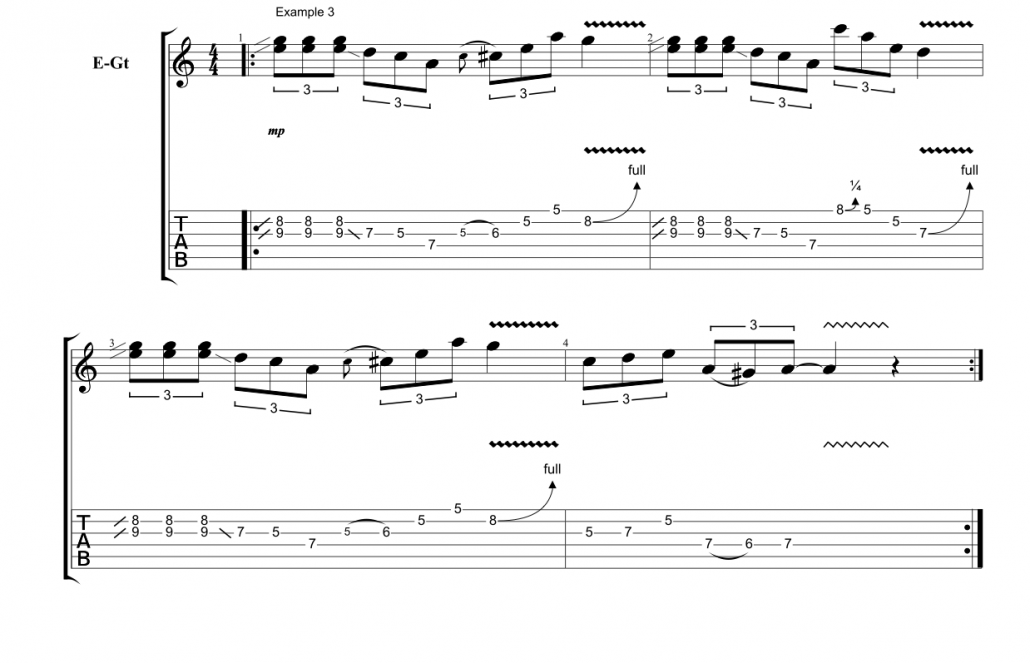 For classic Eric Clapton style guitar licks, I recommend buying the album “Clapton Chronicles.” My favourite track on that album being “My Fathers Eyes.”

Hey YouTube, Simon here once again for Fundamental Changes. Today we’re checking out the glorious style of Eric Clapton. Let’s have a look at that just after this.

As we saw in Example 1 there, we’re looking at a chord in the style of Eric Clapton. The chord I picked today is the E over G sharp. Now, this is a type of slash chord. I’ve mentioned that in a past video, but basically it means we’ve got the chord of E, but with a G sharp as it’s new bass note.

Clapton likes to use this a lot in his unplugged type stuff. I’ve played this lick on an electric for convenience today, but it works really,really nicely on an acoustic too. We’ve got a little trill around in A, A major. The new chord for you today in E over G sharp, which acts as a passing chord, is C sharp minor 7, which is your C sharp minor without the little finger, a G sharp dominant 7, and then A, B, and E.

It’s quite a nice little acoustic-y sounding lick, and you can start to try adding in this little passing chord, but between chords. So for example you’re going to be here’s my E, there’s my E over G sharp. You can see you’re going up to the 4th fret there. You could go G, and then move the same shape up, move this little passing chord around, try and bring it in your playing between this, or just move this whole progression around with a capo as well. Enjoy that, E over G sharp.

The mini technique here today is hearing the changes. What I want you to imagine for this lick, is it’s like the end of a turnaround of a 12 bar. Most of it’s around an A7, and then around the final note, we’re hitting the E7, and you can hear that because we’re landing on the note of E on the 5th fret of the 2nd string, the B string.

We’ve got a repeated little lick here. We’ve got a bend, a roll through 5-5, bend at the 7th fret, 5-8 on the 2nd string. This repeats, kind of a fun little repeating pattern, and imagining in your mind, and then I’ve gone to an E7 on the end, and then I’ve got the note of E there as well.

This is a little one. Use your ear whenever you’re playing over 12 bars of different progressions. Start to really analyze what the chord is underneath what you’re playing, and hear the specific notes over the different changes.

So, concentrate on your changes, that’slick number 2.

Lick number 3 there was the lick in the style of today. This one revolves around some double stops that we’re sliding into the frets of 9 and 8 on the 3rd and 2nd string, coming down, little hammer-ons, moving it around, and then building a little sequence where we do a call and a response.

We start off with 1 lick, and bar 1, and we do a slight variation of that lick, which is the response, then we go back to lick 1 again, which is the call, then we have a slightly different response. On the very end of bar 4 here we’ve got something that Clapton likes to do a lot, which is he goes root note, 7th fret on the 4th, 6th fret of the same string, back to the 7th fret, so he does this little semi-tone guiding note, even over different progressions, this one being mainly over an A7.

So, it’s an outside note, but he applies it just to add a little bit of flavor, a little bit of characteristic there as well. Soa couple of things to bear in mind from this lick, nice little double stops, gentle bends, and then making the most of every note, really milking it, and these tiny little semi-tone additions you can add into your playing as well.

Hope you’ve got something from these videos. I’ll see you soon.

Hi everyone, thanks for watching these 3 licks in the style of Eric Clapton. I really hope you got something from it. Go check out Joseph’s website Fundamental Changes, and go and have a look at my YouTube channel, SDPguitar as well for more free lessons. Check in next time.