Anyone has played jazz rhythm guitar for longer than a week will have come across the ii-V-I progression due its extensive use in jazz and popular music.

Because of the popularity of this progression , there’s no doubt that learning to solo and comp over it in a variety of ways will make you a better jazz guitarist.

Whether you’re new to jazz guitar or a more advanced player this article aims to provide you with some new sounds that you can incorporate into your jazz guitar playing.

A thorough knowledge of the theory behind the ii-V-I and why it works is essential, so lets check it out before we begin blowing over it.

The reason this progression is called the ii-V-I is because the chords come from the 2nd, 5th, and 1st degree of the parent major scale. The example below shows the C major scale and the highlighted notes which represent the degrees of the scale in which the ii-V-I is constructed from.

The chart below shows how each degree of the major scale can be harmonized in close-position voicings to form the chords, but every harmonized major scale should be practiced with other jazz guitar voicings such as drop 2, drop 3, and 4th voicings.

The harmonized major scales should be practiced in all 12 keys, because so many progressions come from this scale it is important that jazz guitarists be able to identify the degrees quickly when working on tunes.

Now that you have an understanding of how the ii-V-I is constructed let’s check out how we can apply these chords over the guitar neck.

The next chart shows how you can construct ii-V-I voicings across the adjacent string sets using drop 2 and drop 3 jazz rhythm guitar chords. 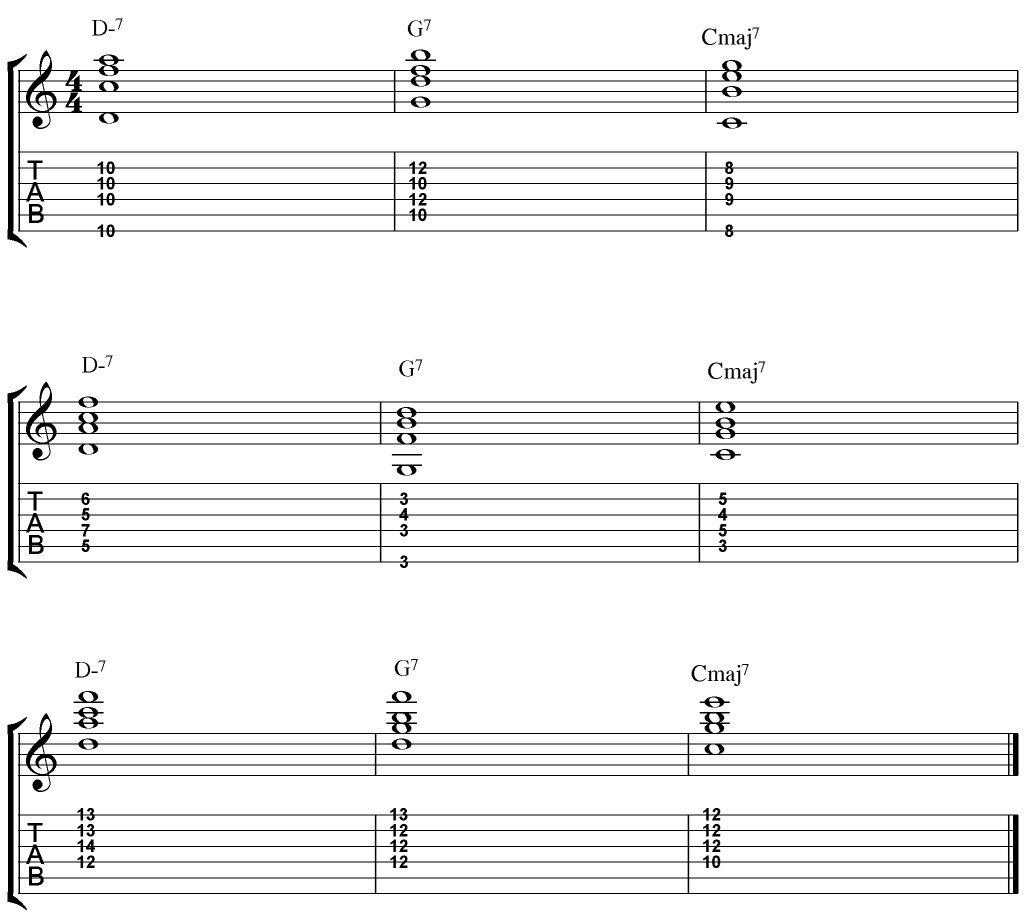 Notice the movements within each chord, take note of how the harmony is changing rather than just memorizing grips.

The first two examples are effective voicings that you can use in duo settings with the four to a bar comping style, where as the voicings on the last examples are great for constructing solo guitar arrangements and taking chord solos as the melody note is on the top string.

As cool as these chords sounds further crunch can be added to how the ii-V-I is are played by applying various different chromatic voice leading jazz guitar techniques which are explored on the next page.

In this first example the ii-V-I is voiced so that the top note of the chord is chromatically ascending.

The G7 is particular spicy here as the raising melody note means that Bb is the melody note, and I’ve also included an Eb within the voicing providing a crunchy G7b9b13 resulting in an altered sound before resolving to C major 7.

This example provides a juicy b9 melody note (Ab) over the G7 using the popular diminished shape before resolving to a C major voiced in 4ths in the last bar.

Another good exercise when voicing chords is to see how long you can keep the same note on the top string for.  In this example I’ve kept the ‘E’ on the top E string for all three chords.

This is a cool sound because you can hear the harmonic function of the note change within each chord. Over D-7, the ‘E’ is the 9th, over G7, the 13th, and finally the 3rd on the C Major 7.