Chords on Guitar: Understand and Play

In this lesson you will learn to play all the essential chords on guitar, and develop understanding of the theory and function of each one.

A chord is defined as any group of three or more notes played together. They are normally formed by stacking notes on top of each other from a particular scale. Most of the chords in this book are formed from harmonising the major scale.

To form a chord, we simply stack alternate notes from a scale. For example, in the scale of C Major:

The first, third and fifth notes of a major scale form a major chord. This is true of any major scale. This chord is given the formula 1 3 5.

The formula 1 3 5 gives us the notes C E and G, however, we can alter any of the notes to form a different type of chord. For example, if we flatten the third we generate the formula 1 b3 5. Using the root note of C again, we now have the notes C Eb G.

As you can hear, this structure has a very different sound from the previous major chord.

Any chord with the structure 1 b3 5 is a minor chord. In fact, any chord that contains a b3 is defined as a minor sound.

We can also flatten the 5th of the chord. The structure 1 3 b5 is not very common in music although it does sometimes occur in jazz. However, the structure 1 b3 b5 occurs frequently. It is called a diminished or occasionally a minor b5 chord.

The formula 1 b3 b5 built on a root of C generates the notes C Eb Gb.

This is a bit of a stretch to play on the guitar, but the notes do not have to be played in this order. They can be played more comfortably like this:

To achieve this voicing I moved the b3 of the chord up by one octave.

As you can hear, the diminished chord has a dark and sinister air to it.

The three triads you have learned so far are

Most chords on guitar you come across, no matter how complicated can normally be categorised into one of these basic types. Jazz chord progressions however are normally formed from richer sounding ‘7th chords’ which are the focus of this book.

There is, however, one more permutation that crops up occasionally, it is the augmented triad, 1 3 #5.

From a root note of C, the notes generated by this formula are C E G#. There are two tones between each of the notes of the chord.

Two useful voicings of the augmented (Aug) triad are

Finally, there are two types of triad that do not include a 3rd. These chords on guitar are normally named ‘suspended’ (or just ‘sus’ chords), as the lack of the 3rd gives an unresolved feel to their character.

It is first important that you learn to play some useful chord voicings of these basic triads as they do sometimes occur in jazz chord charts, especially in early ‘swing’ jazz.

In any chord, it is acceptable to double any note. For example, a major chord could contain two roots, two 5ths and only one 3rd. There were rules to govern their use in ‘classical’ times, although these days there are common chords on guitar shapes or ‘grips’ on the guitar that are frequently used.

As the focus of this book is on 7th chords, which are more common in jazz, only a few of the basic triad chord shapes are shown here. 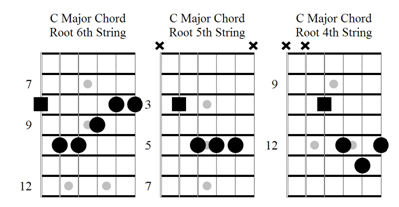 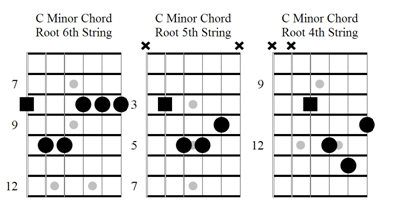 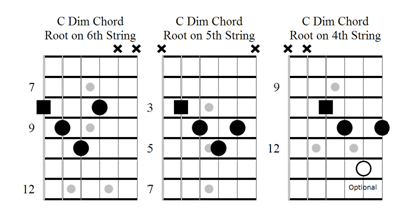 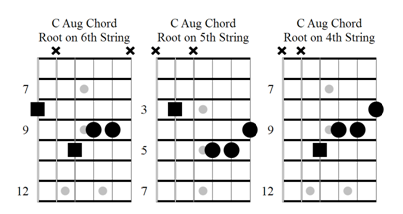 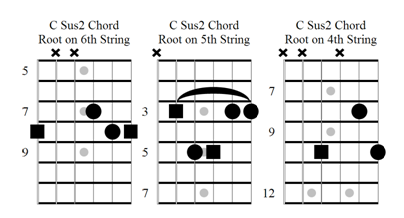 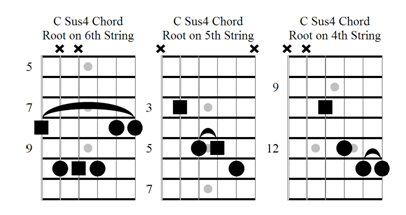 You probably already know most of these chords on guitar, but if you don’t, my advice is to ignore them for now while we get focused on 7th chords. You can come back to these voicings as a reference when you need them. 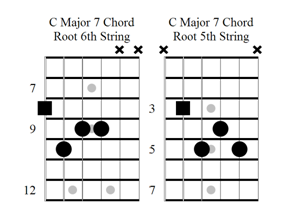 In these voicings, I have changed the order of the notes to make the chords on guitar playable. The chord is now voiced 1 5 7 3. 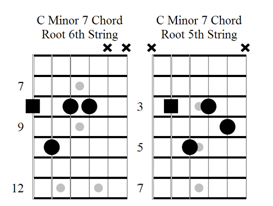 Once again, the notes in the lower chord voicing have been rearranged to make the voicing playable on the guitar.

As you’re probably wondering, a minor triad with a natural 7 on the top 1 b3 5 7 is called a “minor major 7th” or m(Maj7) chord and we will discuss these structures in chapter twelve as they are an important sound in jazz. They are given this name because they are minor triads with a major 7th added on top.

As you can see in the previous paragraph, this is not always the case, so be careful when applying that ‘rule’.

A (diminished) minor b5 chord with an added b7 has the formula 1 b3 b5 b7 and generates the notes C Eb Gb Bb when built from the root note of C. This chord is named ‘Minor 7 flat 5’ or m7b5 for short. It also is common for m7b5 chords to be referred to as ‘half diminished’ chords. 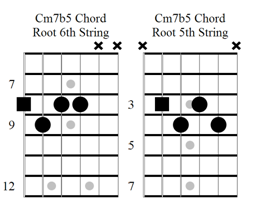 Finally, we come to one of the most common jazz chords on guitar; the dominant 7 chord. It is formed by adding a b7 to a major triad. 1 3 5 b7. With a root of C this formula generates the notes C E G Bb.

Because of the fundamental major triad 1 3 5, this chord is a ‘major’ type chord, but the added b7 gives it an extra bit of tension. 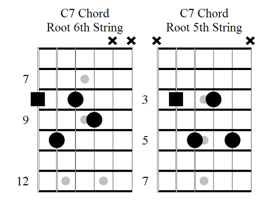 These four chord types can be summarised:

It is the modern way of thinking that all chord types in jazz function in one of the above contexts. We will discuss this at length later, although what this means in simple terms is that even a complex chord, such as C7#5b9, can be viewed in its simplest form as just C7.

A C Minor 11 chord can be simplified to become a Cm7-type chord and a C major 9th chord can be reduced to a Cmaj7-type chord. This is very useful when viewing jazz tunes from a soloing perspective. There are a few exceptions to these rules when playing chords, and those will be addressed individually.

This idea of chord ‘types’ or families is especially useful when we’re starting out playing jazz chords, or when we’re given a particularly difficult chord chart to read with little preparation time.