This melodic sequences on guitar lesson teaches you the important scale patterns that build fluency and melodic vocabulary on the guitar. These sequences will initially be given around the first position of the Major scale before being applied to the other Major scale shapes and different types of scales.

Melodic sequences are small, repeating melodic fragments that gradually ascend or de-scend a scale. These patterns teach us new melodic possibilities while building our tech-nique, confidence and fluency.

Each pattern is taught around the following scale shape. Make sure you can play it fluently both ascending and descending before tackling the different sequences in this chapter.

As with any scale diagram in this book, the root of the scale is shown with a square marker. 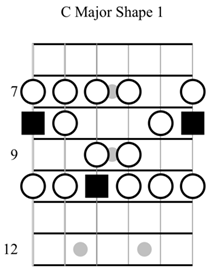 On page 11 there is a concise practice schedule that you should stick to when learning the melodic sequences in this chapter. Once you have learnt the sequences it should take no more than five minutes to complete this routine each day.

The reason for this strict approach is to make sure you are coming into contact with as much material as you can each day, and to teach you healthy practice habits.

Imagine a scenario where I told you to pick the most difficult pattern and play only that un-til you had it mastered at a fast speed. It may take you a few days to get it down, and even then it may still be a bit shaky. You’ve now spent maybe three days working on just one pat-tern that you probably won’t be confident enough to use musically, and, more importantly, you’ve lost many opportunities to learn other useful musical patterns that could have been of more benefit or easier to play.

Just because a pattern is harder, it doesn’t mean it is more musically important. In fact, if a pattern is really hard, and you do spend a long time mastering it, you will have trained your fingers to become locked into that pattern, so it’s all you can now play. If you find something extremely difficult, you may not be ready for it yet. Maybe your technique needs a bit of work, or maybe you don’t know the scale well enough. If this is the case, learning easier patterns that you can actually use will prepare you for the more chal-lenging ones, and help you to become more familiar with the scale pattern.

By practicing easier things first you will feel more of a progression in your ability and asso-ciate positive, rather than negative feelings with your guitar.

When you have played through the complete schedule, stop and take a break. Then move on to an exercise that uses one of the melodic sequences in a creative way. These ideas are shown in Chapter Five.

When the timer goes, always stop. This again builds positive emotions when you play.

If you want to continue your practice after the timer goes, it’s probably because it’s either going really well or because it’s frustrating you.

If your practice is going well and you decide to continue past your timer, you will eventually hit a point of frustration and put your guitar down. This means that you’ve left your guitar while in a negative state and associated negative feelings with practice. Quit while you’re feeling positive and you will always come back to practice feeling enthused.

We all have days where practice isn’t going well and we get frustrated. The trick here is to be observant as to which specific things are challenging you. Keep working until the timer sounds, because sticking with something that is tough is an achievement in itself. After your practice, note down what was specifically challenging you and take a break.

If you keep going after the timer finishes, you will mentally exhaust yourself and be useless for the rest of the day. When it’s time to practice again you will remember these negative feelings and avoid picking up the guitar.

If you stop when the timer goes, you will have taken ownership of the task and kept control of the situation. You can approach the guitar later knowing that you’re the boss. It’s OK for things to be challenging, but know that there’s no hurry to progress and that you can own your practice.

Stick to the following schedule and move on when your timer goes.

This chapter contains eleven melod-ic sequences that ascend and descend scales. The following table will help you to organise your time.

For the first few days, focus on learning all the patterns in position 1 of the Major scale, but on later days apply the pat-terns to all five shapes shown on page 15.

This may look like a time-consuming task, but as your skills develop each example will only take a few seconds to play. You will eventually be able to ascend and descend through each example in this chapter in under four minutes when playing 1/16th notes at 90bpm. For hints on how to develop speed, turn to page 16.

Don’t worry if you don’t reach the required speed each day, these ideas take time to mas-ter. Keep track of the tempo at which you can play each exercise and start a few bpm below that point each day. Also, focus only on the asterisked (*) exercises as these are the most important ones to master.

In the following sequences, only the first two bars of each ascending and descending pat-tern are shown. If the full exercise was written out for each melodic sequence, this book would sink a battleship!

Two bars is enough time to get the pattern into your ears. Also, your fretboard skills will benefit greatly from having to use your ears and eyes to continue the sequence through the rest of the scale shapes. This is a fantastic opportunity to memorise the scale pattern.

The following exercises can be played over any chord sequence in the key of C. You can use backing track one while you practice.

Melodic Sequences on Guitar Example 1a: *

Melodic Sequences on Guitar Example 1b: *

Melodic Sequences on Guitar Example 1i: *

When you feel you have mastered one or two patterns, flick forward to ChapterFive and use it with the musical creativity exercises.

The next, very important step is to apply these patterns to the other four C Major scale shapes below to develop the same level of fluency in all positions.

In Part Two, you will learn how to use these five shapes to easily play any Major mode, so building familiarity and fluency now will be very beneficial to you. There are seven modes of the Major scale played using these shapes, so the benefits of any practice you do here will be multiplied by seven when you learn to use these shapes as modes.

Including the first shape that we have cov-ered, the five shapes of the Major modes can be played as follows: 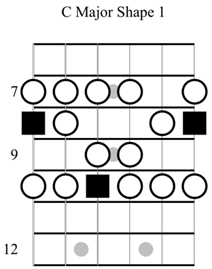 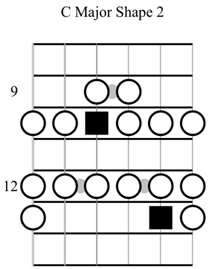 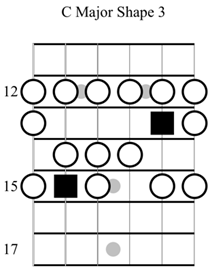 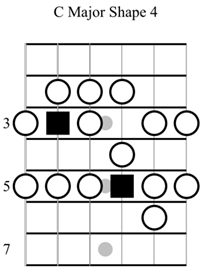 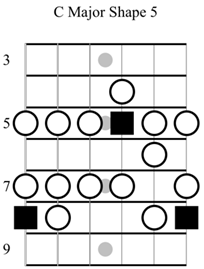 The following example demonstrates how to apply a pattern you know to any different shape.

Here is the melodic sequence from example 1a:

You probably already know this pattern well in shape 1, so it shouldn’t be too hard to apply this idea to shape 2. If you’re happier reading the top notation part, make sure you take a quick look at the tablature line to see where this melodic sequence is played.