Welcome to a brand-new video series on memorable guitar soloing! Each lesson we will explore different ways to make your guitar solos more exciting. This week we are checking out how to make your solos sound more melodic and singable.

Throughout this series, the following chord progression will accompany each lick and technique. You can experiment by replacing the ‘A’ and the ‘E’ chords as open chords, or using different voicings if you wish.

The C#m pentatonic scale (C# E F# G# B) should hopefully feel very comfortable to you, but if it doesn’t make sure you familiarise yourself with it before completing the following examples. This scale will form the basis for the majority of the licks seen throughout this series, as it is both accessible and versatile.

The C# blues scale (C# E F F# G# B) adds in the note of F, to the underlying C# minor pentatonic scale. Although called the blues scale, this scale works brilliantly over jazz, rock, pop and funk as well.

Solo one is based around the C#m pentatonic and introduces bends, vibrato and slides to a melodic theme. The melodic structure of this solo is reminiscent of Slash in his early Guns N’ Roses days, where his first solo in tracks would always be singable and fan favourites.

Solo two is extremely similar to solo one but introduces a hammer-on in bar two, and the final slide is up an octave. Just by applying a couple of changes to the original solo you have created an extension of the solo melody.

Solo three uses the same melodic theme seen in both solo one and two but puts all the notes up an octave. This simple yet effective idea is used by guitar instrumentalists such as Joe Satriani and Steve Vai. The ‘Steve Lukather’ bend seen in bar two is made by adding your little finger onto the high E string while the 14th fret is already bent. Make sure you watch the slowed down video on YouTube to clearly see how to apply this technique.

Once again maximising our melodic guitar soloing vocabulary, here we see the same solo as solo three with just the one alteration of the final slide being placed up one octave. At the end of the YouTube video I play all four mini solo’s together, so you can see how from a very simple melodic theme you can build a longer memorable solo.

Hi YouTube, Simon here once again for Fundamental Changes. Today we’re starting a brand new series on creating your own memorable solos. Let’s go and have a look at a few examples, just after this.

Now, in the article, you will have a tab to these chords and the scales I’m just about to talk about. The 2 scales we’re using today are the C sharp minor pentatonic scale, and the C sharp blues scale. Once again, those will be tabbed in the article itself when that comes up.

The solo 1 – what we’re mainly talking about today is in creating your own memorable solos. My number 1 tip for anyone in being able to make something sound memorable is to make it melodic and singable.

I personally don’t think there’s anything more important than creating something that’s melodic and singable when creating a solo. I’m not saying there can’t be flashy bits, there can’t be other bits, but your number 1 priority is, can you sing it back, and can someone else sing it back?

The other 3 examples are based around this one melody, to build on a fuller sounding solo. Let’s go and have a look at Example 2.

There we saw Example 2. As you can tell, it’s very, very similar to Example 1. We’ve just got a slight addition with a hammer-on, and then the last 2 notes are up an octave from where they were in the 1st example.

Let’s go and have a look at Example 3.

Something that I like to do and – nearly all players like to do when they’re building these types of solos, is if you’ve got a nice melodic theme in 1 area, then once you’ve played it through in that area a few times through, move it up an octave. That is a really, really cool little technique there.

We’ve got our main part going on between the 9th and the 12th frets, position 1 of our minor pentatonic. Now we’re moving into position 2 up around the 12th and 14th frets predominantly here.

Now, there is 1 technique I need to point out here – I call it the Steve Lukather bend because he sort of invented this. When you’re bending up the 14th fret, what you’re going to do after a couple of picks of that, you’ll see when I’ve played that in Example 2. I’m putting my little finger on the same string to create an extra note above where the bend is – a virtual 17th fret there as it is in the tab, but you’re not actually picking the 17th fret on its own, you’ve bent up the 14thfret, and then you’re putting your little finger on the same string – on the top high E string – in the 15th fret there, and you’ve created this little Steve Lukather bend.

Let’s go and have a look at our final example, Example 4.

Okelydokely, there’s Example 4. As you can see tell, it’s identical to Example 3, but the slides are up high as opposed to the 12th and the 14th there, up around the 21st and the 19th frets of the top string.

So, what I’ve tried to demonstrate here in our creating memorable solos part 1? Absolute fundamental principle is make it something you can sing back. As Jeff Beck famously said, “It’s better to play 1 note well, than a thousand notes badly.”

I cannot stress that enough in terms of my own playing, and the people that I teach, that I’d far rather hear 1 little simple phrase played beautifully than absolutely shredmongernaffness, if you like.

Make it singable, melodic, use your scale that fits over the chord progression, today as I’ve said, we’re using C sharp minor pentatonic, C sharp blues over this 4 chord pop rock progression. Then start to add in your specialist techniques: bends, vibrato, hammer-ons, pull off, and slides, your 5 core elements that you can use in any solo with the notes that you are working on.

Try and repeat it back in different octaves, so you can start to apply this in different keys, you can move it about the place. I really hope you got something from this. We’re going to go in more detail about how to create your memorable solos over the next few weeks.

Any questions, comments, please leave them below. Take care, I’ll see you soon.

Any comments or anything you want explaining in more detail, please leave them in the comments section below. I will get back to you as quickly as possible. Take care, speak to you soon. 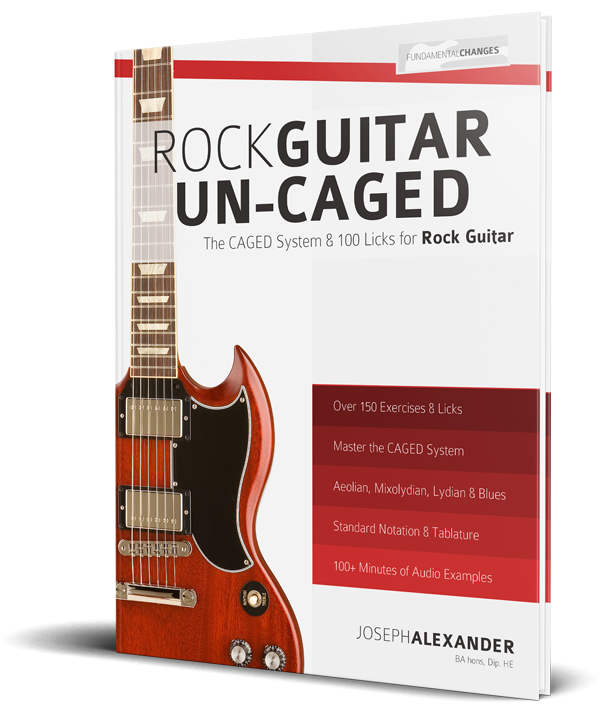