This lesson on how to play lush open chords is taken from my new book First Chord Progressions For Guitar. 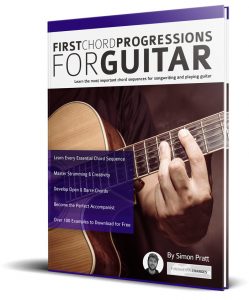 I created a video lesson on how to apply these techniques. Check it out here:

A suspended or ‘sus’chord is one that replaces the 3rd with either the 2nd or the 4th. 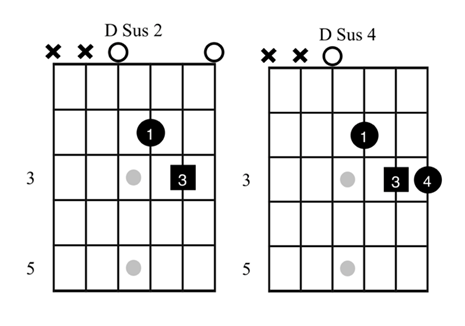 I love playing open chords! They have a ringing quality which is hard to match with barre chords. I find them especially useful when it is just a vocalist and myself.

Example 6a demonstrates the two new chord voicings of Dsus2 and Dsus4. A suspended chord has an airy quality to it and can be used to replace either a major or a minor chord shape. U2’s guitarist The Edge is synonymous with playing these chord voicings with lots of reverb and delays.

Strumming these chords with a syncopated rhythm that includes rests works equally well.

Another common place to play open suspended chord voicings is in the key of ‘A’. Example 6c shows the Asus2 and Asus4 chord shapes. 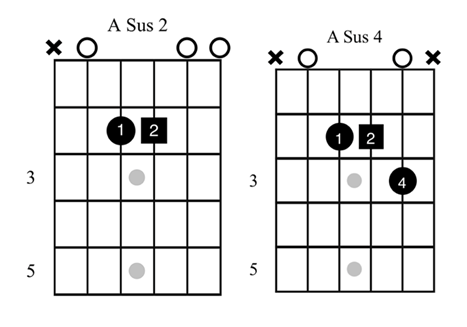 Check out James Taylor’s masterpiece Fire and Rain for an example of this chord in action (you’ll need a capo to play along in the original key.)

Another useful suspended chord voicing is the open Esus4 shape.

Instead of playing a traditional open A, D, and E chord progression, example 6e includes the new suspended chord voicings learnt in the previous examples.

Check out my brand new book First Chord Progressions For Guitar to learn the most useful chord progressions on the guitar, quickly master creative application and theory and boost your song writing abilities.