It’s easy to be seduced into the temptation of constantly shredding every note at lightning speed, however it’s important not to discount the subtle beauty that comes from a smooth legato sequence. If you’re able to drift between a smooth legato technique AND lightning shred, you’ll be a more versatile and more listenable player. It’s also incredibly important to be able to express passages of notes in different ways, other than ‘picking the living bajebus out of everything’.

Some of the sexiest phrases I’ve heard have been heavily based on the legato technique. You can see it utilised very tastefully in players like Joe Satriani (the whole Surfing With The Alien album is full of sweet legato runs), Alex Skolnick, Guthrie Govan and Chris Poland to name a few. But, “What exactly is legato?”, I hear you ask?

‘Legato’ comes from an Italian word meaning “notes flowing together smoothly” or “notes tied together”, which is the opposite of ‘Staccato’, which simply translates to “notes played sharply and separate from one another”.

In this chapter, we’re going to be looking at a bunch of shapes, exercises and drills to get you legatoing (not a real word) smoother than the top of Kerry King’s head, a fine Kentucky Bourbon or a Crème Brule cooked to perfection.

The first major issue that arises from using the legato technique is the lack of picking. This may seem like an obvious “well derrrr” moment, however when you remove picking significantly from the equation, a lot of the burden falls on your fretting hand which can result in sloppiness, forearm and finger fatigue and the most offensive of all, uneven volume of attack from note to note.

So let’s start with something simple. We’ll look at an ‘A’ minor pentatonic ascending low to high using 1 hammer on per string.

The hammer on technique is relatively easy to get your head around, as you can just slam you finger down to the next note after a plucked note. It is a very “reactive” technique in that doesn’t involve much preparation. The pulloff technique that is used in legato is a lot more complicated. Let’s take a look at the same ‘A’ minor pentatonic shape, but we’ll descend high to low and use pulloffs.

One of the main issues that players face in the early stages of developing the pulloff technique is that they’ll treat this legato concept as a “reverse hammer on”, in that the descending notes are played one after another, hammered on backwards, in a “reactive” manner. Ideally you need as many notes “pre-prepared”, all held in position like a chord, but all fretted on one string. After the string is played you can pluck and roll off the fretted notes to reveal the notes behind the initial picked note. This is THE KEY to smooth descending legato.

To make things more complicated, let’s try a 3 note per string ‘A’ Aeolian shape with only hammer ons in an ascending manner.

As you can see, the premise and execution is very similar to that of the 2 note per string ‘A’ minor pentatonic we looked at earlier, the only difference is we’re rolling to two hammered notes per string instead of just one.

The last thing we’ll look at is a descending 3 note per string ‘A’ Aeolian shape using the rolling pull off technique. On each string try the pre-prepared method of rolling legato ie. on the first string hold 10th, 8th and 7th fret at the same time and after the picked note, roll through the 3 note sequence.

Probably the last and most important thing to monitor is volume consistency. Your legato passages and runs will sound terrible if your legato notes are weak and a lot quieter than your picked notes. This takes time, but it’s important to pay attention to your fretting hands plucking articulation and making sure the legato attack matches picked note attack.

Now that we have some of the fundamentals down, we can delve into oddly timed legato, working in groups of 5s and 7s, we can look at string skipped legato and a bunch of other interesting ways we can use this awesome technique!

To get much deeper into legato playing, check out ultimate Shred Machine by Chris Zoupa now. 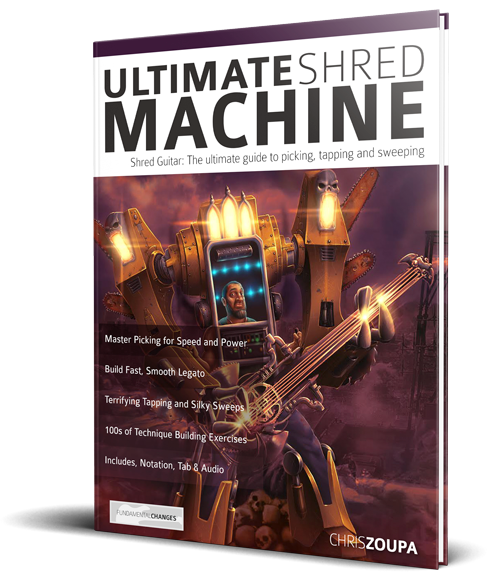 Learn to Play the New Jimi Hendrix Song Somewhere
Hi, we use cookies to make this website better. For the best experience, please accept cookies. We will never sell your data to third parties.I AcceptNo CookiesPrivacy policy
Revoke cookies
Scroll to top