Chord Melody is a big subject, but it can be broken down into some important basic elements. The first is how to add melody to chord fragments.

Let’s dive in and begin by playing up the chord scale of G Major with the root on the sixth (E) string. The 10th is played on the third (G) string. Here’s an ascending idea that adds simple decoration to the 10th.

Next, let’s play that idea descending.

Here’s another ascending idea that adds a simple step-wise melody to the 10th:

Now play it descending the neck.

The following idea is more intricate.

I advise you to explore as many possibilities as you can find with this type of movement on the 10th.

This lesson is a tiny sample of my best-selling book, Martin Taylor, Beyond Chord Melody. 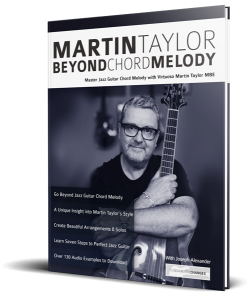