Welcome back to our series on hybrid picking! In part one we looked at using the fingers and pick to play chords and some basic banjo rolls. For this installment we will be taking on ideas that might otherwise be played with straight alternate picking, but are made much less daunting by the use of hybrid picking.

One technical hurdle that some players encounter (myself included) is the difficulty in performing an upstroke with the pick followed by plucking with one of the fingers. It feels infinitely more natural and fluid to precede fingers with a downstroke. To circumvent this problem it may be necessary to plan the picking accordingly and start a series of alternate picked notes on an upstroke when a downstroke would be normal if this meant the notes plucked by fingers are then directly preceded by a downstroke, even when it occurs on an off-beat.

Example 1a is a little primer exercise to get the picking hand warmed up for the main three examples. We are just alternating m and a downstroke, before alternate picking the low note and interspersing the high notes. Hybrid picking’s tonal differences really help here as the finger adds a pleasingly snappy twang to the high notes that a pick stroke would not achieve. 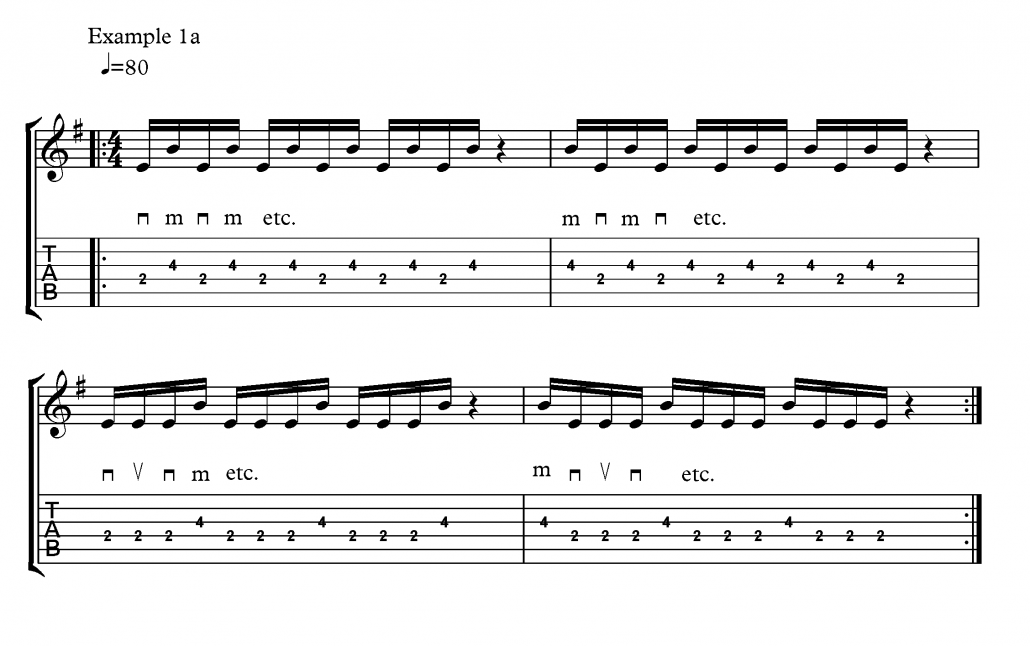 Conversely, it’s worth paying attention to the dynamic differences between the pick and fingers. The aforementioned twang should be an option, and you should aim to have enough control to be able to blend the two as well. This will take some careful listening, and if possible, recording of your playing to be able to judge how softly you need to pluck to match the dynamic level of the pick. 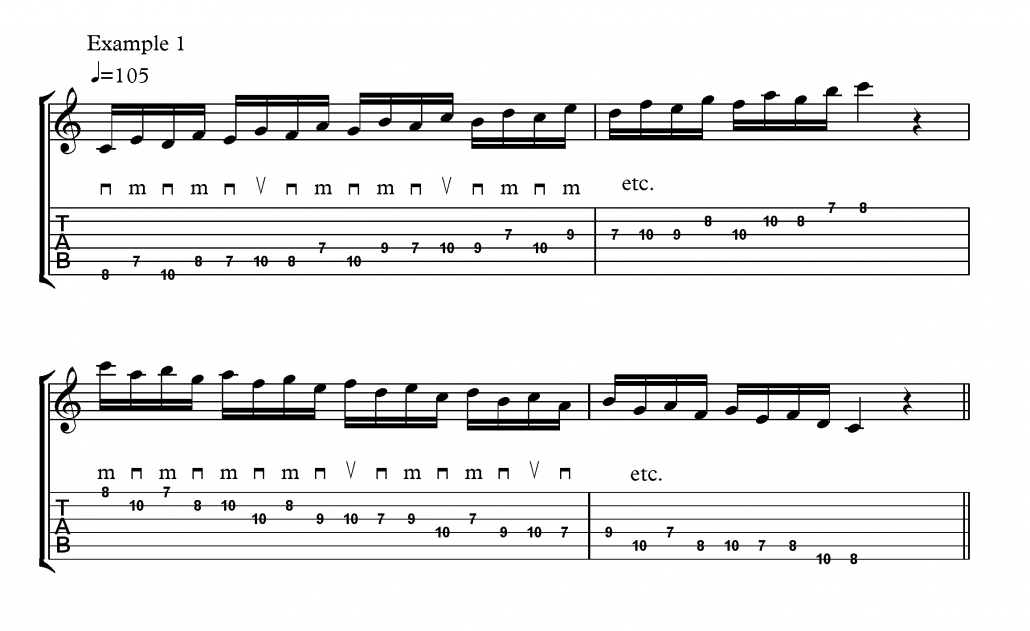 This example demonstrates clearly the advantage of hybrid picking over alternate picking for ideas which feature lots of string skipping. The entire passage could be picked using alternating down strokes and middle finger plucks, even when they occur on one string, but I have opted to include upstrokes when there are no string crosses to be made. 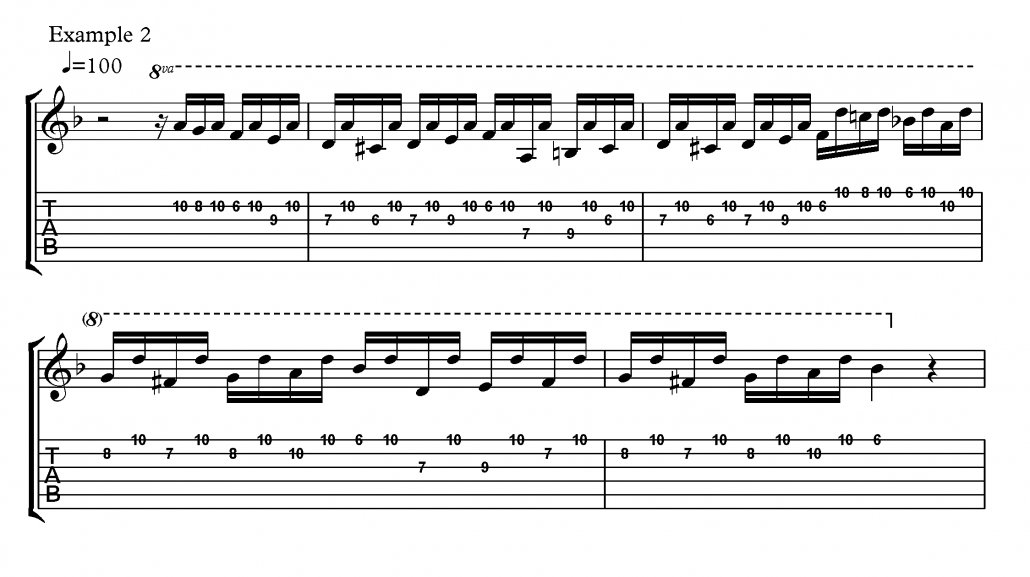 It is an extract taken from J.S. Bach’s famous Toccata and Fugue in D minor (originally for church organ). The extract starts with standard alternate picking, and then once the notes start spreading out across the strings, move to alternating a down stroke of the pick and the middle finger. The melodic device of alternating a moving melody with a repeating note is known as pedal-point, and was very popular in Baroque music.

Once you have the passage down, try to play it with distortion. These harpsichord phrases make great rock licks too so long as you phrase round them effectively!

Now for a little bit of Paganini! This example from his 16th Caprice in G minor builds on the Bach extract, but by comparison jumps across the strings in a much more dramatic fashion. There are sections of alternate picked, and economy picked notes as needed, interspersed with the hybrid picked notes.

The violin, by virtue of its small size, and the fifths tuning, makes playing wide leaps a little more manageable, but on the guitar it is a different story. Make no mistake, this is a very demanding extract (from a demanding piece as a whole!) and you will do well to break it down slowly, paying close attention to the picking directions I have notated. Unwanted noise can occur easily because the wide string jumps makes muting with the fretting hand a little more challenging. 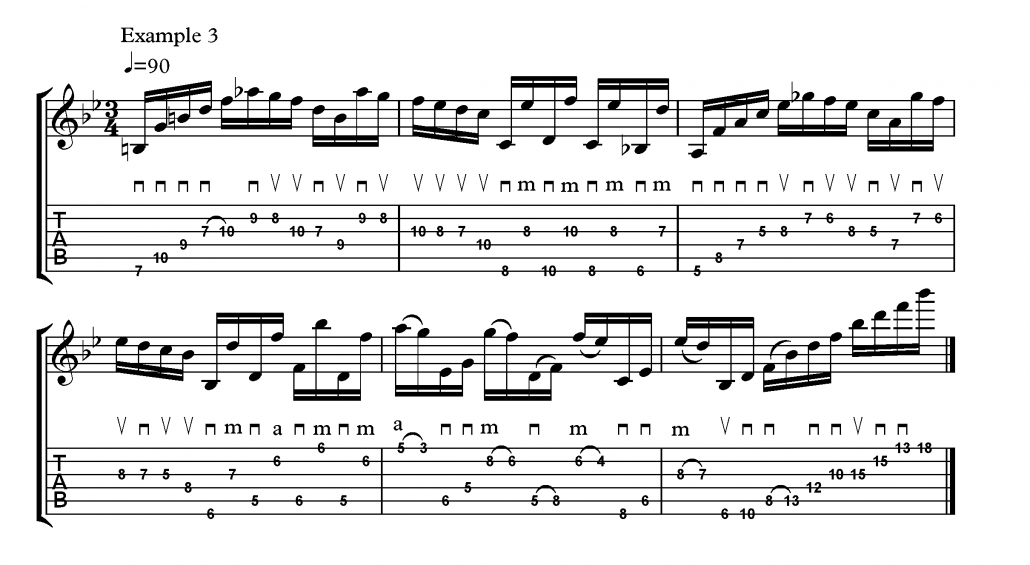 In next week’s article I would like to show some classic country hybrid picking licks that players of every style can and should try to incorporate!

Recommended Listening: For now, have a listen to Brett Garsed, Guthrie Govan and Kiko Loureiro (Angra) to hear stunning examples of hybrid picking used in their lead guitar styles. Yngwie Malmsteen, though not known for hybrid picking, frequently incorporates pedal-point licks such as ex. 2 into his soloing so listen out for that!